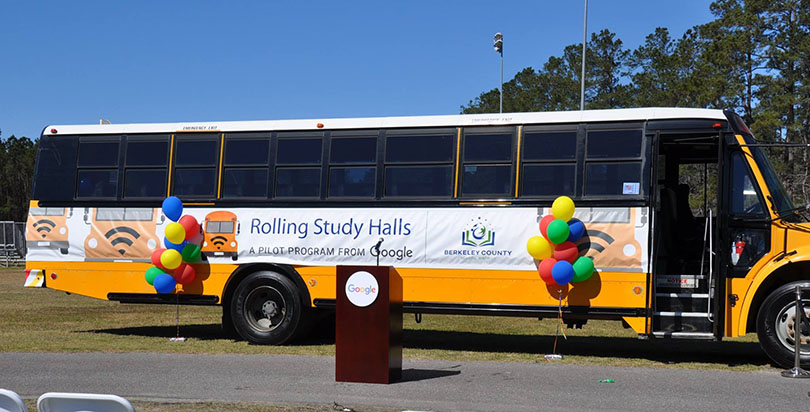 This article is one in a series at The 74 that profiles the heroes, victories, success stories, and random acts of kindness to be found at schools all across America. Read more of our recent inspiring profiles at The74million.org/series/inspiring.
For some students in Berkeley County, South Carolina, going to school means a 90-minute commute each way on a yellow school bus. Now, Google is helping those kids make the best use of that time by providing free wifi and internet connections on 28 of those buses, turning each into a “Rolling Study Hall.”
“A ‘Rolling Study Hall’ is like an extended classroom,” Lilyn Hester, Google’s head of Southeast public affairs, tells Live 5 News. “It addresses the needs of students that don’t have wifi or internet access in their home.”
That description applies to many of the children in the rural towns of St. Stephen and Cross. For them, the first-in-the-state program is a wireless lifeline, providing a connection to the wider world and letting kids who don’t arrive home until late in the day get a jump on their homework.
The program is funded through a Google Community Grant that provided nearly $180,000 to equip buses that serve six Title I schools — two high schools, one middle school and three elementary schools — in the district. Then, to make sure every student could use the free wifi, Google handed out 1,700 backpacks containing Chromebooks.
Fourth-grader Trinity Barnes told  Fox News Tech that she loves her new laptop. “It makes me feel more comfortable with the lesson,” she said. “It makes me feel more confident when she [the teacher] asks me a question.”

For the district’s part, Berkeley County will make sure teachers ride the buses with the kids to help them get the most out of their internet access.

Rolling Study Halls aren’t entirely new in the United States. California’s Coachella Valley Unified School District launched the first wifi-enabled school buses in late 2014, and Google kicked off its program last year in Caldwell County, North Carolina.
But Berkeley County’s 28 buses are serving as a pilot project of sorts for Google, one that is already helping students stay on track.
One seventh-grader tells Live 5 News that bus time has turned into important study time. Using the bus ride to focus on school, she said, frees her up to care for her siblings when she gets home.
Submit a Letter to the Editor
May 2, 2017