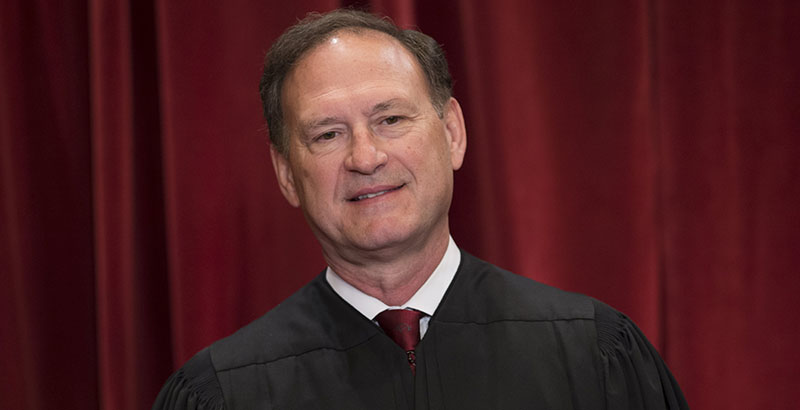 The Supreme Court’s five conservative justices delivered a powerful blow to public-sector unions Wednesday in the Janus v. AFSCME case, ending the practice of agency fees and depriving labor of a major financial pillar of its organizing activities.

Writing for the majority, Justice Samuel Alito, who has invited legal challenges like Janus in previous cases, crafted a far-reaching opinion that confirmed union backers’ worst fears: More than simply striking down agency fees, the court determined that workers must take the affirmative step of opting into union membership, rather than opting out.

In doing so, they overruled the precedent set in in 1977’s Abood v. Detroit Board of Education. In that case, the court found that while unions could not compel nonmembers to contribute funds for the purpose of political organizing — ruled to be an unconstitutional form of compelled speech — they could collect fees to support the cost of collective bargaining.

This distinction was meant to curb the problem of “free riders,” nonmembers who reap the benefits of a powerful union bargaining on their behalf but don’t contribute with dues. Agency fees have become a critical source of financing as both private and public union membership have declined, standing in for a significant proportion of lost dues.

Analysis: NEA Membership Declined in 27 States, and One Where It Grew — NY — Is Anything but Typical

The Janus ruling will cast a particularly long shadow over the education debate, in which teachers unions — the largest in the country — are a dominant player. Cut off from untold millions of dollars in funding, and faced with the new opt-in burden of recruiting new members, unions will have to work twice as hard to maintain their considerable influence over policy questions like education funding, private school choice, and standards and accountability.

Alito attacked the Abood framework by vitiating its aims, among which was the cause of “labor peace.” The court in 1977 asserted that without the ability to extract agency fees, unions could hardly act as a singular, effective advocate for employees in a workplace. Multiple forces would spring up within firms, claiming to represent workers and attempting to strike separate labor agreements with management. Chaos would be the result, the justices predicted.

But Alito argued that the past 41 years have proven that worry unfounded. Unions representing federal employees, such as at the U.S. Post Office, are not allowed to collect fees from nonmembers, but their membership still numbers in the millions and brooks no competition. Similarly, unions in the 28 so-called right-to-work states, which already ban agency fees, effectively advocate for the interests of members and nonmembers alike.

“The Abood court assumed that designation of a union as the exclusive representative of all the employees in a unit and the exaction of agency fees are inextricably linked, but that is simply not true,” Alito wrote.

The Problem of Free Riders

Next, Alito turned to the problem of free riders, who shirk paying dues but can still count on unions to bargain for them and represent them in grievance hearings. Without being able to compel some form of payment, union backers say, bargaining units will be unwilling or unable to advance nonmembers’ interests — and it would be unfair to ask them to.

Alito rejected that reasoning, arguing that the representation of all workers in a given shop is the responsibility assumed by a union when its members vote it into existence.

Unions are obliged to fulfill that responsibility whether or not they are rewarded for it by nonmembers like plaintiff Mark Janus, he wrote, and the privileges they gain from being the sole designated force arguing on behalf of labor — most importantly, a seat at the table in negotiations with management — “greatly outweigh any extra burden imposed by the duty of providing fair representation for nonmembers.”

Interestingly, Alito did leave open the possibility of a kind of fee-for-service model, with unions imposing a specific charge on nonmembers for specific duties, like representing them in grievance hearings.

“Individual nonmembers could be required to pay for that service or could be denied union representation altogether,” he wrote. “Thus, agency fees cannot be sustained on the ground that unions would otherwise be unwilling to represent nonmembers.”

The meat of Alito’s opinion came in his arguments around free speech. Previously, the court distinguished between speech related to matters of private concern (e.g., the fashion choices of a colleague), which the state as an employer can reasonably restrict, and speech related to public concern (e.g., how a public employer impacts the welfare of the public at large), which it cannot.

Agency fees, he wrote, represent a form of compelled speech of public concern: No, they don’t support a political cause or candidate, but the very act of collective bargaining against a governmental employer necessarily involves the public interest. In its negotiations with the state of Illinois, where Mark Janus works, AFSCME advances arguments about public finance, debt, and taxation that may conflict with the deeply held views of those who are compelled to pay agency fees.

Given the unique influence of teachers unions in the public sector, Alito observed, mandatory support for bargaining is like a compelled statement on particular questions of education policy. He enumerated a long list of such questions:

“Should teacher pay be based on seniority, the better to retain experienced teachers? Or should schools adopt merit pay systems to encourage teachers to get the best results out of their students? Should districts transfer more experienced teachers to the lower-performing schools that may have the greatest need for their skills, or should those teachers be allowed to stay where they have put down roots? Should teachers be given tenure protection and, if so, under what conditions? On what grounds and pursuant to what procedures should teachers be subject to discipline or dismissal? How should teacher performance and student progress be measured — by standardized tests or other means?”

In short, he concluded, the government cannot restrict or compel speech on these types of issues.

Ultimately, Alito delivered a full repudiation of Abood, writing that any payment toward a union — whether in the form of agency fees or, presumably, dues — violates the First Amendment unless the employee clearly agrees to it.

“By agreeing to pay, nonmembers are waiving their First Amendment rights, and such a waiver cannot be presumed,” he wrote. “Rather, to be effective, the waiver must be freely given and shown by ‘clear and compelling’ evidence. Unless employees clearly and affirmatively consent before any money is taken from them, this standard cannot be met.”

This requirement of “affirmative consent” will clearly pose an obstacle to labor unions seeking to build membership and fill their coffers. Now, many maintain an opt-out policy that assumes a default position of union membership and requires nonmembers to take the extra step of declaring their unwillingness to join. From now on, the reverse will be true — they will have to directly solicit, and gain, agreements to join their organizations.