Analysis: NEA Membership Declined in 27 States, and One Where It Grew — NY — Is Anything but Typical

The National Education Association had 2,963,540 members in 2016, of whom 87.5 percent were working in the public school system. This was an increase of 0.5 percent from 2015 and the first increase in total membership since 2009.

This is good news for the union after such a long drought and will be celebrated at the annual NEA Representative Assembly in Boston early next month. A closer look at the state-by-state figures reveals that NEA isn’t out of the woods, however, and may soon find itself divided between the haves and have-nots.

I have compiled the numbers, reported in the NEA Secretary-Treasurer/Independent Auditors 2017 Financial Reports, in a handy table, which provides both the total and active membership for each state affiliate. Active members are employed teachers, professionals, and education support workers. Total membership includes retirees, students, substitutes, and all others. Along with the numbers are the one-year and five-year changes in those figures. 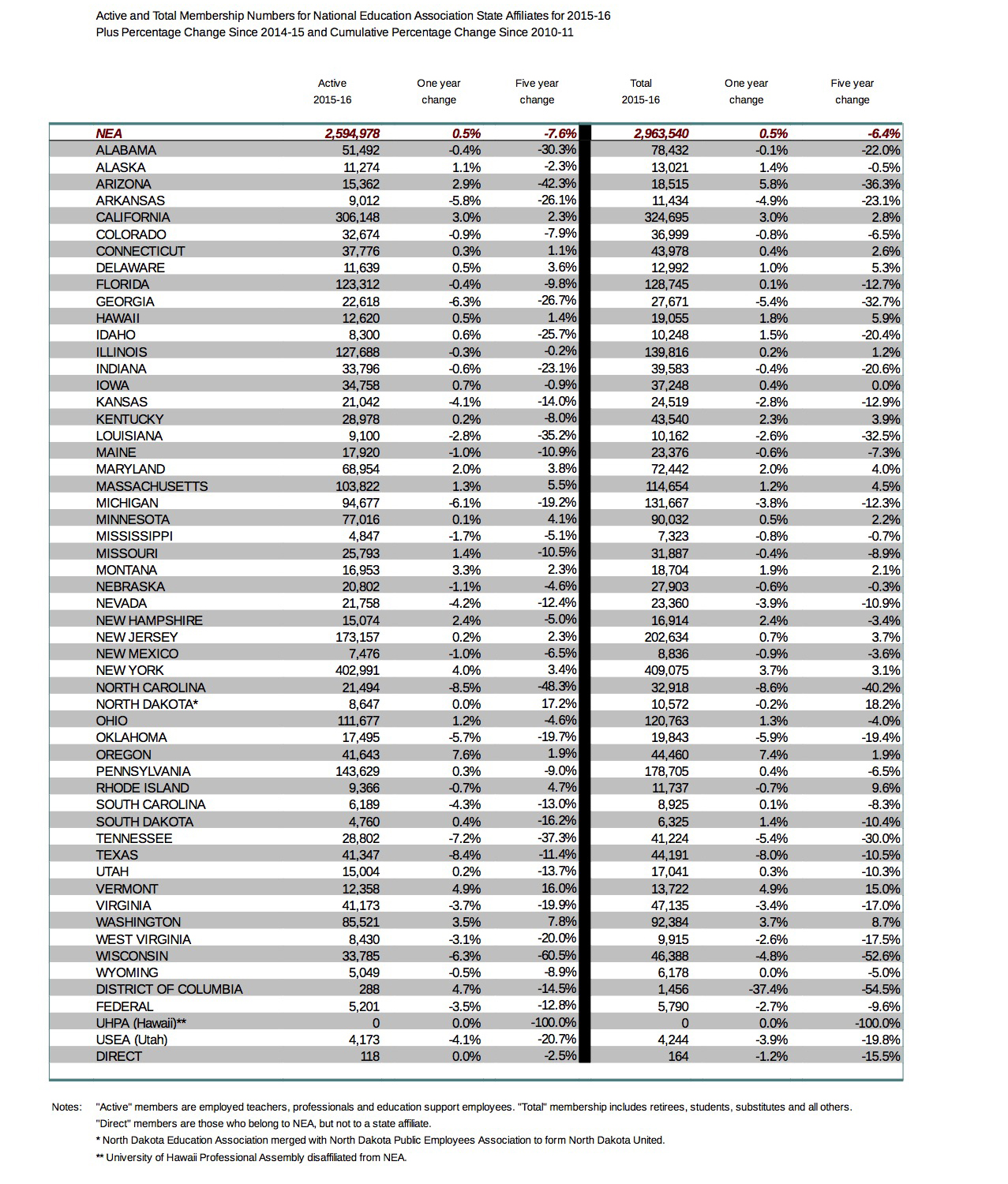 The raw numbers show that NEA had an increase of almost 16,000 members, but more than 4,000 of those were retirees, who pay the national union $30 a year. Certainly they are welcome additions, loyal to the organization after their working days have ended, but they are still folks who were formerly paying $187 a year as active members.

And there’s a small problem concerning the 11,862 new active members. A look at the state figures shows that by itself New York State United Teachers accounted for 15,584 new active members. That means all the NEA’s other affiliates produced a net loss of more than 3,700 members.

This is significant because NYSUT is by no means a normal NEA state affiliate. The 400,000-member New York state teachers group is primarily affiliated with the American Federation of Teachers. In 2006, NYSUT merged with — absorbed might be a better word — a struggling NEA New York, which had fewer than 41,000 members at the time. NYSUT members have reduced voting and representation rights at NEA, and do not pay a full complement of NEA national dues.

It’s difficult to find happy news for NEA elsewhere in the nation. State affiliates in Arkansas, Georgia, Michigan, North Carolina, Oklahoma, Tennessee, Texas, and Wisconsin all lost more than 5 percent of their active members in a single year. Affiliates in Kansas, Nevada, South Carolina, and the Utah School Employees Association also had a miserable year.

I reported last month that NEA is budgeting for a loss of 20,000 members in 2017–18. If the case of Janus v. AFSCME challenging agency fees goes to the U.S. Supreme Court and is decided against the unions, 2016 might end up being NEA’s last high-water mark.