FIRST Robotics: How an Afterschool STEM Program That’s Grown to Inspire More Than 530,000 Students a Year Is Now Being Used to Shape Curriculum in the Classroom 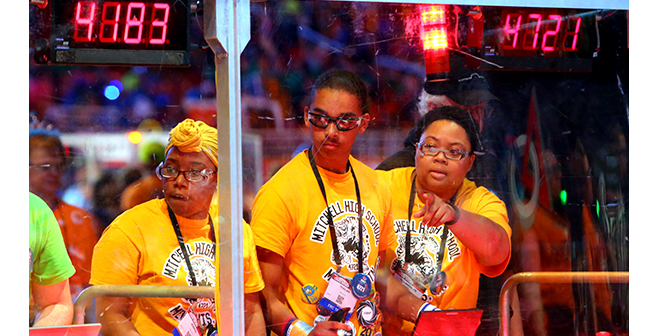 When FIRST originally launched 30 years ago as an afterschool robotics activity for high schoolers, the STEM movement was a nascent affair and such concepts as “makerspaces” and “hands-on experiential learning” had yet to take root. But as these movements found traction, FIRST has been there to add even more wind to the sails, using focused short-term robotics competitions and electrifying national championships to capture both the imaginations of K-12 students and the interests of instructors.

Fast forward a couple of decades, and the growth of FIRST (For Inspiration and Recognition of Science and Technology) shows no signs of slowing down, as one annual world championship has now expanded into two, playing out in different cities on different weekends to attract the world’s top STEM students. The sheer statistics are staggering: From 61,000 teams across 85 countries, more than 530,000 students commit to the two-month endeavor, building 120-pound robots that can complete an array of core tasks.

This past spring, FIRST welcomed 70,000 attendees to the top showdowns in Houston and Detroit, inside the two cities’ major stadiums. Don Bossi, FIRST’s president, tells The 74 that while the championships still represent the pinnacle of earned achievement in the competition, they also expose “as many kids as possible to the excitement and impact — and drive home a message that they are part of a movement and community that can make the world a better place.”

FIRST can bring schoolyard glory to the winners, but you’ll find most FIRST teams meeting outside of conventional school hours, typically preparing for afterschool competitions. That said, two-thirds of FIRST teams in the United States are linked to their schools, often with teachers as coaches and local industry professionals as mentors.

This connection between competitors and teachers builds a natural bridge between FIRST skills and the classroom curriculum.

“As teachers get involved in this out of school, they start to realize the impact that could be had in pulling this into the classroom,” Bossi says. “We have seen quite a few teacher-mentors invent their own curriculum, so more and more we are working to help support them by offering pre-curriculum around our programs.”

FIRST officials say the organization is now aiming to strengthen this bridge to the classroom through a simplified robotics experience for classroom teachers.

One notable instance of FIRST inspiring classroom activities comes from Michigan’s Ypsilanti STEMM Middle College High School, a five-year blended institution that combines three to four years onsite at the high school campus with one to two years at Washtenaw Community College, all with a focus on STEMM (the second M stands for manufacturing). The broader concept for the school, which opened in 2013, was born out of its FIRST robotics team, the school says. “It is the most compelling data I’ve seen on the impacts of pulling [hands-on STEM] concepts into the classroom,” Bossi says.

Beyond STEM coursework, though, FIRST organizers say they see their mission as something broader: inspiring a lifelong love of learning, which will surely prove critical in today’s ever-evolving workforce. The robots, and the core STEM concepts, they say, are merely the competitive hook to entice students to think more critically about how to improve the world around them.

FIRST has four age-specific programs. Its Lego League Jr. is for students in kindergarten through fourth grade. Lego League is for kids in fourth through eighth grades. Its Tech Challenge is for grades seven through 12. Each of these three programs runs concurrent to the school year, allowing students to work on robotics challenges along the way.

The fourth program, FIRST Robotics Competition, is focused primarily on high school students and serves as the capstone FIRST project. This challenge includes a timed element that has teams practicing their skills in the fall and then getting a challenge to solve early in the calendar year. Teams have six weeks to design and build before entering the competition phase that includes tight rules on when students can work on the project.

Despite how far it’s come, FIRST organizers say the program still has plenty of room to grow. FIRST has reached only 11 percent of U.S. schools, accounting for 17.5 percent of U.S. students. “How do we grow this so it is available and accessible to every kid everywhere, particularly kids from underserved backgrounds or communities where scientists or engineers are not the first career path people talk about when a kid is young?” Bossi asks.

“How do we expand, so more kids have access to participate, and do that with a very strong eye toward equity, diversity, and inclusion? There is no question the STEM workforce is still dominated by white males. So, literally, how do we change the face of STEM?”

Bossi says he’s been inspired by the recent gains that have been made. An equity program launched in 2016 now bestows 15 communities an average of $25,000 to facilitate the program on an annual basis. As of this year, 31 percent of FIRST participants are female, and 33 percent of female FIRST alumni go on to major in engineering. More Hispanic and African-American students are now participating than ever before.

Even more impressive, though, may be the numbers that point to rising student engagement — and confidence — among FIRST participants. In a recent survey, 84 percent of high-school-age FIRST competitors report they are now more motivated to take more advanced math and science classes.