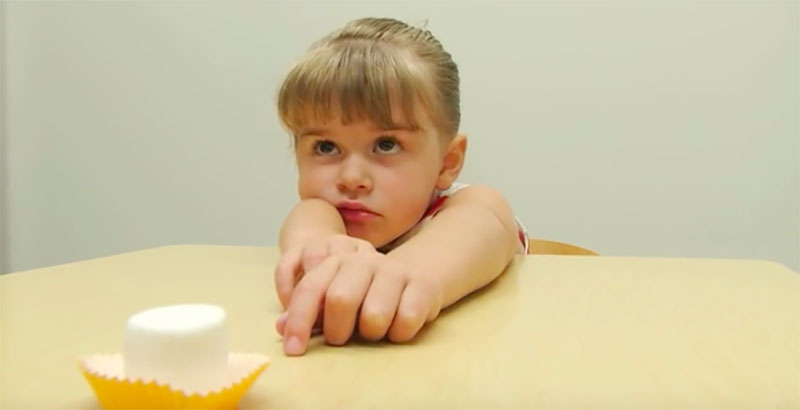 The folks who brought us the marshmallow test have some unlikely news: Children today have more self-control than ever.

That conclusion is based on more than 50 years of results from the iconic test, which allows a preschooler to eat one treat immediately or two if she can wait 10 minutes. The effort at delayed gratification is vastly funny, but the results were found to have serious implications for children’s future success.

Led by psychologist Walter Mischel, who created the experiment — one of the most famous in developmental psychology — a research team found that children tested between 2002 and 2012 held out for two minutes longer on average than the original test-takers in the 1960s, and one minute longer than participants in the 1980s.

“In other words, children in the earlier cohorts performed at the same level as children who were as much as a full year younger in the later cohort,” the authors wrote in a paper published in late June.

A survey conducted by the researchers predicted far different results: 75 percent of adults said they thought children today have less self-control than children a half-century ago and believed they themselves would have waited “significantly” longer as 4-year-olds than would their own children.

“Adults’ expectations of kids tend to be pretty unrealistic, especially when it comes to self-control,” University of Minnesota professor Stephanie Carlson told The 74. Carlson co-authored the report.

It’s not clear why the current generation is better at delaying rewards, but Carlson says it may be due in part to a greater ability to think in the abstract — part of a broader rise in intelligence, as measured by IQ scores, during the last century (sometimes called the Flynn effect — although more recent research shows IQs may now be trending downward).

Advances in computing may help in unexpected ways.

“Increased reliance on digital technology is not necessarily the forebearer of stunted development,” the authors wrote, perhaps to the surprise of the world’s parents, who in very unscientific polling believe that phones allow young people to immediately gratify most needs during the 17 or so hours a day they use them.

“Apps might make it harder for some children to remain focused on less immediately rewarding tasks like homework, yet, ironically, the abstract thought and attention-control skills those devices are exercising could make it easier for them to delay gratification … when they are motivated to do so,” the study continued.

Carlson and her colleagues posit that an increasing focus by parents and schools on qualities associated with executive function — remembering information, practicing impulse control, and regulating attention — and expanded and professionalized pre-K have contributed to the stronger delay skills.

In a series of studies tracking the original marshmallow test participants into adulthood, Mischel and his colleagues determined that a 4½-year-old’s ability to resist temptation while sitting alone in a room with a puffy treat was associated with a wealth of favorable outcomes later in life, including higher SAT scores, healthier weight, more confidence, and better relationships.

But the lessons of marshmallow tests are limited by the fact that most of those tested were white children of families affiliated with the universities where the research took place. The examinations administered during the 1960s at Stanford and the 1980s at Barnard College were of “primarily Caucasian” children, according to the new study, with white children comprising 88.2 percent of the most recent ones conducted in the 2000s.

A large literature has emerged in recent years finding that poor children, including large black and Hispanic populations in cities, are more likely to struggle with executive function skills and, later, academic tasks.

The Mischel/Carlson paper acknowledges the point. Carlson said there are “really reliable” indicators showing that “children in low-income homes perform worse on measurements of executive function, including delayed gratification. Even with high-income kids, if you come back with low trust — kids wait less than one second. If you’re not really sure where your next meal is coming from, does it make sense to wait?”

Social scientists at the University of Rochester asked the same question six years ago. In a study that could have been designed by Lemony Snicket, they divided a small cohort of 28 children into reliable and unreliable “conditions”: before getting the marshmallow test, youngsters in the unreliable condition were promised better art supplies and then better stickers if they waited without using the inferior samples they’d been given.

Both times the unreliable tester returned without the promised items.

“The more data, the more you influence their expectations,” said Celeste Kidd, who directed the experiment and does not seem evil, in an interview. “If there’s just one instance, it could be a fluke. Doing it twice was trying to strengthen their expectations that things promised don’t always happen.”

Gratification delay isn’t only a measure of self-control, the researchers concluded in a paper they titled “Rational Snacking.”

“Wait-times on sustained delay-of-gratification tasks (e.g., the marshmallow task) may not only reflect differences in self-control abilities,” they wrote, “but also beliefs about the stability of the world.”

In an effort to identify more precisely what the marshmallow test measures, Tyler Watts, a researcher at NYU, and two colleagues from the University of California, Irvine, recently tried to replicate Mischel’s long-term findings with data from an unrelated federal day care study that began in the 1980s. It included a marshmallow test and followed participants through the age of 15.

The day care study started tracking children when they were still in utero, yielding Watts and his colleagues much richer background information than was available for the preschoolers Mischel studied. Watts was able to statistically re-run the marshmallow results controlling for race, income, birth weight, and other variables that predict future performance, as well as for scores on cognitive, behavioral, and environmental assessments taken at the time of the test.

The findings, published last month in Psychological Science, surprised the team: There was a small correlation between delay on the day care marshmallow test and future academic achievement — but only for children whose mothers didn’t attend college — and no correlation at all with future behavior. Statistical limitations prevented the authors from being able to say whether the relationship between being able to wait on the marshmallow test and subsequent achievement varied depending on whether a child is poor or not.

The results fell far short of the effect sizes Mischel and others have found, prompting some to suggest that Mischel, whose huge influence has led to profiles in The New Yorker and TED Talks, had fallen victim to the “replication crisis.” The crisis refers to the inability of social and hard scientists to recreate large numbers of experiments in published papers.

That seems an exaggeration. Watts’s data are suggestive but not inconsistent with Mischel’s; Mischel’s new paper notes that marshmallow results are limited by examining “only a small and specific subpopulation.”

Watts says the takeaway from his study should be that interventions focusing on self-control may be less helpful than some think. “Should we be able to teach kids gratification delay from an early age? It probably shouldn’t be at the top of the list.

Carlson, the University of Minnesota child development expert who studies what she calls “the executive achievement gap, which is a prelude to the achievement gap,” remains more optimistic.

Children can learn to manipulate their mindset, she says, citing the Batman effect, which refers to a child’s improved executive function skills when dressed like a superhero. “It’s about conjuring up strategies. The idea is, if you can help kids just once or two times or three times [with] what it feels like to have better self-control, and therefore reach your goal, it become easier and easier.

“You’re actually training these neural networks how to do this. With children in poverty, a lot of this is practice.”