When David Rada, a social worker, decided he wanted to switch careers, he turned to computer coding classes on the internet.

“I was working 40 hours a week and studying online 10 or 15 hours a week for four or five months,” Rada said. “But you can only go so far on your own. I figured the next step for me was to get in a program with an instructor.”

Rada, 30, looked into coding boot camps, which promise to take students with little or no background and turn them into software engineers in as few as 12 weeks. But the cost of stopping work for months of full-time, intense training while also paying tuition — an average of $12,000 — was prohibitive.

Then, in January, he saw an announcement on the website of General Assembly, one of the leaders in boot-camp-style education. The school would be opening a site in Stamford, Connecticut, in March, and tuition would be free for state residents.

Rada, who lives in nearby Westport, couldn’t believe his luck.

It turned out he was in the right state at the right time.

Connecticut had recently been hit with a double whammy that suddenly made state funding for technical education start flowing like water. In 2016, General Electric left its home in Fairfield after 42 years, blaming in part a lack of high-tech talent for its move to Boston. The next year, two defense contractors — Pratt & Whitney and General Dynamics Electric Boat — put the state on notice that without more skilled labor, their businesses would be in trouble.

The state had to quickly address an estimated 7,000 unfilled high-tech computer jobs and 12,000 openings in advanced manufacturing.

Connecticut is not alone in having a shortage of skilled workers. Statistics released by the U.S. Department of Labor on April 9 show that there were 477,000 unfilled manufacturing jobs nationwide at the end of February. There are no equivalent statistics for coders, who can work across industries from hospitals to retail to design. But the App Association, which represents 5,000 app and information technology companies nationwide, estimates there are 223,000 open jobs for software developers.

“We have an immediate crisis,” said Eric Brown, vice president of manufacturing policy and outreach at the Connecticut Business and Industry Association. “The need is everywhere, from entry-level workers with basic training to the need for engineers and everything in between.” 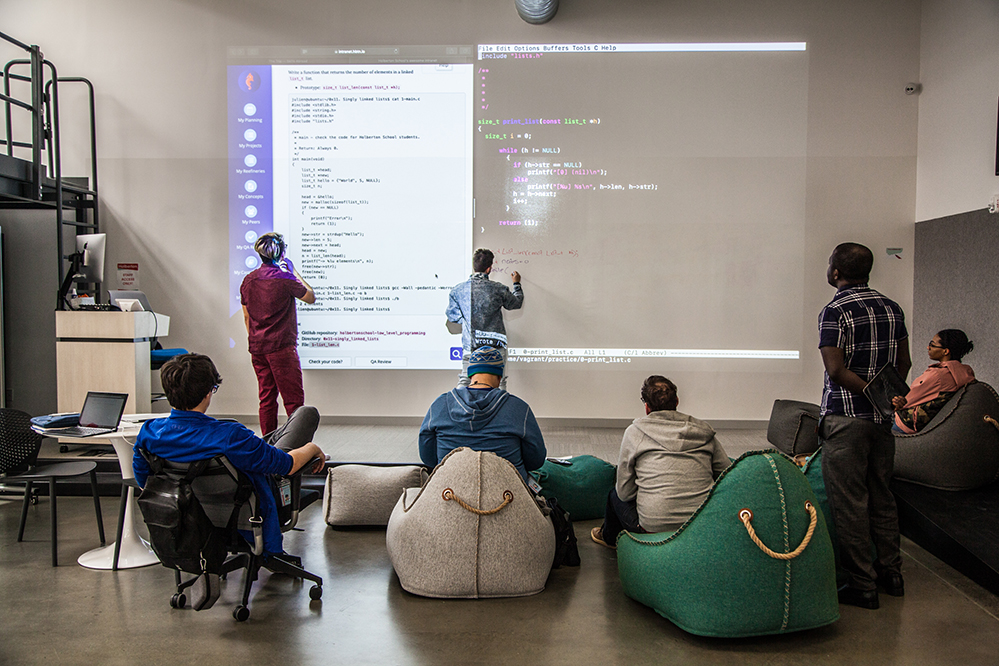 General Assembly was one of two coding boot camps that the state awarded a total of $2.5 million in December to provide tuition-free software engineering and data analysis to 400 students over two years. The other, Tech Talent South, opened in Hartford at the end of April. Through various workforce initiatives, the state has also awarded $1.8 million to the Holberton school, a two-year program that launched in New Haven in January. Holberton trains students to be full-stack engineers, fluent in all aspects of software development, while the boot camps teach more narrowly targeted skills.

But those investments are dwarfed by the $50 million the state Legislature approved in 2018 for programs that will train workers in high-tech skills needed by the major defense contractors and manufacturers and the more than 4,000 small suppliers that call Connecticut home. Only $5 million has been allocated so far, Brown said.

Michael Kozlowski, executive director for manufacturing at Connecticut State Colleges and Universities, said the state is seeking to prepare an additional 30,000 trained workers in the next 15 years, as the “silver tsunami” of retirement hits manufacturing.

The goal is to shorten the training, lower the cost and create partnerships with industry to guide students right into careers. Public-private career training pipelines are emerging throughout the state, while eight community colleges now offer traditional skills, from blueprint reading to welding or pipe fitting, in six-week courses and more sophisticated 10-month programs in 3-D printing and computerized machine-making. The longer program is subsidized by the state. While it costs Connecticut an average of $14,000 per student to run the program, students are charged about $7,000 in tuition. With grants, many students pay only $1,000 for the course, Kozlowski said.

But pay may not be enough of a lure to draw students into manufacturing careers rather than college.

“There’s a huge challenge getting the attention of students, teachers, guidance counselors and, most of all, parents,” Brown, of the business group, said. “We are trying to change the high school evaluation process so that technical education, not just a two- or four-year college, will be considered a successful outcome.”

At the other end of the spectrum, software engineering schools are having no trouble finding students who want to avoid four years of college and the debt it often brings.

The state’s high-tech worker shortage includes 2,500 software engineers and 600 entry-level jobs, said Nadine Krause, executive director of New Haven’s Holberton school. In all, there are only 450 computer science graduates a year from traditional colleges in Connecticut, she said. Not all of those graduates will stay in the state, or even in the computer science field. Of those who do, many won’t have the soft skills — communication, work ethic, time management, cooperation — necessary to succeed in the work world. Krause estimates there are only 60 or 70 new work-ready computer graduates in Connecticut each year. 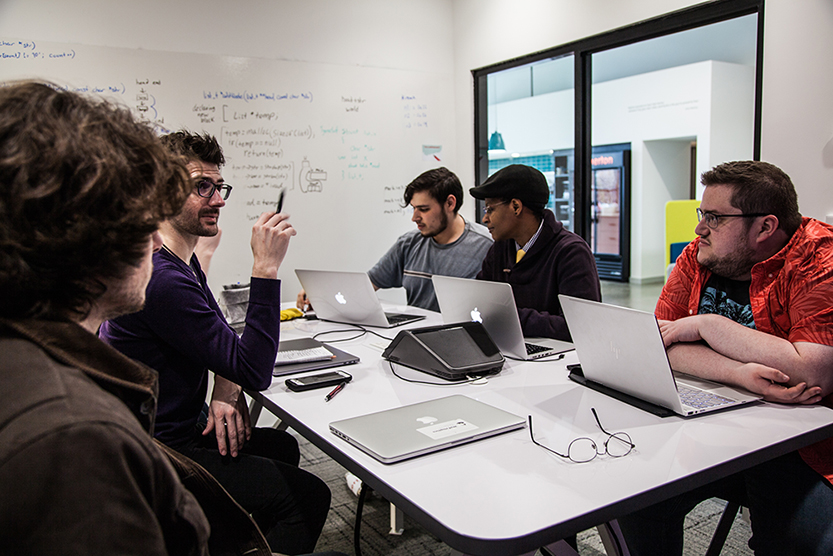 Holberton students camp out in conference rooms named for inspiring figures like Billie Jean King and Frida Kahlo, where they consult with one another and their mentors. Holberton has no teachers. (Tina Sommers)

Holberton, housed in a renovated bus depot turned shared workspace and incubator called District, aims to double the number of able graduates. The school, whose curriculum was developed in San Francisco and has been replicated in Bogotá, Colombia, does not charge tuition up front. There’s not even an application fee. Instead, it works on an income-share agreement in which students pledge to pay 17 percent of their salary for three and a half years whether they make $40,000 or $145,000. The maximum repayment is $85,000, Krause said.

“This allows people to go into different fields,” she said. “They don’t have to be motivated by money. They can work in nonprofits if that’s what inspires them.”

On a recent Thursday morning, a dozen or so Holberton students were scattered throughout the sprawling 8,000-square-foot space. It was not one of the school’s mandatory on-site days, but those who were there worked in small groups. Some camped out in conference rooms named for inspiring figures like Billie Jean King and Frida Kahlo, others sat at tables that double as whiteboards, but most chatted in a gleaming kitchen area, comparing notes. No one had pulled an all-nighter, so The Cube, a darkened, soundproof room where students can curl up on felt cushions when they need a break, was empty.

Holberton has no teachers. The curriculum is project-based, and students consult with one another or reach out to their mentors for help when they run into a challenge, just as employees of a business would.

The school’s first cohort of 28 students started in January. The next group began in June, and a third will start in the fall. Like Tech Talent South and General Assembly, Holberton aims to address the lack of diversity in the tech world. Its first group is 20 percent female and 68 percent people of color. The application process is blind, so Holberton officials didn’t know what the makeup of the next class would be.

Ellen Last, community organizer for Tech Talent South in Hartford, which opened at the end of April, said the school looks to train more women to become software engineers. The company’s headquarters are in Charlotte, North Carolina, and it has opened schools across the South.

The school chooses a language to teach after studying what skills are needed in the city in which it launches. In Hartford, it’s Java, a computer language often used in established industries, like insurance. (In more startup-heavy communities, the program stresses a newer computer language, Ruby on Rails.)

“We are the first program of this kind to come to Hartford,” Last said. “The mission of Tech Talent South is to come to communities that didn’t have resources like this. The idea is ‘There is talent here, let’s get our local talent the skills they need for the evolving landscape.’”

“We’re a pretty easy school to hook up,” Mickey Slevin, General Assembly’s regional director, said. “All we need is a computer connection, a screen and some whiteboards.”

Students come from around the state to attend class from 8:45 a.m. to 5 p.m. Monday to Friday. With homework averaging 20 hours a week, some find it easier to stay in a nearby hotel during the week.

The classroom sessions are geared to adult learners since most of the students are career changers. On a recent day, 12 men and four women, almost all in jeans and sweatshirts, focused intently on their computer screens. Later, they would pair off to work on projects together.

General Assembly is developing partnerships with local businesses and will try to match students with employers in Connecticut, Slevin said, but students are not required to work in the state in order to get free tuition.

Connecticut isn’t the only state that pays General Assembly students’ tuition. The school, which has two dozen campuses worldwide, has a similar free-tuition agreement with Rhode Island and gets federal and municipal funding for workforce development programs for underrepresented minorities in various other locations.

Donovan Taitt, a lead instructor at General Assembly, was first introduced to software engineering through a federally funded social-impact program, Per Scholas, in Brooklyn. He got the basics in a six-week training; then he was accepted to General Assembly. After learning web development, he took a job working on the website of Neiman Marcus in Dallas.

“I decided to come back because it’s a good community,” Taitt said. “Also, I missed home.”

Taitt said he was grateful to have the chance to develop the skills that make such wide-ranging job choices possible — without the financial hardship of college tuition.

“We not only teach tech skills, but just being in the space, being in the community, makes you realize what’s possible,” he said.

After just a few weeks in the program, Rada, the former social worker, seemed to agree with that assessment.

“At the beginning what was motivating me was just getting a better career,” Rada said. “But now that I’m here, it’s become more interesting. All I think about is coding right now.”

Lead image: Donovan Taitt went through General Assembly’s coding boot camp and then returned to the program as a lead instructor at its Stamford, Connecticut, site. (Debra West)