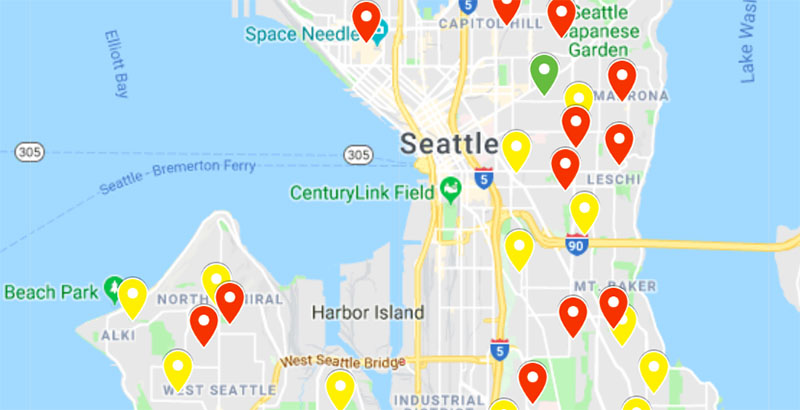 Over the past two years, The 74 has published a special series of maps compiled by Max Eden, all looking at the critical information contained in school climate surveys and mapping out responses to those surveys in New York City, Los Angeles and Philadelphia. (Click on the city names to see the maps, and read more about what Eden says he learned in surveying the safety data.) In this latest installment, Eden looks at school safety in Seattle based on surveys of students. NYC, L.A., Philly, and Seattle are among only a small number of major districts that conduct the surveys and make their results public. In a separate essay, Eden argues that all districts should do the same.

To discipline-reform advocates, this is great news. But no one stopped to see what Seattle’s students thought about what was happening in their schools as suspensions were dramatically curtailed. Unfortunately, as fits a national pattern, Seattle students say that most of the 102 schools in the district have become less safe, less respectful, and less supportive places to learn.

So long as the district was being pressured by the government to press forward with discipline reform or potentially lose federal funding, student voices mattered little. But now that the 2014 Dear Colleague Letter on school discipline has been rescinded — and that threat has been lifted — there is finally an opportunity for the voices of students, teachers, and parents to be taken seriously.

Seattle Public Schools is one of a small number of major districts that administer an annual, consistent school climate survey, asking students a range of questions and making the results publicly available at the school level. In order to inform the parents of Seattle students — and the general public — about how school climate changed as the district aggressively lowered suspensions, I pulled answers to questions concerning safety, respect, and fairness from the first year that results are available until the latest school year (2015 to 2018). 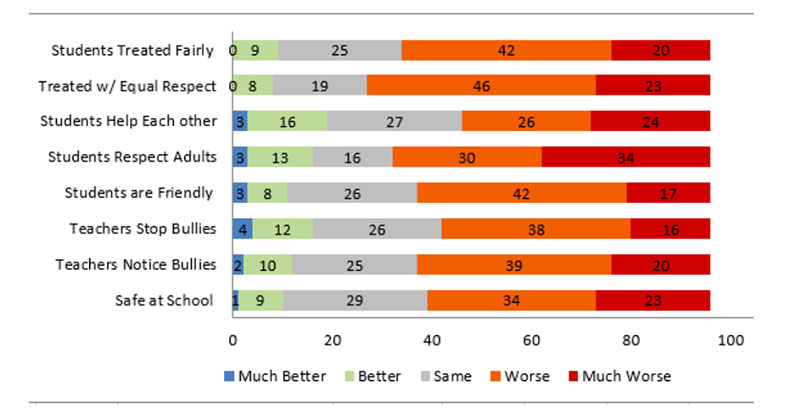 This graph covers the 96 Seattle schools for which there were data from 2015 to 2018; the numbers represent the number of schools that saw a shift of varying directions and magnitudes

Something has clearly gone very wrong in Seattle Public Schools.

My hypothesis is that this deterioration in school climate is a result of the district’s aggressive effort to lower suspensions. It fits perfectly with a pattern of harm documented by students in other districts that have implemented discipline reform, such as New York City, Los Angeles, Washoe County in Nevada, and Pittsburgh. Although the data doesn’t lend itself to an academic analysis that could provide causal certainty, it seems unlikely to be a coincidence that almost everywhere these reforms occur, we have school climate survey data showing that fewer students feel safe, respected, and supported.

But it’s no wonder that — despite having the data at their fingertips — none of these districts have reversed course on discipline reform. District administrators and school board members had strong financial and public relations incentives to lower suspensions. Because discipline reform is framed as an issue of racial justice, school leaders expect positive press coverage for decreasing suspensions. More importantly, school districts, like Seattle, under investigation by the federal government risked losing federal funding and could find relief from that threat only by fully embracing the Obama administration’s preferred policies.

The fact that the feds are no longer pressuring Seattle Public Schools to press forward on discipline reform is a necessary but radically insufficient condition for meaningful change. Social justice activist groups will continue to ignore school climate data, point to suspension data, and declare that “the district, as an institution, does not care about students of color.”

Students — especially students of color — have been telling the community that they’re feeling less safe. But their voices have been effectively silenced by social justice activists and self-interested education bureaucrats who show no signs of reconsidering their policy position in light of mounting evidence of harm.

The only way that children’s voices can be heard is if their parents speak up on their behalf. Seattle parents must examine their school’s climate data, and if the students are saying they feel less safe, talk to the teachers to figure out why. If teachers tell them their hands have been tied by these new policies and that they’re less able to maintain order and safety, then parents must press the school board to repeal them.