Analysis: From Teacher Pay to Free College, What 41 Governors’ State of the State Addresses Reveal About the Nation’s Top 2020 Education Issues

Governors’ annual State of the State addresses are windows into what’s likely to be at the top of state education agendas in the coming year — and what’s not. It’s clear from this year’s speeches that school reform, a state priority for years, has fallen out of favor.

FutureEd’s analysis of the 41 gubernatorial speeches delivered so far this year found that while every state leader highlighted the importance of education, they talked a lot more about expanding educational opportunities than improving the performance of the nation’s schools and colleges.

With large-scale teacher protests in several states and some shortages of qualified teachers, no fewer than 16 governors pledged to improve teacher pay, retention and recruitment. Florida Republican Ron DeSantis and Maine Democrat Janet Mills called for setting a higher minimum salary, while Republican Bill Lee of Tennessee proposed scholarships for teacher trainees. California Democrat Gavin Newsom didn’t mention teachers in his State of the State address but has included nearly $1 billion in his new budget to recruit and retain educators. 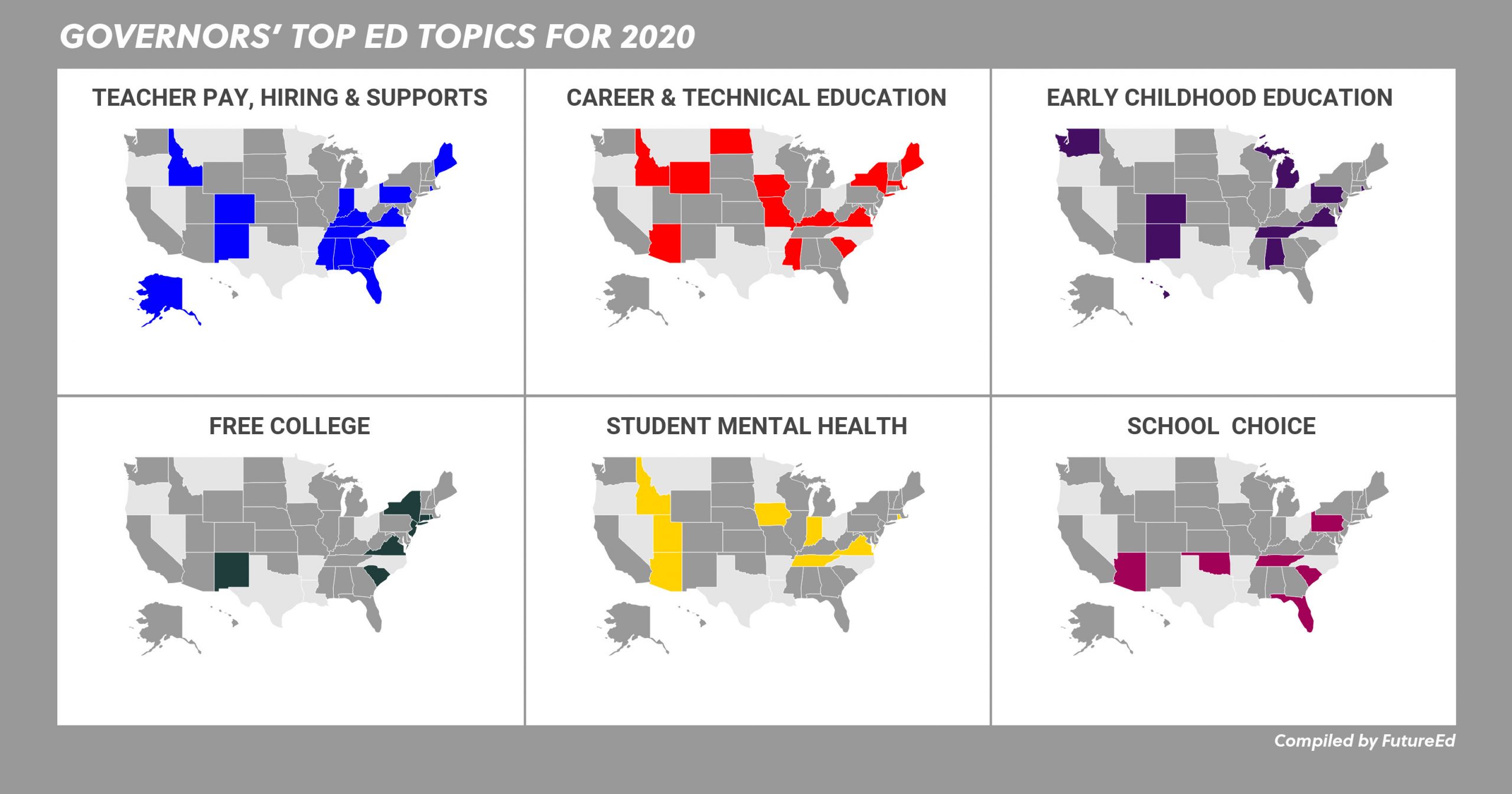 Thirteen state executives called for more career and technical education (CTE), apprenticeships or other vocational training at the high school or postsecondary level. The stigma once associated with vocational education has been replaced with an intensive focus on connecting high school students directly with employers and trades. The governors’ proposals included expanding work-based learning coordinators in Indiana, providing funding for CTE equipment in Idaho, a $15 million partnership with vocational schools to address the Massachusetts skills gap and greater collaboration among education and workforce development agencies in Wyoming.

A dozen governors from both sides of the political aisle announced plans to expand early childhood education, including a 50 percent increase in pre-K seats in Delaware and more money for at-risk 3- and 4-year-olds in Virginia. Democrat Gina Raimondo of Rhode Island called for more school mental health care workers, as one of several state leaders who proposed steps to address trauma and mental health challenges facing students, including the consequences of gun violence and rising rates of anxiety, depression and suicide. Republican Eric Holcomb of Indiana wants to ensure that every school has a relationship with a mental health provider, while Lee would set up a $250 million mental health trust fund.

While the Democratic presidential candidates have championed free college, both Democratic and Republican governors have touted the concept — including Democrat Ralph Northam of Virginia, who promised to eliminate tuition at the commonwealth’s community colleges for low- to moderate-income students pursuing degrees in high-demand fields. Republican Henry McMaster of South Carolina would offer free tuition for active-duty military and National Guard members, and Democrat Andrew Cuomo of New York would expand his state’s program for free tuition at public institutions, raising the income bar from families making up to $125,000 a year to those earning up to $150,000.

But there were scant references in the governors’ addresses to ensuring that students are taught to high standards, or to school and teacher accountability, topics that dominated state legislatures over the past two decades.

Instead, three Republican governors added their voices to recent calls to reduce standardized testing, while Pennsylvania Democrat Tom Wolf, a close ally of the state’s teachers unions, joined Bernie Sanders and other Democratic presidential contenders in pushing back against charter schools. Wolf called for regulatory changes that would cut funding for the hybrid public schools in the state. Meanwhile, Oklahoma Republican Kevin Stitt urged the expansion of his state’s private school tax-credit program.

Interactive: See Every Education Issue Prioritized by Governors in 41 State of the State Speeches — From Free College to Mental Health, Early Ed & Beyond

Only a few governors addressed the widespread spending disparities among school districts, even though a robust national economy has increased many states’ coffers. Maryland Republican Larry Hogan proposed $350 million to implement a new school funding formula designed to close the spending gaps, while Wolf pledged $100 million toward leveling the funding playing field in his state. The governors of New York, Michigan and Vermont called for fairer funding without pledging resources to achieve the goal.

Taken together, the governors’ opening 2020 pronouncements on education suggest that the era of bold measures to strengthen the nation’s education systems has passed. In the wake of federal lawmakers’ decision to have states play a larger role in education policy under the Every Student Succeeds Act, governors are embracing more cautious, less confrontational responses to the pressing need to educate the nation’s students to higher standards.

Phyllis W. Jordan is editorial director of FutureEd, an independent, nonpartisan think tank at Georgetown University’s McCourt School of Public Policy. She is the author of Attendance Playbook: Smart Solutions for Reducing Chronic Absenteeism, released by FutureEd and Attendance Works.