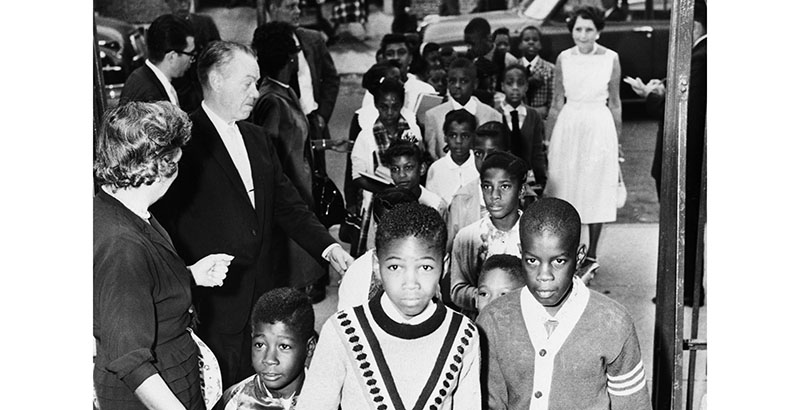 Black students enter PS 68 on Sept. 14th 1959 after they were transferred from school in the Bedford-Stuyvesant area of Brooklyn, New York. (Getty Images)

This essay is part of a special series commemorating the 65th anniversary of the landmark Brown v. Board of Education school desegregation case. Read more essays, view testimonials from the families who changed America’s schools and download the new book “Recovering Untold Stories: An Enduring Legacy of the Brown v. Board of Education Decision” at our new site: The74Million.org/Brown65.

We, as a nation, are chasing the wrong things. From Boston to Birmingham, we have seen the ferocious and virulent reaction of white people to the thought of integration. From throwing bricks at school buses full of black kids being bused into lily-white schools to entire school districts either being shut down or wholly seceding to maintain the racial imbalance, we have seen how integration is met.

Let’s stop playing the game. All black schools aren’t damaging to kids; it’s anti-blackness that is proven to be perniciously harmful to kids. As Malcolm X said, “You can’t hate the roots of a tree and not hate the tree.”

Let’s stop ignoring the fact that all-white schools have far more resources than all-black schools, which leads to a deficit in resources for millions of black children. Integration won’t fix a mindset that says it is better for the public dollars to be skewed toward white children at the expense of black children.

Let’s recognize that the false cry that integration is the only way for black kids to achieve is belied by the fact that the perspectives of white parents in the North or the South are often not all that different. Even today in 2019, many white parents’ views closely mirror those of President Dwight D. Eisenhower when he said racist white folks “…are not bad people. All they are concerned about is to see that their sweet little girls are not required to sit in school alongside some big black bucks.” He made the remark to Chief Justice Earl Warren in February 1954, not long after Warren had presided over that second round of oral arguments in Brown v. Board and before the case had been decided.

Let’s remember that it wasn’t enough to segregate schools, the government and so-called public servants and parents together made decisions that ostensibly segregated entire cities to go along with the segregated school systems.

Even when black children are admitted to all-white schools, it doesn’t mean they will be allowed to enjoy the fruits of vast resources and opportunity. These students often find themselves relegated to less rigorous courses, higher chances of being identified as special needs, more likely to be labeled miscreants, suspended, expelled, and often subjected to culturally irresponsive and irresponsible white teachers who won’t teach or treat these black students like the extremely talented human beings they are. When students don’t feel a sense of belongingness, it doesn’t lead to positive outcomes.

Today, white Americans continue to pursue segregated settings with the same settler and colonial mentality of their forefathers — violently gentrifying neighborhoods, and thus schools, and moving to suburbs to get away from people of color.

Black folks, stop chasing them. I didn’t go to an “integrated school” until I was a 16-year-old freshman at Indiana University of Pennsylvania. And once I got there, I didn’t feel like I had missed a damn thing by attending Nidhamu Sasa (a pan-African elementary school) or Overbrook High School, where there was one white student among thousands of black ones.

The black people who spout the false notion that all-black schools can’t produce positive outcomes have been duped by white supremacy and are trying to dupe people to believe there has ever been such a thing as “separate but equal.” If anything, we should be fighting to actually see what our communities can achieve when we have equitable and weighted funding systems — funding that is sustained, robust and engineered to reverse the generational oppression that black education has been subjected to in America.

The Supreme Court decision falsely declared that black kids would be permanently broken if they remained in all-black spaces. They used an oft-repeated and oft-disputed doll study to make that ruling. But this conclusion doesn’t hold up under deeper scrutiny. If majority-black schools were the impetus of anti-blackness, black students who attended all-black schools in pre-K-12 and doubled down on this environment by attending historically black colleges and universities should, by all measures, have the most damaged psyche and strongest negative racial identity. Somehow, I doubt that is the case.

Sharif El-Mekki is the principal of Mastery Charter School–Shoemaker Campus, a neighborhood public charter school in Philadelphia that serves 750 students in grades 7-12. El-Mekki founded the Fellowship – Black Male Educators for Social Justice and will launch and lead the Center for Black Educator Development in spring 2019. He blogs at Philly’s 7th Ward and is a featured voice at Education Post