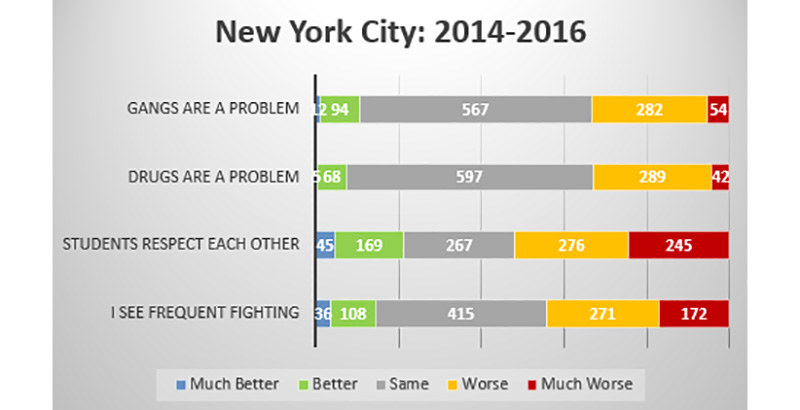 Last month, New York City Schools Chancellor Richard Carranza announced that he would soon unveil further, sweeping changes to the discipline code of the nation’s largest school district. This promises to be another big step in the wrong direction for the district’s 1.1 million students, given the data suggesting that his predecessor’s reforms to sharply curtail school suspensions have done substantial harm: from rising student perceptions of violence and disrespect, to a troubling rise in bullying, to a dramatic increase in teacher assaults, to a rise in violence and other indicators on state data, to the first killing in decades in a city school — to a local state legislator warning that students are fleeing public schools because of chaos in the classroom caused by a lack of discipline.

Given that Carranza expounds a philosophy that holds objectivity to be a key pillar of “white supremacy culture,” no amount of data is likely to shake his convictions. But hopefully other school leaders across America will take seriously the burgeoning evidence suggesting that limiting suspensions and implementing so-called restorative justice may be doing more harm than good.

The brightest evidence, which comes to us from Chicago Public Schools, is rather equivocal: One study found that decreasing the length of suspensions led to a deterioration in school climate but had no effect on academics; another study found that slightly decreasing the frequency with which students were suspended for serious misbehavior had no impact on school climate and a slightly positive impact on academics.

Philadelphia went much further than Chicago, banning suspensions for nonviolent “conduct” offenses such as using profanity or failing to obey classroom rules. Researchers found a substantial negative effect on academics: Achievement decreased by 3 percentage points in math and nearly 7 percentage points in reading after three years. And, in a perverse irony, African-American students ended up spending more time out of school on suspension because the number of suspensions for more serious offenses rose.

A not-yet-peer-reviewed doctoral dissertation examined several California school districts that banned suspensions for nonviolent “willful defiance”: Los Angeles, Oakland, San Francisco and Pasadena. It found no effects on reading but a harm to math achievement large enough to take a student from the 50th percentile to the 39th after three years.

Earlier this year, the RAND Corporation published a randomized control trial examining the effects of restorative justice in Pittsburgh as the district aggressively reduced suspensions. The results were mixed. On one hand, teachers in schools that implemented restorative justice reported an improvement in school safety, staff morale and their classroom management abilities. But students disagreed: They said their teachers’ classroom management abilities deteriorated and that students became less supportive of one another. Perhaps most alarmingly, academic achievement for African-American students decreased.

Taken as a whole, the academic literature suggests that modest efforts to reduce suspensions may be pursued with minimal effect, that aggressive efforts pose a serious risk to academics and that restorative justice may exacerbate rather than ameliorate harm.

School and system leaders should, of course, take their bearings not only from academic studies but also from the perspective of teachers. Nationwide, a majority of educators express sympathy for the idea of discipline reform. But, as I’ve documented, teachers in school districts that implemented discipline reform under pressure from federal investigations do not believe it works.

At a national level, there’s both good and bad news. The good news is that, across many categories, national education statistics do not show a significant uptick in violence or victimization. Schools today are, on average, safer than they were 10 years ago.

But the national data do show an uptick in teacher-reported disruption, which is consistent with other larger-scale surveys. A recent nationwide poll of elementary educators found that more than 70 percent believe disruptive behavior has increased over the past three years. The lead researchers suggested that disruptive behavior was “more widespread than … realized, and it may be that teachers are suffering a little bit in silence because of some of the efforts to stem discipline referrals and suspensions.”

A statewide poll sponsored by the Oregon Education Association declared a “crisis of disrupted learning” and noted that 56 percent of teachers reported experiencing at least one “room clear” in the past year. (A “room clear” is when teachers direct all children to leave the classroom for their own safety while a disruptive student throws a tantrum.)

What do students think? We have, unfortunately, very little data on this because districts rarely administer and publish school-level student survey data. Two years ago, I published a study showing an uptick in the percentage of students who reported frequent physical fighting and disrespect in New York City. Since then, I’ve searched for data in other school districts that show changes in student perceptions following a major discipline reform, and I’ve found an alarmingly consistent pattern in Philadelphia, Seattle and Washoe County, Nevada. 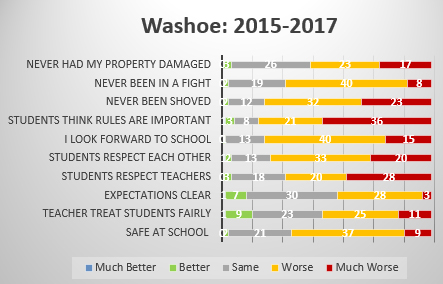 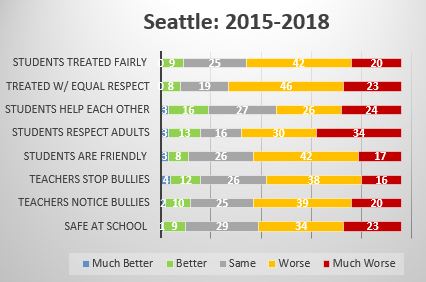 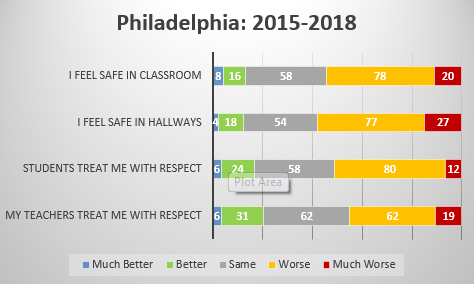 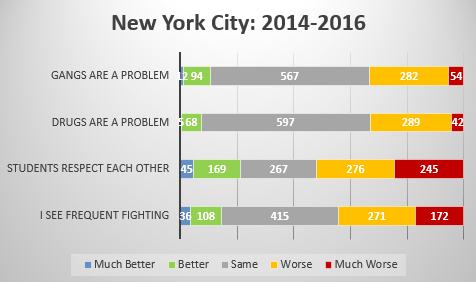 It seems unlikely that parents would look at this evidence and conclude: “This is a policy I want at my child’s school.” But many education reformers appear inclined to dismiss the data and call for school districts to push forward.

Now that the federal government has taken its thumb off the scale by rescinding an Obama-era “Dear Colleague” letter on school discipline, hopefully school leaders will re-evaluate recent policy changes, paying greater attention to students, teachers, parents and the evidence.