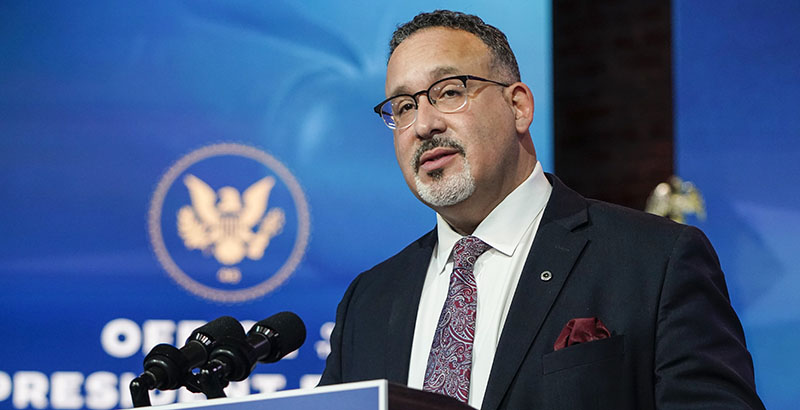 President Joe Biden’s education secretary nominee, Miguel Cardona, will hopefully open a new and positive chapter in improving America’s public education outcomes. Should the Senate confirm Cardona, it will be his responsibility to “ensure that no child’s future is determined by their zip code, parents’ income, race or disability,” as the Biden-Harris platform strikingly promised.

There is much work to do. In 2018, the Organization for Economic Co-Operation and Development gave its Program for International Student Assessment tests to 15-year-old students in 79 countries. Once a global education leader, the U.S. ranked 38th in math, 19th in science and 14th in reading, and went from first in the world for college graduation in 1995 to 16th. Former Education Secretary Arne Duncan summarized the problem in How Schools Work: “Our schools must improve, otherwise our country will continue to fall behind our worldwide peers and America’s star will fade.”

As the Biden-Harris platform urged, America needs to do more to close the achievement gap between Black and white students. Recently, Stanford University Professor Eric A. Hanushek and others concluded in well-publicized research that the overall U.S. education achievement gap has not narrowed over the last 50 years, despite much effort and hundreds of billions of dollars spent.

Our new secretary of education must break that pattern and encourage our country to do better. His success should be measured by how well America moves to change that past trajectory and embraces better ways to bring educational equity to all students.

Three U.S. cities have demonstrated substantial progress in improving public education with such new ideas. New Orleans, Miami and Washington, D.C., all allow students more choice in the schools they attend, rather than forcing them to go to low-performing neighborhood schools. All three encourage nonprofit boards to govern schools, rather than the monopolistic, political and sometimes self-serving school boards that oversee most U.S. public schools today. All support school-based decisionmaking and accountability, reducing the negative impact of central bureaucracies. And all allow schools to recruit the most effective teachers by giving proper incentives for excellence to both principals and teachers, rather than binding schools with restrictive rules.

Charter schools have been a major force in helping these cities bring about such changes. These unique public schools, and others like them, offer new hope for the future and should be both encouraged and better funded at the federal level by the new secretary. Currently, charters receive 1 percent of federal education funding while enrolling 7 percent of public school students nationally.

Although charters have brought about substantial academic improvements, including shrinking the achievement gap, they face new attacks and political pressures. The nation’s capital provides a good example of both. Today in Washington, D.C., nearly half the public school students are educated at charter schools. Before charters arrived a quarter-century ago, the District had the lowest test scores of all major cities tested. Today, D.C. ranks roughly in the middle of U.S. cities in terms of academic achievement. Stanford University studies have found that students who attend D.C. charters have dramatically outperformed their peers in D.C. Public Schools, and comparatively gained an extra 72 days in reading and an additional 101 days in math over the course of a year.

Unfortunately, public charter schools in Washington, D.C. are facing new, fierce headwinds driven by charter opponents. New rules have been imposed on charter independence, and few local politicians give charters full-throated support. Although the traditional public school system has vacant buildings, few have been offered recently to charters, which have nearly 11,000 students on waitlists and receive about $1 per student for every $3 DCPS gets in facilities funding.

In his current role as Connecticut commissioner of education, Cardona is a public charter school authorizer. If confirmed, he will be the third U.S. education secretary to have overseen charter authorization work, following Obama appointees Arne Duncan and John King.

Because of this background, Cardona surely knows that public charter schools and other education reforms have dramatically improved student performance. Charters need help to fend off attacks from those who want to maintain the status quo that has left the U.S. so far behind other nations. Cardona must push back on this and encourage what has worked best to improve student performance.

Fully utilizing the potential of public charter schools to improve public education will be vital to realizing the Biden-Harris platform’s essential educational aims.

Terry Eakin is a board member of the DC Charter School Alliance and founding board chair of DC Prep, a District of Columbia public charter school

Terry Eakin is a board member of the DC Charter School Alliance and founding board chair of DC Prep, a District of Columbia public charter school