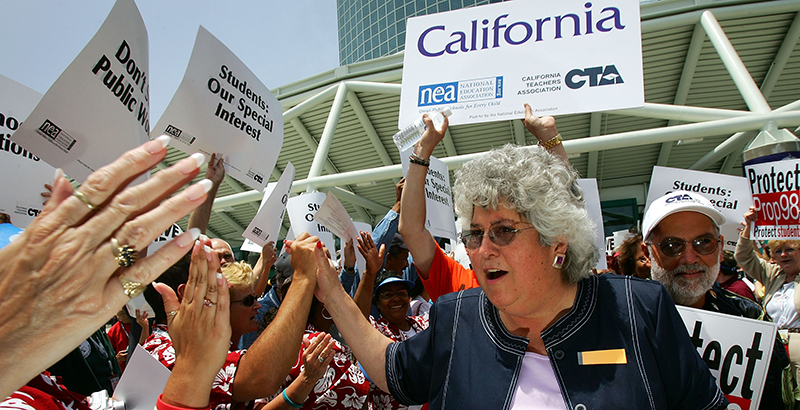 The U.S. Supreme Court’s decision last week on Janus v. AFSCME is being heralded as a landmark ruling that could cripple labor unions. But another sleeper case flying under the radar raises distinct legal issues that could have an even greater impact on the future of unions.

Bain v. California Teachers Association was first filed in 2015 by four teachers who wanted the right to belong to their local union but didn’t want their dues to be used for political causes that they don’t personally support. (Teachers in California don’t have to belong to a union, but if they do, their dues can go toward general union activities without prior approval from each individual member.)

A federal judge in Los Angeles dismissed the suit that year. The plaintiffs took the decision to a federal appeals court, where a judge tossed out Bain last month on account of them having “disassociated from their respective unions.” But attorney Josh Lipshutz has pledged to file a new suit with a different plaintiff in the future, and he vows to resurface the issues that the case challenges.

SCOTUS’s Janus decision struck down a decades-old practice of requiring non-union workers to pay union “agency fees” to cover the cost of union services, from which non-union workers may benefit. That ruling now effectively creates two sets of public employees: Union members and non-members who no longer have to pay mandatory fees. Bain, on the other hand, would create a third, and potentially larger, set of public employees — those who want to remain members but don’t want to contribute the portion of dues that funds unions’ political efforts.

A sizable portion — 35 to 40 percent — of dues goes toward political efforts, like lobbying in Sacramento and donations to political candidates, the Bain plaintiffs said. A CTA spokesperson, however, said only about 11 percent of dues fund political activities.

Even before Janus, employees who weren’t union members could opt out of paying political fees beyond the mandatory agency fees. But Bain plaintiffs argued that those who wanted to remain members of the union aren’t given the same option.

Opting out of political fees, they argued, effectively meant they were kicked out of the union and lost the many benefits that come with being a union member — including the ability to negotiate the terms of their contract, free representation during employment disputes, and better pay during maternity leave.

“Ultimately what it amounts to is coercion,” Lipshutz told The 74 last month. “Teachers know they will be punished if they don’t pay to support the union’s political position.”

While the impact of Janus will fall largely on the 22 states where agency fees had until recently been permissible — agency fees had already been outlawed in the 28 right-to-work states — the issues at the heart of Bain could apply to all 50 states.

The Janus decision is expected to cut deeply into union coffers and membership, and the issues at stake in Bain could further debilitate union finances.