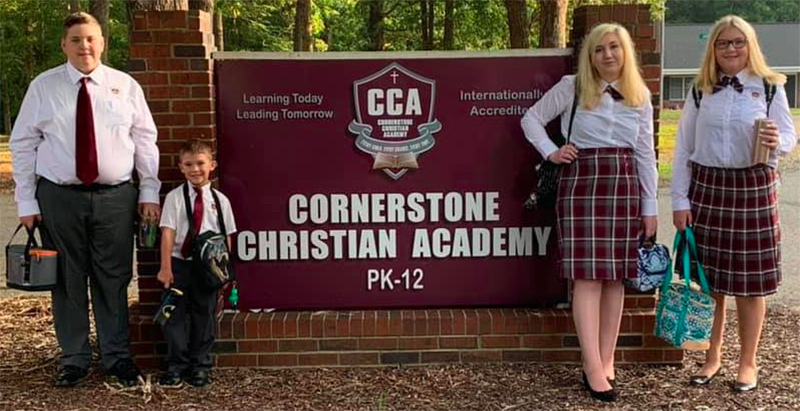 Cornerstone Christian Academy in Statesville, North Carolina remains open during the coronavirus pandemic. North Carolina is one of several states that have mandated public schools close, but not private schools. (Facebook)

On the morning of Monday, March 23, Sheriff Ron Hain braced himself for a strange kind of battle: making sure local kids didn’t go to school.

Hain runs law enforcement for Kane County, the fifth-most populous district in Illinois, and that day, he was headed for Northwest Baptist Academy in Elgin, about an hour west of Chicago. The small private school, which is affiliated with a Baptist church and has about 70 students, had been resisting Illinois Gov. J.B. Pritzker’s coronavirus-era order requiring the closure of all schools, public and private, through the end of that week.

Now, rolling his car to a halt in front of a monochrome landscape — the school’s beige buildings sat mute under a fresh layer of snow — Hain was struck by how quiet it all was. He and some of his deputies had been sent to intercept parents with copies of the governor’s compliance letter to discourage them from sending their kids to school. It looked as if distributing the flyers was going to be hard to do, however, because no one was there.

The team didn’t have to wait long for an explanation. A few minutes later, Keith Gomez, the church’s pastor and the head of the school, drove into the parking lot with a message: It was over. He had decided to comply. Like millions of other kids across the country, the students at Northwest Baptist Academy would stay home from school this week.

Gomez isn’t the only religious private school leader who has pushed back against state mandates ordering that schools close to stem the spread of coronavirus. The president of Liberty University, a private evangelical Christian university in Lynchburg, Virginia, drew controversy this week when he said thousands of students could return to their residence halls and faculty should remain on campus following spring break.

“I think we, in a way, are protecting the students by having them on campus together,” President Jerry Falwell Jr., who has publicly downplayed the risk of COVID-19, told the Richmond Times-Dispatch. “Ninety-nine percent of them are not at the age to be at risk, and they don’t have conditions that put them at risk.”

In Florida, where public and private schools have been shut down by the governor, pastor William Lytell kept his school, Gospel Baptist Church and School in Bonita Springs, open through the end of last week. (According to a recent interview, the school has since closed and transitioned to remote learning.)

In New Jersey, students at a private Jewish boarding school slept in dormitories for five days after Gov. Phil Murphy issued an ordinance shutting down all schools, before being helped home by police.

“I guess the tension is weighing the potential benefit of serving students in a face-to-face setting with the obvious potential cost of increasing the spread of the virus for families and the rest of society,” said Corey DeAngelis, an adjunct scholar at the libertarian Cato Institute who has studied and written about private school choice. “It all depends on what the school’s families want.”

DeAngelis: ‘School Choice for America’s Children’ Is a Great Thing. Federal School Choice, as Ted Cruz Proposed, Is Not. Here’s Why

As the novel coronavirus has spread throughout the country at an alarming speed, governors have faced the tough decision of whether or not to close schools. According to Education Week, as of the evening of March 23, 46 had decided to do so. Half of states have explicitly mandated that private schools close, too.

According to the National Center for Education Statistics, in the U.S. there are at least 98,000 public schools, compared with 34,000 private ones. Some states, which are scattered throughout the country and include giants like Texas, New York and California, have stated that both kinds of institutions need to close. Others, like Alabama, Connecticut and Minnesota, have only shuttered public schools.

All of this leaves some room for independent school leaders to make their own choices about closing. The fact that at least three private schools have pushed back against ordinances in Illinois, Florida and New Jersey — states with explicit stipulations pertaining to private schools — raises questions about what’s happening on the ground in places where the school closure mandates don’t address private institutions, and in states where there hasn’t been a state-level school closure mandate at all.

In North Carolina, for instance, public schools have been closed in a mandate that doesn’t apply to private ones, and at least one school, Cornerstone Christian Academy in Statesville, has left its campus open, according to Education Week. A Facebook post from the school Tuesday happily informed students, “Dress down on Wednesday!”

Jeff Walton, executive director of the American Association of Christian Schools, a membership group representing upwards of 700 Christian independent schools around the country, says that most of his member schools are currently closed but that some might still be open. “I’m sure they’re out there,” he said. Still, he added, “We would definitely advise schools to not just be in compliance with an order from a public health official mandate that covers them, but also to consider the public health risk of staying open.”

Kathleen Porter-Magee is the superintendent of Partnership Schools, a network of seven Catholic schools in Harlem and the South Bronx that recently closed in light of the coronavirus. She agrees that it’s important for the heads of independent schools to defer to local public health ordinances.

“Even though it’s always tenuous when the state tells private schools what to do,” she says, “if you’re talking about a single independent school, that school leader doesn’t necessarily have access to better information than the district, in terms of what’s happening on the ground with public health.”

When Porter-Magee was deciding whether to shut down her schools and when to do so, she was quick to check what her local district was saying. In that particular sense, the process was not dissimilar, she says, from how she decides whether or not to give her students a snow day.

“I think it’s fair to say that it would be a rare private school leader in a crisis like this who would stand apart from what governors and the superintendents of massive districts are doing,” she says. “If that private school had a concentrated outbreak of coronavirus, its leader would have a lot of questions to answer.”