Cortez: ‘In the Room Where It Happens’ — Parents Assuming Formal Authority to Drive Change

This is the fourth in a series of pieces on parent empowerment in partnership with New Profit. Read the rest of the series here.

Parents can assume a range of seven crucial roles that together create an infrastructure of parent power to drive change in education systems. Each of these roles creates value. Depending on an organization’s strategy, some roles will be more important than others.

PAVE (Parents Amplifying Voices in Education) provides an instructive case study in how to nurture parent power effectively across these roles, including an emphasis on parents assuming roles of “formal authority.”

“To achieve our ambition for our community, we need individuals in every role,” PAVE founder and CEO Maya Martin Cadogan explained. “But we also believe we need our members to be able to exert power not just on the system, but within the system.” 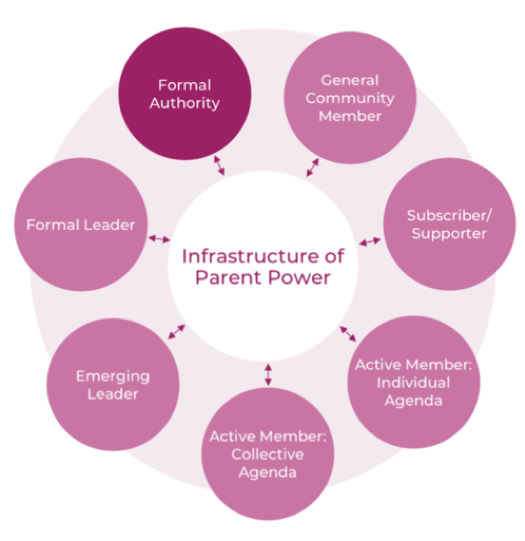 The role of formal authority includes parents who are:

● Elected: Parents who run for and win a publicly elected position on a school board or a local governing body such as a neighborhood commission, city council or state board of education.

● Appointed: Parents who are nominated and appointed to formal bodies such as education task forces, charter school boards or city commissions with a charge to address a need in their community.

A role in formal authority is not where most people start.

Running for office may not even be on an individual’s radar.

An appointment typically results after building a network of allies and cultivating trust and credibility in a community.

Securing a job in this work requires building skills and knowledge and deciding if the work is a true professional passion.

The PAVE team supports parents to identify and cultivate their innate power across this range of roles, knowing that for some, the role of formal authority can become the ultimate destination.

“We leave no talent and passion on the table” is a de facto motto at PAVE. “We meet members of our community where they are — there is not a single individual who can’t contribute to community-led change; but not everyone wants to contribute in the same way, and many people need a chance to discover the potential of their voice and actions,” Cadogan said.

PAVE begins by seeking out individuals to bring into their network. Staff go to back-to-school nights, community events at parks and libraries and events held by other community organizations. PAVE staff believe that “if you want credibility in a community, you spend time in that community.”

Existing PAVE active members also meet and refer other parents in their community to PAVE organizers, who then reach out and engage in 1:1 meetings with the purpose of understanding “their hopes, dreams and concerns, what is and isn’t working for their family in the city, and what changes they want to see.” Organizers also collect information on what schools the children of these parents attend, the ages of their children, and specific issues that impact them or that they otherwise care about — special education, ELL, school choice, accountability measures, etc.

Many of these parents become active members contributing to collective actions. Over time, PAVE organizers also identify a subset of parents who have the appetite and aptitude to pursue a leadership role in the organization.

Crucially, PAVE looks not for those potential leaders with the biggest voice, but those leaders most committed to the collective agenda.

As Washington, D.C., neighborhoods change, PAVE has also taken a deliberate approach to creating Parent Leadership in Education (PLE) Boards that reflect the whole community of each D.C. ward. PLE Boards not only lead on ward-specific issues but also collaborate to define PAVE’s D.C.-wide agenda.

The leadership experiences of PLE Boards then serve as a pipeline for PAVE to identify parents who want to pursue positions of formal authority.

“We get asked to have staff be involved in various appointed government bodies with important roles in trying to craft change,” Martin observed. But when PAVE gets these requests, Martin said its first response is always, “You need to have one of our parent leaders involved,” because “we may want to be there as policy wonks, but we want our leaders in a position of authority to represent the community voice.”

Yolanda Corbett is one of these PAVE leaders. She was appointed in 2017 to the D.C. State Board of Education’s Every Student Succeeds Act Task Force. Corbett also co-founded the Parent Advocate Leaders (PALS) Group, which helps families of children with special needs learn how to access resources. She now wants to run to represent her ward in elected office either at the local level on an Advisory Neighborhood Commission or on the State Board of Education.

“PAVE thinks about how we, as parents, can share our voices, unlock the power that we already have within and build power together,” Corbett said. “They helped me to understand how to organize my community and are now connecting me to the trainings I need to run for office so I can grow my leadership and bring the community back into the classroom.”

In reflecting on helping her members pursue positions of formal authority, Cadogan provided this counsel: “If you give parents opportunity, their leadership and journey of empowerment extends in ways you can’t predict when you first meet them. Seed as many parent leaders as you can, and then cede authority to them so they can run with it.”

“For more information on parent empowerment in education, including how to use measurement to maximize impact in this work, please visit Parent Empowerment in Education.”