Cortez: An Infrastructure of Parent Power — The Magnificent 7

This is the third in a series of pieces on parent empowerment in partnership with New Profit. Read the rest of the series here.

Education systems can be fundamentally transformed when informed and organized parents exercise their innate power — individually and collectively — to create and sustain change.

In April, New Profit launched a web-based resource on parent empowerment in education with a focus on how measurement works in the space.

Like any social endeavor, parent empowerment organizations should think strategically about when and how they measure inputs, outputs and outcomes.

However, this work also has a fourth critical category of measures: the infrastructure of parent power.

Working in collaboration with 18 organizations in the parent empowerment space, we identified seven archetypal roles parents can assume in building and exercising an infrastructure of parent power. 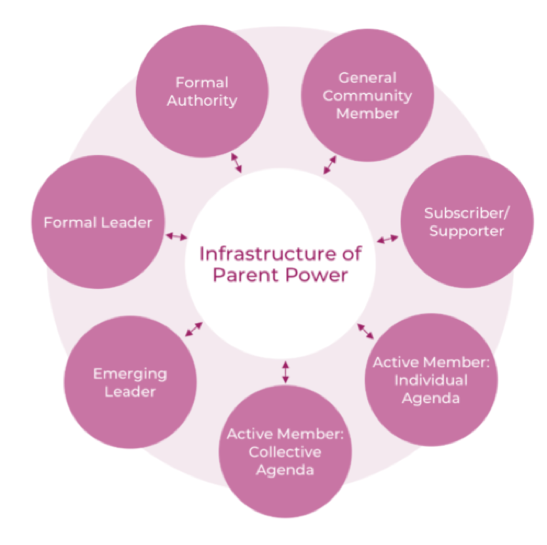 Each of these roles is different, but all create value. Organizations can quantify parent power by measuring the number of parents with whom they have relationships in each role.

Some organizations do this informally. Others measure the infrastructure of parent power based solely on specific actions such as public actions and canvassing.

Still other organizations explicitly define a set of parent roles and then invest in developing the number of parents in those roles necessary to succeed in a campaign (and ultimately across multiple campaigns).

An infrastructure of parent power is not built overnight. Infrastructure is about relationships between an organization and the parents they serve, and what parents decide they will do — individually and/or collectively — as part of this relationship.

As such, building infrastructure involves continual engagement with individuals to: (a) build and sustain relationships; (b) understand their needs as parents and priorities for their children and community; and (c) co-create compelling impact agendas that parents are willing to devote their scarce time and efforts to support.

“The early agenda-setting for any campaign has to happen closely with parents,” shares Jonathan Klein, founder and CEO of GO Public Schools. “We aren’t going to succeed at taking on an issue if there isn’t that critical mass of parent leaders and active members to partner with us, shape our approach and — if need be — help us build out a larger infrastructure to enable a campaign to succeed.”

We define the seven roles as follows:

1. General Community Member: An individual who is consuming value from your organization (e.g., going to your website or social media) or receiving mass outreach from you (e.g., mass mailing, mass emailing, advertising), but for whom you don’t have unique identifying information.

3. Active Member — Individual Agenda: A parent who is actively exercising their power through your organization with the focus being on meeting the needs of their children (rather than a larger collective agenda).

4. Active Member — Collective Agenda: A parent who is actively exercising their power through your organization on an issue or electoral campaign at the school, district, city, state or even federal level. This could include participating in one or more actions (e.g. house meetings, public actions or canvassing) both online and in the real world.

5. Emerging Leader: A parent beginning to lead others in collective action.

6. Formal Leader: A parent who sees themselves and is seen by others as a leader, can plan and execute collective action and is followed by members of their community.

7. Formal Authority: A parent who holds a formal role in the system — elected, appointed or employed — to have influence on decisions impacting their community.

An individual’s progression across these roles need not be linear — they can begin their relationship with your organization in any role. That said, most organizations plan an initial progression that moves clockwise through these roles.

An individual may move from one role to another (in any direction) over time depending on their life circumstance and their interest/alignment with your organization’s impact agenda.

Not every organization’s strategy requires parents to deploy their power in all of these roles! Organizations should customize which roles they prioritize based on a range of factors:

● The strategies they are employing to achieve that agenda;

● The actions within each strategy;

● The ecosystem of partners and other players who share this impact agenda.

For example, organizations focused on supporting parents as partners or on exercising the power of their choice are going to focus most on “subscribers/supporters” and “active members — individual agenda.”

Organizations focused on strategies around influencing the system through parents exercising the power of their collective voice (issue campaigns) or exercising the power of their vote (electoral campaigns) will focus heavily on developing an infrastructure of parents as active members working on a collective agenda and on emerging leader and formal leader roles (though general community members and subscribers/supporters remain important measures of broad reach and engagement with the community, and a pipeline to support parents moving into more involved roles).

It is worth noting that different organizations will use their own variations of this framework. Some may have fewer categories or more categories depending on what is applicable to their work. Some visually depict this as a continuum, while others lay this out as a ladder or pyramid.

While having a common language in the sector would of course be helpful, it is also not necessary. Ultimately what is most important is for an organization to create internal alignment about its framework for an infrastructure of parent power.

Organizations employ a range of measures in defining these various roles.

For more information on this, please visit our website on parent empowerment and measurement.