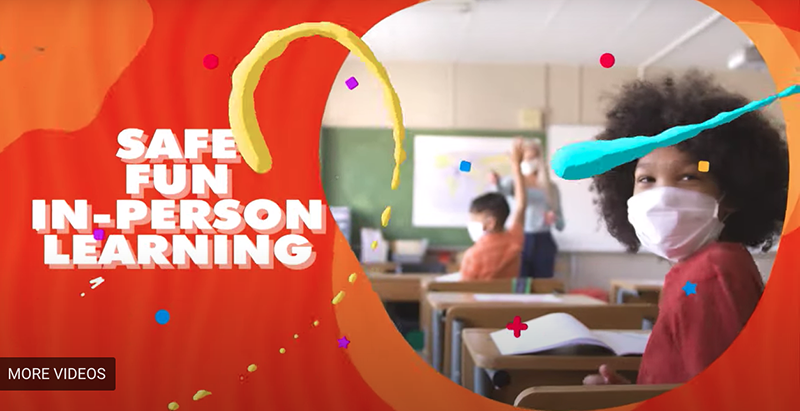 The Cleveland school district is trying to draw students to its summer learning program with television and radio ads. (Cleveland Municipal School District)

Don’t call it summer school. That has a stigma.

It’s not really summer camp either, since math and English will be taught every day.

The Cleveland Municipal School District’s “Summer Learning Experience,” an eight-week program launching next month, instead uses a strategy districts across the country are testing to help students rebound after a year of COVID disrupting their education and lives.

Schools are avoiding strict academics, betting instead on getting students back to class after a year away with a mix of fun activities and learning.

The hope is that a softer tone will rekindle students’ joy for learning not just this summer, but for years to come, helping them recover socially and emotionally, not just academically.

“We’re really thinking about how the recovery looks in the next one to three years and not the notion that somehow, in one summer, we’re going to recover everything from the pandemic,” said district CEO Eric Gordon, adding that mandating students attend summer classes would backfire and drive students away.

In Cleveland, academics and a menu of fun afternoon activities like music, sports, art or neighborhood improvement projects will be braided together.

“Here’s the reality: The kids who most need to be caught up won’t come to a summer school if they don’t enjoy it,” said teacher Dina Hoeynck, who will run one of the summer learning projects. “If we think of summer school as more of the same, drilling facts into their heads, the same kids will stay behind.”

Cleveland’s “Summer Learning Experience” will be dramatically different from past summer programs. The district has always offered summer school for high school students who need to finish classes to graduate. And in recent years, because Ohio requires third graders to test well in reading before advancing to fourth grade, the district has offered summer reading help to students in first through third grade.

But other grades were never included and non-academic activities were limited.

This year, the district is encouraging any student to attend, regardless of how they did in online classes this year.

“Summer learning can get a negative association sometimes, that you’re doing summer learning because you failed a class or you failed a grade,” said school board member Kathleen Valdez. “I want to emphasize that it’s for all our scholars, that It’s an enrichment and an opportunity for everybody to gain something out of it.”

The new approach to summer school is being adopted by many districts this year, ranging from Ohio districts like Akron and Columbus to districts like El Paso, Texas, San Diego and Miami-Dade.

The strategy is backed by President Joe Biden and Education Secretary Miguel Cardona, who included $1.22 billion in the American Rescue Plan aid package this year just for summer programs. They also joined with the Council of Chief State School Officers and the National Governors Association last month to create a Summer Learning & Enrichment Collaborative to stress enrichment and support as much as academics.

And it was championed by Stanford University professor Linda Darling-Hammond, who advised Biden’s transition team on education issues. Students, she said at a recent forum on academic recovery, had a lot of trauma this past year and need to be welcomed back into schools, not hammered with tasks.

“It should not look … like old fashioned summer school, where you’re drilling and killing, to make up on those worksheets, or maybe now on programmed computer instruction, what you missed,” she said. “ It should look much more like, where students are involved in inquiry and experimenting and figuring out the answers to questions, outdoors playing and inquiring, looking at puzzles and being together.”

“We have evidence that will increase kids’ capacity to attend, to engage, to want to be back in school and to open their minds,” she said.

Cleveland has not announced a target number of students or budget yet, saying only that it will use American Rescue Plan money to pay for it.

After two weeks, enrollment in the program is approaching 3,000 students, still a small part of a district of around 36,000 students. But the district has 24 billboards around the city promoting it and just started radio and television ads to attract students. And enrollment has been open only two weeks, with three weeks to go before its June 7 start. 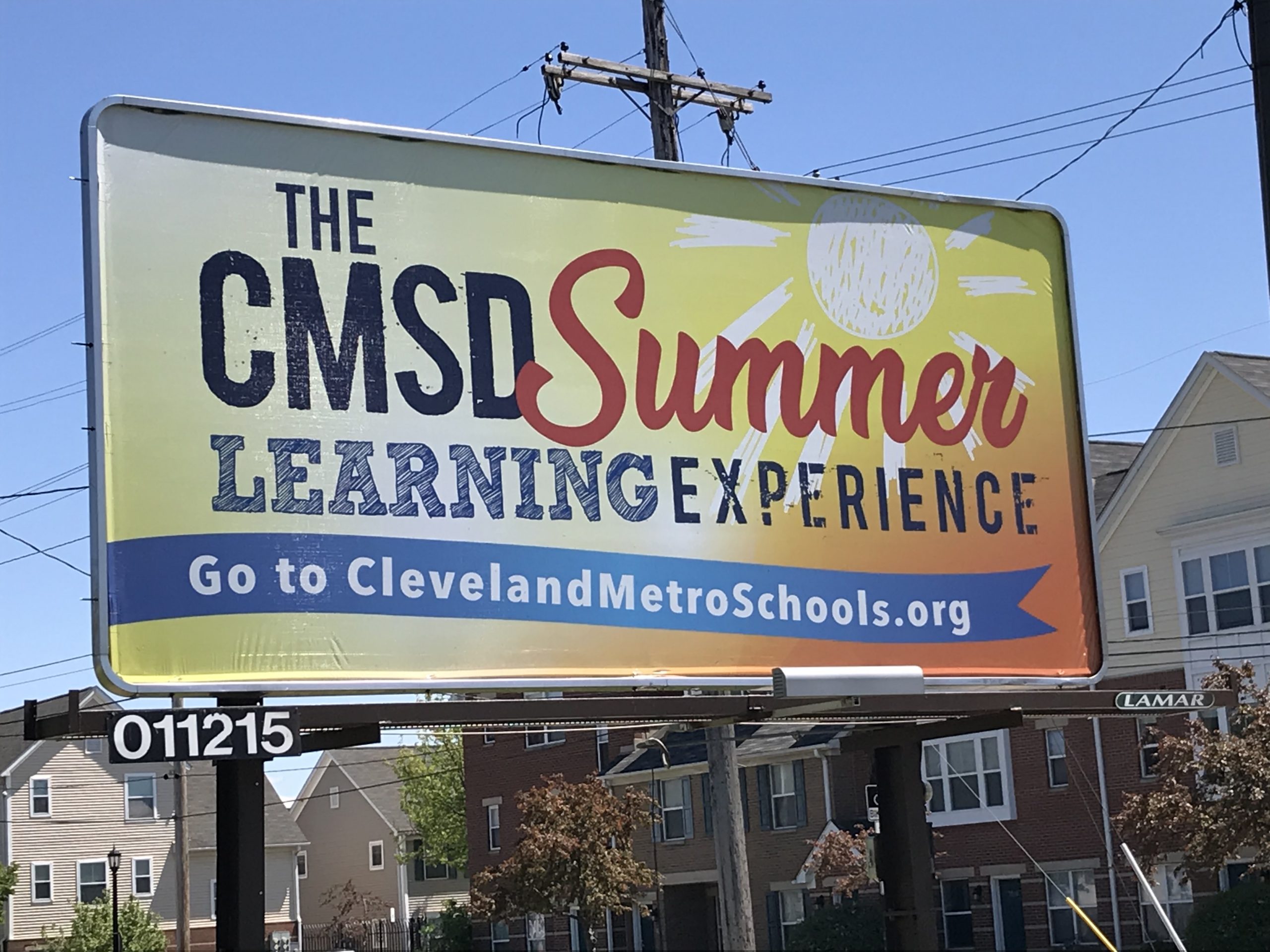 Some parents reached by The 74 knew little or nothing about it last week. But other caregivers are excited to see it start and have signed their children or grandchildren up.

Plans right now call for buses to take students from any of the district’s 100 schools to the 13 buildings hosting the program. (All modern ones with air conditioning.)

For each of two four-week sessions, days will be divided into three parts — Finish, Enrich and Engage — shifting from academic rigor to fun as the day goes on.

The “Finish” portion, which most resembles traditional summer school, spends the first 90 minutes of each day on teaching students math and English skills in small groups, separated by abilities.

By 10:30 a.m., students will shift to project-based learning, where teachers slip academic skills into projects students need to complete. Students will work on community gardens, LEGO projects, sign language, or assessing the strengths and needs of their neighborhoods and city to send recommendations to city officials. Many of the projects were proposed by teachers, who will then run them for students.

The Engage part of the day, from 1 p.m. to 4 p.m., will mostly be run by community groups and nonprofits that run after school and other summer programs, featuring sports, music and arts.

Hoeynck, who teaches visual art at the city’s New Tech West High School, will have high school students work in the darkroom at a local professional print shop, then design a piece of artwork for the neighborhood. She hopes students will learn not just how to make the art, which the students will select, but also the process of being a professional artist who needs clients and must design art to fit their needs.

‘Shantelle Barhorst and Laura Gladin, teachers at Cleveland’s Whitney Young elementary school, plan to give students a question to research. If the Cleveland zoo returned its elephants to the wild and suddenly had extra space, what endangered species should it add?

Students will visit the zoo, research endangered species and each present a proposal to zoo officials. Barhorst said students will learn about the needs of wildlife, their habitats and about how to propose ideas and present them.

She’s under no illusions, however, that missed school time will be solved.

“I don’t think a month is going to catch them up, but I think it will help,” she said.

Gladin said students will be glad to return, even over summer vacation.

“They haven’t been around their friends,” she said. “They want to socialize. They don’t care if it’s at school or at home.”