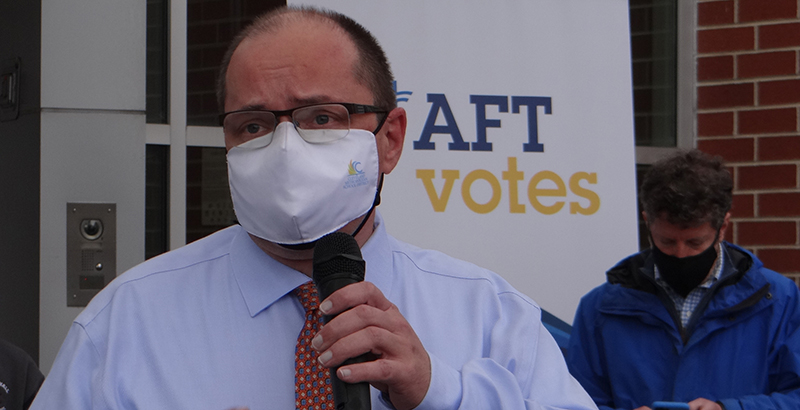 Cleveland school district CEO Eric Gordon, shown here at an American Federation of Teachers event in the fall, has pledged to reopen schools by March 1 even as teachers statewide are concerned they cannot be vaccinated fully by then. (Patrick O’Donnell)

Cleveland school officials have pledged to reopen classrooms for all students March 1, despite concerns that there are not enough doses or time to fully vaccinate all teachers and staff by then.

There’s also uncertainty over whether Cleveland can bring students back to classrooms in phases, as the district has planned for several months.

Earlier this week, Cleveland joined 96 percent of school districts statewide signing on to Ohio Gov. Mike DeWine’s ambitious goal of bringing students back to classrooms quickly. That plan calls for starting teacher vaccinations Feb. 1 and giving all families the ability to send kids to school by March 1, even if only part-time.

It has also touched off debates statewide and sparked worries from teachers in Ohio’s other large cities about whether enough vaccinations can occur for reopening to be safe.

DeWine has offered priority for COVID vaccines to the staff of districts and schools that promise to reopen at least part-time by then, putting them in stage 1B of the state’s vaccination plan with senior citizens and after the health care workers and nursing home residents and staff in stage 1A.

Ohio’s teacher unions are pushing back against DeWine’s urgency to reopen. Ohio Federation of Teachers President Melissa Cropper on Tuesday said that trying to reopen soon is a worthy goal, but DeWine’s timeline is unreasonable and can put people in danger.

“We are concerned that the mandate will still pressure some districts into reopening before they are ready,” Cropper said in a letter to teachers. “The bottom line is that withholding the vaccine should not be used as a threat to get schools to open. We believe that the Governor should be working with educators to determine safe opening conditions and then trusting educators to make the decision about when those conditions have been met.”

Cropper also noted that high levels of COVID cases in many areas still present a risk and that it is still unclear whether vaccinated people can still infect others. There’s no good plan for testing students, she said, and though some schools have space to seat kids at a safe distance, others do not.

DeWine’s plan would put Ohio in the middle of the pack nationally in offering vaccines to teachers. At least 17 states have already made them available to some teachers.

But Ohio, like other states, has a demand for vaccines far exceeding supply and DeWine is making no guarantees of how many doses teachers and other staff would receive by his March 1 target date. Instead, the pledge signed by Cleveland and other districts promises to open even if “complete vaccine administration may not be completed by March 1, 2021, and regardless of vaccine uptake by your staff.”

DeWine has not fully addressed how shortages could affect school staff, but he is already telling Ohio’s senior citizens, who received a head start on vaccines this week, that shortages could make many of them wait weeks or even months to be vaccinated.

“For now, we have a scarcity,” DeWine said last week. “That’s something that none of us likes, but that’s the world that we live in.”

For small, rural districts that are already open, the delay in receiving vaccinations won’t have much effect. But that delay is of great concern in cities like Cleveland, Columbus and Cincinnati, where teachers and families alike are cautious about returning to schools. COVID rates in those cities are high and students are often from poor and minority neighborhoods ravaged by the virus.

Cincinnati and Columbus officials have accelerated their reopening schedules in line with DeWine’s goal, drawing complaints from both teachers unions.

Though Gordon signed the reopening pledge, he has always talked about reopening after teachers receive both doses. He told the school board last week that the shortage of vaccine doses, coupled with DeWine’s Feb. 1 start date for vaccinating school staff, would make it tough to vaccinate all 7,000 district staff in just a month.

“The delay in vaccine availability, combined with the three-to-four-week period between the two required vaccination doses, means it is unlikely our CMSD employees will have received the full dose of vaccines until sometime in March,” Gordon said in a statement to parents Friday. He told The 74 he is trying to find out if he must reopen if teachers have only received one dose.

Gordon is telling parents, for now, that schools will remain closed and classes will be remote-only through Feb. 22. He has not announced plans for after that.

“We’re going to have to continue to monitor the actual rollout of the vaccine,” Gordon told the school board last week.

Asked Tuesday by The 74 if he intends to meet his pledge to reopen March 1 or is just buying time to see what happens, Gordon did not reply. Other school officials and advocates across the state noted that Gordon could withdraw the pledge before teachers receive vaccines or even after, if safety risks are too high.

But bringing back some students and not others doesn’t fit DeWine’s plan, according to Dan Tierney, a spokesman for the governor.

The Cincinnati Federation of Teachers has objected to that district’s school board voting Saturday to start bringing students back, even as the city has the highest levels of COVID risk, under the state’s tracking system.

“So many…teachers, staff and parents are confused by the Board’s decision to abandon all the guidelines they previously said would govern safe reopening,” the union said in a Tweet. “Lost trust is hard to regain.”

The Columbus Education Association is also objecting to plans to bring students back to school on Feb. 1. That’s the same day Ohio would start vaccinating teachers, so many might not even have a single dose, let alone two, by that date.

“Our members want nothing more than to return to in-person instruction as soon as safely possible,” said CEA President John Coneglio. “This means that the first round of COVID-19 vaccinations must be available to each returning Columbus City Schools employee prior to our students returning to blended learning,”

The Ohio Education Association, of which Columbus is a member, shares many of the Ohio Federation of Teachers’ concerns. But President Scott DiMauro isn’t objecting as strongly as Cropper – so long as schools maintain mask, cleaning and distancing rules.

He agreed that the March 1 deadline is unrealistic for staff to receive both doses, without a sudden increase in vaccine supply. But even if they do, the whole community won’t get them for months.

That’s why COVID rates and safety precautions also matter, he said. And he said DeWine needs to leave districts the flexibility to shut down schools or the whole districts if there are outbreaks.

“The vaccine itself doesn’t make schools safe,” he said.