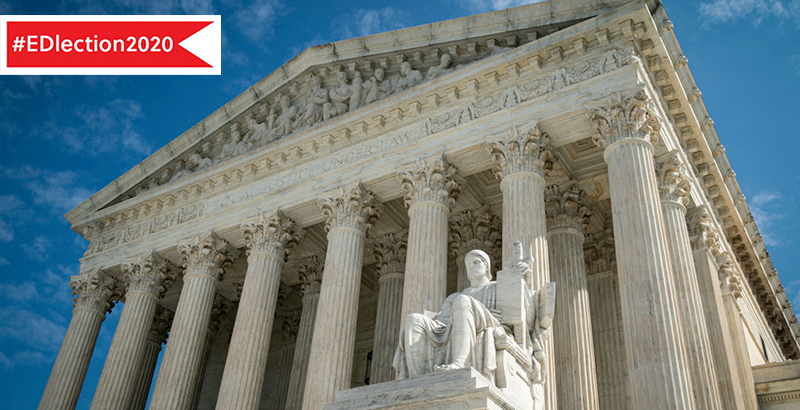 With its newly constituted 6-3 conservative majority, the U.S. Supreme Court on Wednesday will hear oral arguments in a Pennsylvania case that could affect the participation of religious groups in school choice programs.

Fulton v. City of Philadelphia addresses whether the city violated the First Amendment’s religious freedom protections by requiring Catholic Social Services, a foster care agency, to give up its opposition to same-sex relationships in order to receive a government contract.

While it doesn’t focus directly on schools, it comes after the court’s landmark decision earlier this year in Espinoza v. Montana Department of Revenue found that private schools can’t be excluded from a tax credit-funded scholarship program just because they’re religious.

“I imagine most of the justices in the majority in Espinoza will be suspicious of the exclusion of Catholic Social Services for the same reason they found the exclusion of religious schools unconstitutional in Espinoza,” said Joshua Dunn, a professor of political science at the University of Colorado-Colorado Springs.

The outcome in Fulton, for example, could affect a case in which a Baltimore-area Christian school is suing Maryland state Superintendent Karen Salmon, arguing that the state revoked its eligibility to participate in a voucher program because the school lacks a nondiscrimination policy that protects LGBTQ students.

Fulton will also be the first case involving religion before a court that includes newly-confirmed Associate Justice Amy Coney Barrett, a conservative Catholic who has connections to a church group and a network of Christian schools that has participated in Indiana’s voucher program and helped launch charter schools.

“You also have to think that Amy Coney Barrett would be sympathetic with the Espinoza majority,” Dunn said.

Meanwhile, the court could decide by early next year whether to take up another school choice case involving religious schools.

Three families involved in a case over Maine’s “tuitioning” program — which pays for students to attend any public or private school if their town doesn’t have a public school — are appealing last week’s ruling by the 1st Circuit Court of Appeals upholding the state’s 40-year ban on allowing families to use those funds at religious schools.

The three-judge panel, which included retired Supreme Court Justice DavidSouter, acknowledged the Espinoza decision. But it focused on the question that Espinoza left open: whether religious schools can be excluded because their curriculum might include religious teachings or worship. They wrote that even with the Espinoza decision, the question of whether schools receiving public funds can offer a religious program still deserves scrutiny.

To Arif Panju, a managing attorney at the Institute for Justice, which argued the Espinoza case and is representing the Maine families, the 1st Circuit’s ruling “has cert-worthy written all over it,” he said, referring to the legal jargon for the court agreeing to hear a case.

“This is why the Supreme Court exists,” he said. “We don’t think that the free exercise clause tolerates this discimimation. This is a situation that affects real parents and real children.”

But Alex J. Luchenitser, associate vice president and associate legal director of Americans United for Separation of Church and State, agreed with the 1st Circuit’s opinion.

“The Supreme Court has only said that states cannot exclude private schools from public funding on the basis of their religious status; the court has not required states to provide funding for religious education,” he said. “The Supreme Court should not deviate from that principle and should, therefore, decline to hear the planned appeal of the plaintiffs in the Maine case.”

With Barrett on the bench, the potential for another school choice case before the Supreme Court could have broad implications for the role of religion in public education. U.S. Secretary of Education Betsy DeVos added another wrinkle to the debate last week when she suggested that the Espinoza decision also paves the way for religious organizations to receive federal funds for charter schools in the future, even though the law currently prohibits it.

While Panju said it’s too soon to tell how rulings that lift restrictions on public funds for private religious schools could “play out in the charter context,” he said that as long as parents are exercising their “free and independent choice” to choose a school, there’s no violation of the First Amendment prohibition on establishing religion.

“There should be no issue with a religious entity operating a charter,” said Leslie Hiner, the vice president for legal affairs at EdChoice, an advocacy organization.

In fact, while the federal charter schools program doesn’t permit charter schools to be affiliated with religious organizations, the majority of states do allow such groups to operate charter schools. They have to provide a non-religious education and meet other requirements, such as participating in state assessments and opening up financial records for audits.

Luchenitser added that DeVos’s invitation to religious organizations relies on the Espinoza opinion, which “continues to prohibit charter schools from injecting religious content into their curriculum or activities or discriminating based on religion.”

The states that currently prohibit churches or other religious groups from operating charter schools are Delaware, Georgia, Maine, Maryland, Pennsylvania, Tennessee, and Washington, according to M. Karega Rausch, president and CEO of the National Association of Charter School Authorizers.

“The biggest question is going to be what … state legislatures decide to do with the Espinoza case and this signal from the federal government,” Rausch said. If courts eventually rule that charter schools’ staff and students should be allowed to practice their religion at school, he added, that raises “enormous structural and cultural challenges.”

The cultural divide, he said, would be between those who see charter schools as a way to improve public education and those who view them as a way to expand choice and “break up the monopoly” of school districts.

Other “huge, thorny” issues, Rausch said, include whether teachers are educators or ministers, an issue the Supreme Court recently addressed in its 7-2 vote upholding a religious institution’s right to disregard the antidiscrimination policies that apply to secular organizations, such as those affecting LGBTQ individuals.

Charter schools, he said, already struggle to maintain autonomy over staffing and financial decisions. “There’s always a movement to make charters exactly like district-run schools,” he added, suggesting that charter organizers might not want the additional oversight that would accompany a religious-oriented program.

Regardless of the outcome of the presidential election, any future legal battles would likely begin at the state level, perhaps in those states that currently prohibit religious groups to operate charters, Rausch said.

That could involve an organization using the Espinoza decision as the legal basis for a lawsuit if its application for a charter is turned down or a state legislature attempting to remove the restriction on religious groups running charters.

Dunn, at the University of Colorado-Colorado Springs, addressed the charter school question in a recent Education Next article. Written shortly before Barrett was confirmed, he said he didn’t expect public funding for an “overtly religious” charter school to be a reality in the near future.

But he said Barrett “may well prove more sympathetic to these kinds of claims.”