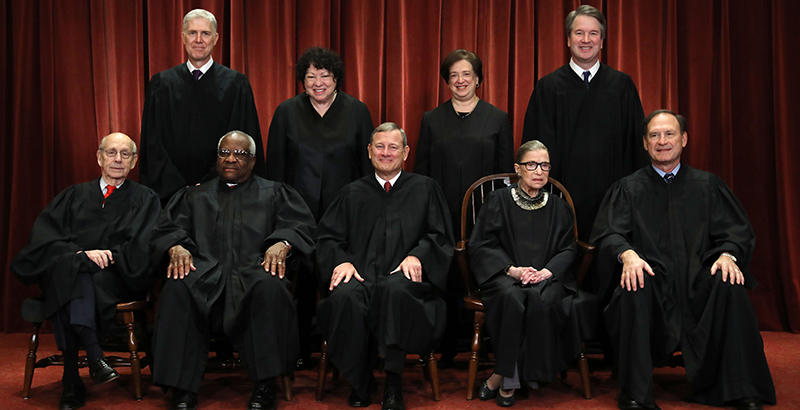 Chief Justice John Roberts pulled double duty on Wednesday. After spending the early hours of the morning admonishing senators on etiquette at President Trump’s impeachment trial, he rose early to preside over an hour of oral arguments in a Supreme Court case that could fundamentally alter the relationship between state governments and religious schools.

But if the chief showed up to work overly caffeinated, it didn’t show. In a session that veered from the technical points of legal standing to wide-ranging counterfactuals around discrimination claims, Roberts — the most likely candidate to play swing voter — kept his cards close to the vest. Depending on where he lands, the court could deliver a colossal victory to school choice activists like Education Secretary Betsy DeVos, who sat in the front row during the deliberations.

The case, Espinoza v. Montana Department of Revenue, concerns a recently invalidated program in Montana that allowed individuals to collect tax credits of up to $150 in exchange for contributions to scholarship organizations that allowed K-12 students to attend private schools. Two-thirds of Montana’s qualified private schools are religious in nature, however, which raised a problem: The state constitution contains a “no-aid” clause prohibiting public funds from being used for sectarian purposes, such as the construction of churches, seminaries or religious schools.

Consequently, the state’s tax department issued a rule forbidding the scholarships from being used to subsidize parochial school tuition; in late 2018, the Montana Supreme Court struck down the program entirely. Just a few months later, lawyers with the libertarian Institute for Justice filed the suit on behalf of parents who had sought to use the scholarships to help send their children to religious schools, arguing that the state was discriminating against them on the basis of their religion.

In a press conference after the hearing, plaintiff Kendra Espinoza decried what she called the “blatant discrimination” shown by the state. Her two daughters, shivering in the January cold as they stood beside her, relied partially on the scholarship program to attend a small Christian school.

“I think that our morals as a society come from the Bible, and I want that to be mirrored in what my children are learning in school,” she said. “I feel that we’re being excluded simply because we are people of a religious background, or because our children want to go to a religious school.”

Those complaints were heard and enthusiastically joined by the Trump administration, which filed an amicus brief claiming that the Montana court’s violated the First Amendment’s “free exercise” clause.

Arguing for the plaintiffs, Institute for Justice attorney Richard Komer faced a flurry of questions over whether his clients were, in fact, being discriminated against. Given that the scholarship program had been disallowed for all private schools, including those with no religious affiliation, Justice Elena Kagan said she was “having trouble seeing where the harm in this case is.”

“Whether you go to a religious school or you go to a secular private school, you’re in the same boat at this point,” she added.

Komer responded that, even though the tax-credit scheme had been struck down in its entirety, the initial “discriminatory judgment” was in violation of the U.S. Constitution.

Much of the plaintiffs’ arguments drew on the court’s ruling in the 2017 Trinity Lutheran case, in which a 7-2 majority found that Missouri had acted unconstitutionally in barring a religiously affiliated preschool from receiving a state grant to refurbish its playground.

But when Deputy Solicitor General Jeffrey Wall pointed to the Trinity precedent during Wednesday’s arguments, he faced significant pushback from the liberal judges. Justice Sonia Sotomayor, who dissented in Trinity, proclaimed it a “radical decision” that subverted the aims of the American Founders like James Madison.

“Since the Founding Fathers, a long history of people — for nondiscriminatory reasons, but for reasons related to their belief in the separation of church and state — have taken the position that the state should not give money to religious institutions,” she said.

Kagan, noting that she had sided with the majority in the earlier case, said that Espinoza was much less clear-cut.

Further questions arose over the legal standing of the plaintiffs. Both Justices Sotomayor and Ruth Bader Ginsburg expressed doubt that parents of would-be scholarship students — as opposed to the taxpayers who would have received the tax credit, had they contributed to scholarship organizations — were the parties most directly impacted by the Montana court’s decision.

Chief Justice John Roberts echoed the sentiment, noting to Wall that “the injury flows through the schools.”

“I mean, the money would go to the schools, not to the parents,” he said. “And we don’t have a school in this case.”

Roberts is a potential swing vote in the case, but his conservative colleagues appeared persuaded by the plaintiffs’ arguments of discrimination. When attorney Adam Unikowsky, arguing on behalf of the state of Montana, agreed that it would be unconstitutional to design a scholarship program that would favor Protestant schools over Catholic ones, Justice Brett Kavanaugh asked how such a hypothetical differed from the state’s policy.

“What’s different when you say the scholarship funds can be used for secular schools but not for Protestant, Jewish, Catholic or other religious schools, because of the religious status?” he asked.

Critical to the historical context of the case is the provenance of the “no-aid” clause in the Constitution of Montana. The state is one of 38 with constitutional prohibitions against sending public funds to religious institutions, most prominently schools. Many such laws, including Montana’s, were adopted amid a fit of anti-Catholic hysteria in the late-1800s expressly to deny Catholic families an educational option outside the public school system (typically inflected by Protestant religious teachings at the time).

Kavanaugh noted that the bans, often referred to as “Blaine amendments,” were “rooted in grotesque bigotry against Catholics.” Unikowsky responded by pointing to Montana’s adoption of its most recent state constitution in 1972, which retained the no-aid clause even in the absence of sectarian animus.

Further comparisons were drawn to racial discrimination. Echoing claims made by Komer for the plaintiffs, Justice Samuel Alito argued that it would be discriminatory for a state to invalidate a scholarship program on the grounds that its recipients were predominantly black.

In response, Justice Stephen Breyer, a liberal, observed that the First Amendment’s language barring government from establishing a state religion created a distinction not present in claims of racial discrimination.