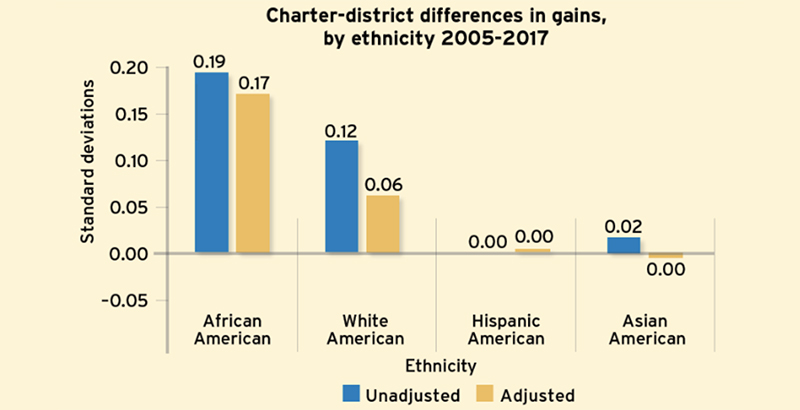 The chart shows differences in charter and district students’ growth on the National Assessment of Educational Progress, by ethnicity. (M. Danish Shakeel and Paul E. Peterson)

Over a 12-year period, charter school students made gains in reading and math on national achievement tests roughly twice as large as those made by students in district schools, according to new research appearing Wednesday in the journal Education Next.

Black students and those from low-income families made the greatest improvements over time. After trailing in both subjects in 2005, students in charters caught up with district students by 2017, even slipping a point ahead in fourth- and eighth-grade reading, the study shows.

Researchers M. Danish Shakeel and Paul E. Peterson of Harvard University — who analyzed millions of results on the National Assessment of Educational Progress — attributed the gains to the improvement of schools in the charter sector and to the greater academic skills among the students choosing those schools.

“A sector would not become increasingly attractive to a better-prepared clientele if it was not improving its offerings,” they wrote. That improvement, they added, has likely contributed to increasing competition between district and charter schools. 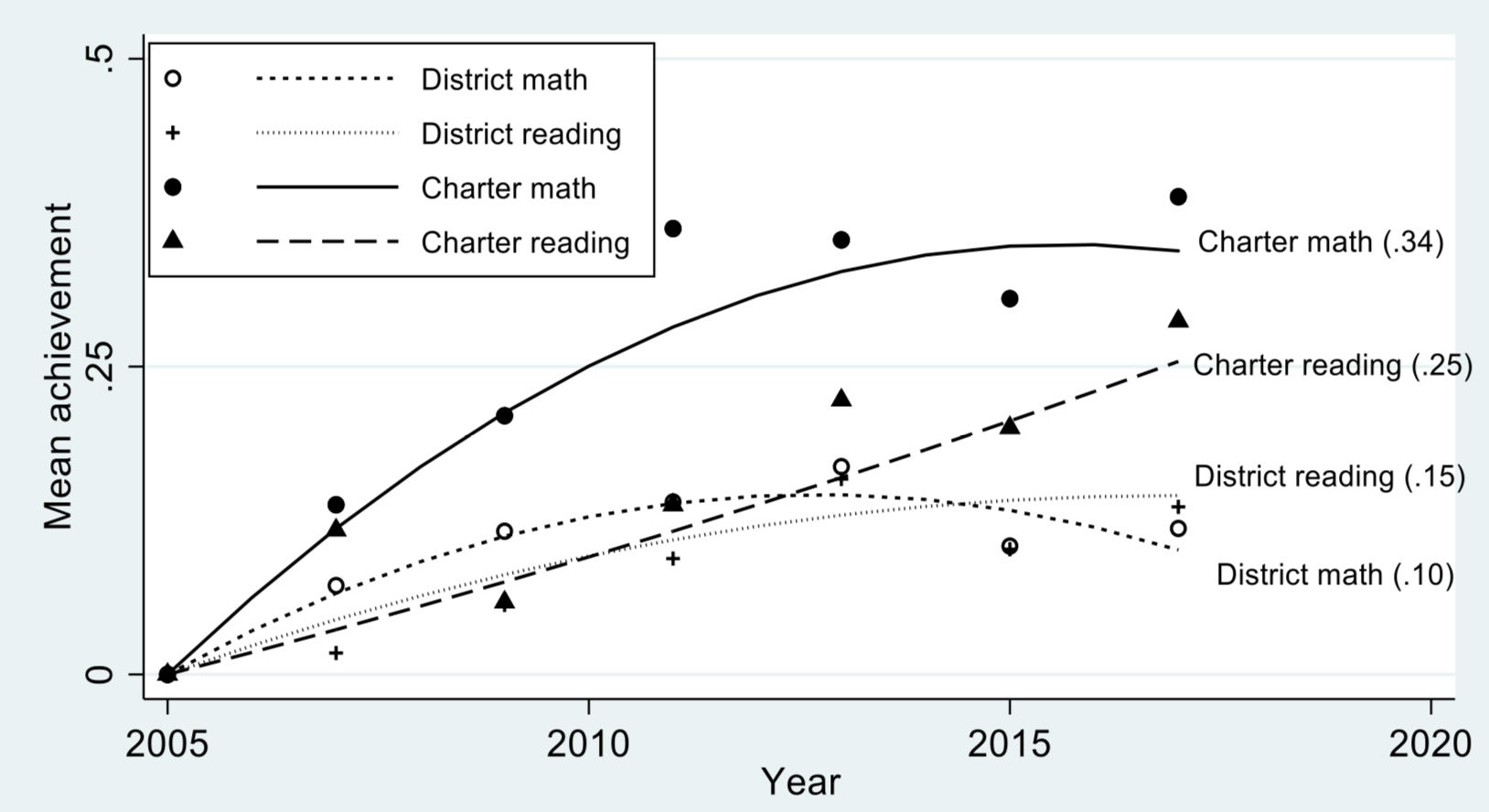 The image compares the performance of charter school and district students on the National Assessment of Educational Progress between 2005 and 2017 — a period of growth for the charter sector. (M. Danish Shakeel and Paul E. Peterson)

The study bolsters charter advocates’ arguments that independently run public schools are doing a better job than their district counterparts. It could also reinforce opponents’ view that families self-select into charter schools, making such comparisons unfair.

Charters Were Quicker to Provide Instruction, Regular Contact During Closures, Reports Say. But That’s Also How They ‘Keep the Kids,’ One Expert Explains

‘An alternative’ to the traditional

They show that in 2005, Black students in all schools scored lower in fourth-grade math than white, Hispanic or Asian students. And in the eighth grade, the gap between Black and white students was even larger.

“It was the size of these gaps that persuaded many states to establish charter schools as an alternative to traditional offerings in the district sector,” the authors wrote, noting that roughly a third of charter school students taking NAEP tests over the 12-year period were Black, the largest ethnic group in that sector.

By 2017, however, Black eighth-graders in charter schools made gains in math that were four times as large as those made by district students, and across both reading and math, Black students at both grade levels gained about half a year’s worth of learning, according to the study. White students in charter schools also made greater gains than those in district schools; the gains for Hispanic and Asian students in each sector were relatively similar.

The authors note that there’s no evidence that charter schools serving Black students are improving faster than those serving white students. But one explanation, they wrote, is that “African American students who attend charters are increasingly coming from backgrounds that leave them better prepared for school.”

Peterson added during a call with reporters that the smaller gains for Hispanic students is not necessarily a negative finding.

“Hispanic students make substantial progress in both sectors,” he said.

Critics of charter schools have argued that they serve families that are more savvy about maneuvering the educational system. In the paper, the researchers note that lotteries and central enrollment systems for choosing schools — in districts such as Newark, New York City, Denver and the District of Columbia — are meant to give all families an equal shot at securing a space in a charter school. But parents still have to understand the process to apply, and other researchers have found that more knowledgeable parents are still able to game the system. In addition, other reports have found a range of informal barriers to attending charter schools, such as not having transportation or expecting families to attend an open house as part of the admission process.

The Harvard study found that charter school students who qualify for free or reduced-price lunch also made greater gains than their peers in district schools. But in recent years, that program has become a less reliable measure of poverty, in part because some schools serve free meals to all students. For that reason, the authors said they have less confidence in those results.

They note that using NAEP scores to compare the two sectors has both advantages and drawbacks.

The samples of students taking the congressionally mandated exams every two years are representative of the nation and of the student population in each state. But the subset of charter school students who take the test is not necessarily representative of the charter school sector, the authors explain. The researchers had 4 million tests to analyze for district students, and 140,000 for charter students. While the charter sector grew during the years covered in the study, the schools still serve less than 10 percent of all students in public schools.

Margaret Raymond, the director of the Center for Research on Education Outcomes at Stanford University, noted that because there are more charter schools in urban areas, the results “get skewed” and may not be representative of charter school students statewide.

The center’s study of charter schools in 2013 showed higher performance for charter schools in urban areas. Although that study focused on state test scores, Raymond said it didn’t surprise her that “the results of NAEP charter measures would skew positive.”

Harvard’s Peterson added that past studies showing the strongest advantages for charter schools have been conducted in the Northeast. His findings also show that the gains were larger in that region.

Shakeel and Peterson frame their findings in the political context in which charters operate.

“The more rapid rate of progress by student cohorts in the charter than in the district sector may help to explain rising opposition to charters by school districts, district superintendents, and district teacher organizations,” they wrote. “When a sector of the economy begins to lose market share, those working within the sector typically seek government action to curb losses.”

California and Pennsylvania are among the states where district leaders have called for freezing charter growth in recent years. Placing a moratorium on new charters was also a frequent rallying cry during the early months of the Democratic presidential primary season.

But Republican support for charter schools is not as certain as it once was. In accepting the nomination for another term last month, President Donald Trump pledged to expand charters, calling them the “ladder of opportunity for Black and Hispanic children.” His administration, however, has proposed to cut the federal Charter Schools Program, which provides support for new schools.

Support for charter schools has waned among conservatives, possibly because some charter advocates have “chosen to be outspoken in ways that have partisan implications,” suggested Rick Hess, an education policy expert at the conservative American Enterprise Institute. He noted, for example, the National Alliance for Public Charter Schools’ statement in support of the U.S. Supreme Court’s ruling that temporarily protects the Deferred Action for Childhood Arrivals program. The Trump administration has tried to end the program. “There’s a sense that charters are a more political wing of district schools,” Hess said.

‘The importance of patience’

The authors also compare their study to past research comparing the two sectors. As the body of research has grown, some experts have concluded that there is little difference between the performance of students in charters and those in district schools.

But that’s because most studies have looked at achievement at a single point in time and usually within a state or district, the researchers said. This new study builds on earlier findings because it uses a national sample and doesn’t focus on one particular geographic area. It also examines results over a long period.

Finally, they note that the improvement of charters over time suggests that weaker charters are being shut down and replaced with “more productive ones.” That’s the way the model is supposed to work, Nina Rees, president and chief executive officer of the Alliance, said in response to a recent report from the Network for Public Education, a nonprofit that opposes charter growth. Its report focused on charter school closures between 1999 and 2017 and showed that about half of the schools operating during that time closed after 15 years. It characterized charter schools as “a big risk for families.”

But other researchers have examined gradual improvements in the sector, with less-qualified charter school operators dropping out of the mix and the student population in charters growing more stable.

A study of Texas charter schools between 2001 and 2011 noted that families with higher-achieving children appeared to develop more favorable opinions of charter schools over that decade.

The authors, including Patrick Baude at the University of Illinois at Chicago and Eric Hanushek at Stanford University, wrote that the findings also “highlight the importance of patience in evaluating a large‐scale educational reform, particularly one that relies on parental choices and market forces.”

Submit a Letter to the Editor
September 9, 2020