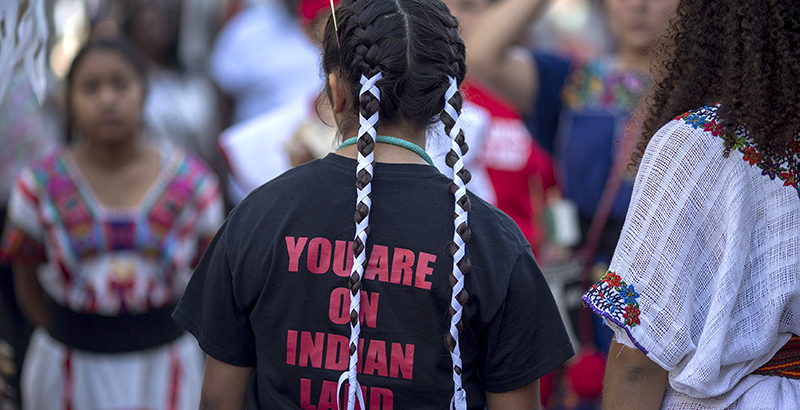 In one incident, a teacher grew frustrated with a student because he wouldn’t respond to her, not realizing that in the student’s Native American tribe, exhibiting silence is a sign of respect to an authority figure. As punishment, the student was denied recess. In another instance, a Native American student was accused of consuming drugs, interrogated by the police and subject to random searches for weeks after returning from a tribal ceremony that included the burning of sage.

These stories and others detail the limited awareness school officials can show about the cultures of Native American students, a group that’s likelier to be expelled in California, according to September figures tallied by researchers at San Diego State University and the Sacramento Native American Higher Education Collaborative (SNAHEC), which also collected the students’ stories. In fact, Native American boys are expelled at rates higher than any other student group in the state, the report finds.

The findings of the two groups, pulled from 2017-18 disciplinary data that schools self-report and share with the state’s department of education, shine a light on a student group often overlooked in conversations about justice and equity in California schools.

More than 30,000 Native American or Alaskan Native students attend California’s public schools, representing less than 1 percent of all public K-12 students in the state. In relatively remote areas, Native American students tend to receive disciplinary action at much higher rates than other students, the data show. Fortuna Union High District in Humboldt County suspends around three-quarters of its Native American males. In Kings County, Native American boys were 40 times as likely to be expelled than the statewide average.

Disciplinary action is associated with lower chances of earning a high school diploma and facing greater challenges with the law. In California, 68 percent of Native American students graduate from high school after four years, lower than the 83 percent for students overall.

Because many districts have few Native American students, the authors of the report said, there’s a temptation to dismiss the data as rounding errors that get in the way of telling a bigger picture of how all students are performing. But they take exception to that.

The small Native student population “[doesn’t] make this data less meaningful, in fact we think it makes it more meaningful,” said J. Luke Wood, a contributor to the report and a professor at San Diego State University. High rates of suspensions or expulsions for a small group of students can make them feel even more targeted.

“There’s always this piece of trying to remove Native people again and again from the data,” said Molly Springer, a contributor to the report and SNAHEC member, who added that addressing high rates of disciplinary action can be easier with smaller numbers of students.

She urged that districts learn from nearby tribes to become more familiar with their customs. A top recommendation of the report calls for the same, arguing that increased cultural awareness “is essential for preventing misunderstandings that lead to exclusionary practices that hurt Native American children and youth.”

The report’s title, “From Boarding Schools to Suspension Boards: Suspensions and Expulsions of Native American Students in California Public Schools,” echoes the long history of documented abuse Native American students suffered at the hands of public officials, including the forcible removal of children from their Native American homes and placement into boarding schools. The practice began in the 1870s as a way to acculturate Native Americans under repressive means, from banning the use of Native languages to forbidding long hair. It was all in the service of the slogan popularized by Col. Richard H. Pratt, an Army officer who founded the first such school – “Kill the Indian in him, and save the man.” In other cases, the boarding schools were the only option for schooling Native American children had.

Congress outlawed the practice in the 1970s. Springer said that while the report’s findings of high disciplinary rates don’t rise to the same level of “macro-aggressions,” they point to “another form of silencing.”

The authors expressed hope that a new California law will reduce the rate of suspensions. The legislation ends suspensions in grades K-8 for willful defiance, a catchall term that includes suspending students for refusing to remove hats or follow instructions. Use of weapons, violence, theft and vandalism are not covered by the law. The law’s focus on middle school students, which bans suspending them for willful defiance between 2020 and 2025, may address the fact that suspension rates for Native American students are highest in grades 7 and 8, the report’s data show. Native American boys are suspended at a rate of 16.5 percent; for girls, the rate is 9.1 percent in those grades.

“It’s a great step in the right direction,” Springer said of the law. Wood wants to release the report annually to track changes over time and keep pressure on districts that have disproportionately high rates of expulsions and suspensions.

“We’re expecting and hoping that the districts will take this seriously,” Springer said, “instead of saying it’s the students’ fault.”