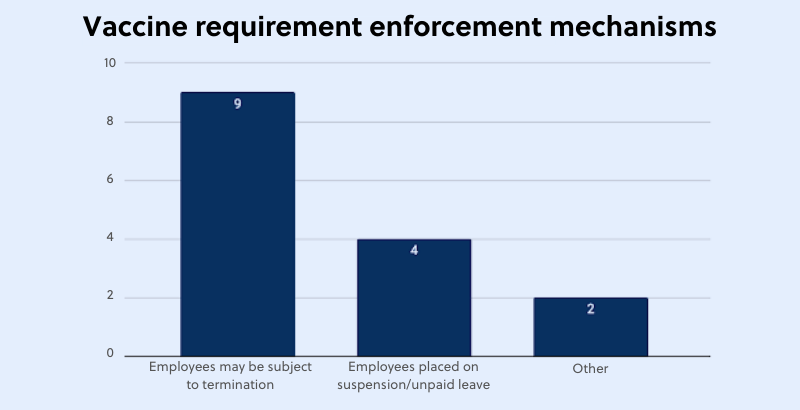 This the latest in a series of weekly analyses of COVID-19 policies in 100 large and high-profile school systems, produced by the Center on Reinventing Public Education at the University of Washington, Bothell. You can see the full archive here.

The next few weeks could be critical for demonstrating how vaccine mandates work in schools. A series of vaccine requirements in high-profile districts like Los Angeles and Chicago were set to take effect this week, with more to come before the end of the month, though legal battles, concerns about staff shortages and murky enforcement plans are delaying their impact.

More than half the districts in our review of 100 large and urban school systems aren’t requiring employees to get vaccinated against COVID-19. And more states ban vaccination requirements than require schools to implement them.

A minority of districts require all staff to get vaccinated; states play a role

Fifteen districts in our review require all employees to get vaccinated. The New York City Department of Education, one of the first, provides promising early results for a large school system. Tens of thousands of employees got their first shot after the mandate was announced in August, and when it took effect last week, 95 percent of school system staff had received at least one dose, including 96 percent of teachers and 99 percent of principals.

This week, mandates were set to take effect in the nation’s second- and third-largest districts, Los Angeles Unified School District and Chicago Public Schools — though L.A. Unified pushed its deadline back a month, in part due to concerns that enforcing its requirement could cause a staffing shortage.

Vaccination requirements are less common elsewhere in the country. More than a third of the large and urban districts we track, 43, require staff to get vaccinated, and 21 of those give teachers the option to accept weekly testing instead.

Not all districts have the freedom to choose, however. Fourteen states ban schools from mandating vaccination, while 11 states require it. While state leadership clearly influences local decisions, 28 districts in our review are located in states that allow vaccine mandates but have not instituted them. 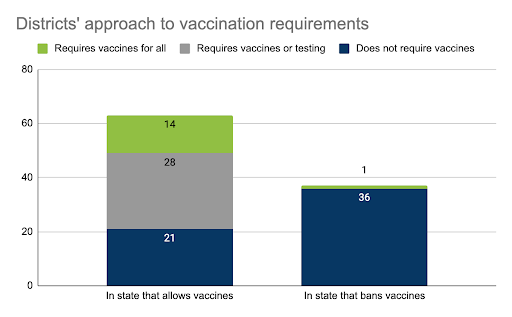 More than one-third of districts in our sample, 37, are located in states that do not allow districts to set a mandate. One, San Antonio Independent School District, moved forward with a vaccine requirement for all employees in violation of an executive order by Texas Gov. Greg Abbott.

Lawyers for the district declared that vaccines are “the No. 1 tool in a district’s toolbox to combat a pandemic,” and a judge agreed, refusing an attempt to block the mandate. The mandate is to go into effect Oct. 15 and will remain in effect unless it is struck down on appeal, with a court date set for January.

Two districts in Ohio, Cincinnati Public Schools and Cleveland Public Schools, also require staff to vaccinate or submit to regular testing. Their state restricts districts from requiring vaccines not fully approved by the U.S. Food and Drug Administration but has not pushed back on these requirements, which were announced after Pfizer’s COVID vaccine received full federal approval in August.

The 15 districts requiring all employees to get vaccinated typically give about two months between the vaccine requirement announcement and enforcement deadline. The majority of these mandates (10) were announced in August and are taking effect in October. San Diego has the latest effective date, Dec. 20.

In terms of enforcement, nine of the 15 districts threaten employees with termination if they are not vaccinated — but do not clarify what the process will be. Richmond Public Schools in Virginia says all staff who are not vaccinated by its Oct. 1 deadline are subject to progressive discipline, including loss of employment.

Denver Public Schools, which had one of earliest mandates among the districts in our analysis, said it would take disciplinary action, including termination for employees who did not comply. So far, the district has required unvaccinated employees only to submit to weekly COVID testing after its vaccine requirement deadline passed.

Four districts plan to place unvaccinated employees on unpaid leave or suspend them if they do not get inoculated. New York City is placing unvaccinated staff on unpaid leave through September 2022. Those who refuse can take a severance package or face other discipline.

For two districts, the consequences are unclear. While it requires all staff to get vaccinated, the School District of Philadelphia is not planning to terminate or suspend employees who do not comply. San Antonio Independent School District has not articulated what actions will be taken beyond a follow-up conversation. 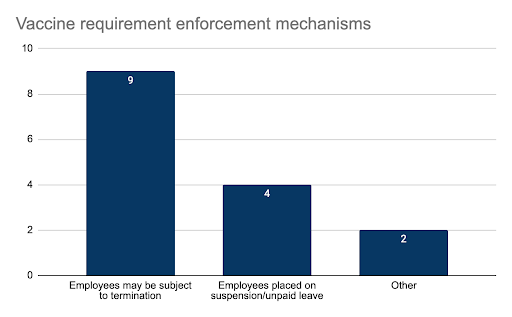 In lieu of mandates, some districts have resorted to other means to encourage vaccinations — particularly in states like Georgia, Texas and Florida that ban vaccine requirements. Almost all these districts (14 of 16) offer financial incentives. Stipends range from $200 in Orange County, Florida, to $1,000 in Dekalb and Henry counties in Georgia and Oklahoma City. Atlanta Public Schools is raffling resort stays in locations like Antigua and Panama.

These districts’ inability to require vaccines for their employees is leading them to spend money that otherwise could be used to guide learning recovery on strategies that don’t translate into student learning or well-being. DeKalb County, for example, could be looking at $15 million to incentivize a 100 percent completion rate among its 15,500 employees.

While a few districts give time off as an incentive for vaccinated staff, we have yet to see districts retooling their staffing assignments to offer unvaccinated staff new roles in remote or off-site positions. New York City is the only district communicating that it will reassign unvaccinated staff members, though this applies only to unvaccinated educators with specific medical conditions.