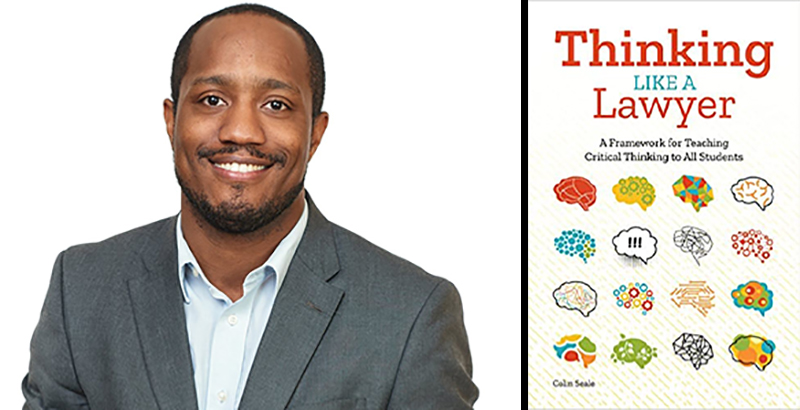 This essay is excerpted from the new book Thinking Like a Lawyer: A Framework for Teaching Critical Thinking to All Students by Colin Seale. The book, published on April 30, explores the critical thinking gap in education and provides a practical but powerful framework to teach the “how” behind the critical thinking skills our students need to be future-ready.

This gap is an important and urgent issue in the K–12 education system. Despite non-educators’ common belief that teachers just “teach to the test,” almost all high-stakes statewide assessments for math and English language arts are impossible to succeed on without critical thinking. Gone are the days of choosing simple fill-in-the-blank responses for problems that merely test skills and ability to perform a concrete task, like solving an equation. Today’s questions are more complex — requiring multiple steps, inferences, predictions, and careful judgments about which potential answer is best — and they are asked in a wide variety of unique formats.

But as important as standardized testing has become to school accountability, when I spoke to more than 300 educators to learn how the critical thinking gap impacted them, standardized testing rarely came up. What did come up? A school with lots of high-achieving students that ended up with 10 valedictorians speaking at their commencement because their top students could not stop fighting over who should hold this honor. Students cared more about grades and rankings than the process of learning itself.

Speaking of fighting, several secondary educators spoke of their challenges with student disputes escalating to blows faster than ever, especially with young girls. In fact, I was once in a principal’s office as she was reviewing our curriculum and expressing her excitement for how analyzing cases from multiple perspectives could help students improve their conflict resolution skills. At that exact moment, I heard a string of expletives followed by screaming, and the principal stormed out of her office. Two girls fought right outside of the principal’s front door. Students struggled to disagree without being disagreeable, leading to damaging impacts to school culture.

The impact of the critical thinking gap is clearly larger than academics. At the same time, the critical thinking gap is bigger than we think, even in programs for gifted and talented students. To start with, there are tremendous equity issues with the underrepresentation of African American, Latinx, ELLs, and low-income student populations in gifted education. But even if we figured out equitable identification practices, there are still far too many gifted and talented programs across the country that are gifted in name only. Often, these programs are limited to pulling students out of their classes once or twice a week to receive gifted services in elementary school. This ignores the fact that gifted students are gifted all day long and fosters a “not my job” mentality for general education teachers.

Equity Does Not Mean Everyone Gets Nothing: There’s a Better Way to Address New York City’s Gifted Gap

I can rattle off lots of numbers here. But numbers alone do not really tell the story of the negative impact of the critical thinking gap. Stories tell the story. I often recall a specific sixth-grade classroom I visited where more than half of the students were reading a book because they had finished their work already. I quickly noticed that this was a classroom of English language learners. The teacher herself had the firsthand experience of being an ELL as a child. But I was surprised when I looked at the student worksheets and realized they were adding “ing” onto the end of verbs. This was a sixth-grade class, but the bottom of this worksheet indicated that the worksheet was from a third-grade textbook. When I asked this teacher why her students were doing third-grade work in the sixth grade, she informed me that they were “very low” and “could not handle” the grade-level work.

I have seen school leaders say “enough is enough” to these types of low expectations. These school leaders often implement rigorous math and English language arts curriculum across the board to ensure that students are accessing challenging, grade-level work. One leader invested in expensive curricular resources and intense training and professional development for teachers to use this curriculum successfully. She was thrilled that a teacher with excellent growth results from a nearby school serving students who were from predominantly suburban, upper middle-class families was coming to her school, which served students from predominantly urban, high-poverty families. The rigor and critical thinking were present in this curriculum, in theory. In one lesson I observed, students had to analyze two pieces of text: one on the history of the traffic light and another on the history of community barn-building. Then they had to synthesize these texts to explain how these two practices contributed to the development of communities. But here’s the catch: This teacher drew a huge X across the text about traffic lights. According to this teacher, these students “could barely read” and “their writing was even worse,” so it was “impossible” to ask them to do the assignment as designed.

I agreed. It is impossible to expect students to be the critical thinkers that the 21st century demands when educators guarantee that students will not have access to critical thinking. According to TNTP’s groundbreaking report “The Opportunity Myth,” stories like these are more often the rule than the exception. TNTP concluded that students from low-income backgrounds were successfully completing 71% of what educators asked of them, but only 17% of the work they were asked to do was at grade level. The critical thinking gap ensures that even students who come to school every single day and do exactly what they are supposed to do will not be prepared for what the future demands.

The critical thinking gap is far from insurmountable because it is a gap in expectations, not potential. The truth is that students from low-income backgrounds, students who are linguistically diverse, and students from minority populations are often endowed with enormous critical thinking potential. Some call this being “street smart,” but I reject that categorization. Street smart is just smart. The failure to translate the practical set of problem-solving strategies associated with being street smart to whatever academically amounts to “book smart” is an adult issue, not a child one.

Outside of school, “street smart” children are the young people who are often forced to figure it out. The same ELLs who you might think are uninterested in analyzing nonfiction text at school are helping their families complete complex paperwork in English at home. The same students who did not take the time to analyze the credibility of a source they used in a paper are experts at assessing the credibility of people — a skill they rely on often to navigate their surroundings safely. If our goal is to build a solid house for critical thinking, the foundation and frame is all there. We just need to start building.

Book Excerpt: ‘Permission to Feel’ Shows the Power of Giving Students Tools to Understand and Regulate Their Emotions

Colin Seale is a critical thinking expert, achievement-gap-closing educator and attorney who founded thinkLaw — an award-winning program that helps educators teach critical thinking to all students using real-life legal cases and other Socratic and powerful inquiry strategies. He is a national speaker who contributes to Forbes and Education Post. Seale is the author of Thinking Like a Lawyer: A Framework for Teaching Critical Thinking to All Students.