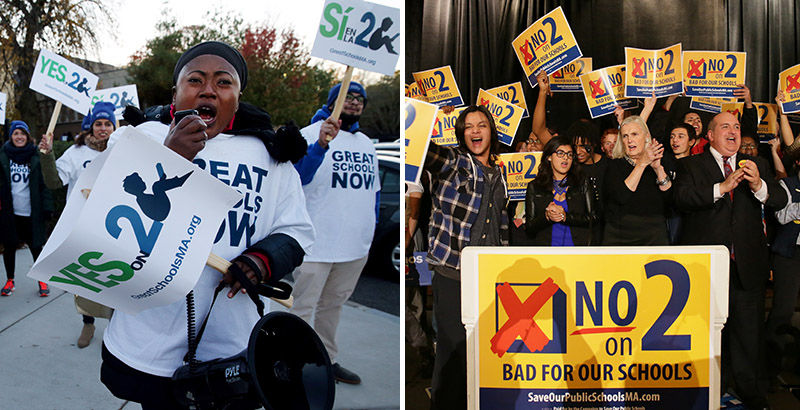 This essay is excerpted from the new book The Fight for the Best Charter Public Schools in the Nation by Cara Stillings Candal. The book, which publishes Tuesday, explores why Massachusetts charter schools are the best in the nation, the crushing defeat in 2016 to the effort to expand those schools, and how other states might replicate Massachusetts’s success — and avoid some of its mistakes.

In the aftermath of an ill-conceived ballot campaign in which Massachusetts voters overwhelmingly rejected raising the cap on charter public schools, the political impulse is to assume that this particular debate has been settled. In the pages that follow, Dr. Cara Candal skillfully demonstrates why that would be a mistake.

The charter school landscape that currently exists in the Commonwealth is grounded in the 1993 Massachusetts Education Reform Act (MERA). This landmark legislation, which contained the most significant changes to the state’s education system in generations, has been instrumental in making Massachusetts public schools the best in the nation. We were proud to have played central roles in the creation of this law in our former positions as Governor of Massachusetts and Senate Chairman of the Joint Education Committee. We would also like to acknowledge the significant contributions Mark Roosevelt, the then-House Chair of the Education Committee, made in the creation of this law.

Forces at both the national and state levels created the need for this legislation. In the early 1990s, lawsuits filed across the country were challenging inequities in state education financing systems. A notable 1990 New Jersey Supreme Court decision ordered the state to bring financing in poorer urban districts to equality with spending in wealthier ones.

Similarly troubling disparities existed in Massachusetts. To give one example, school districts in Wellesley were receiving approximately $25,000 per pupil, while students in Mattapan were receiving only $6,000.

As a result of the state’s broken educational financing system, countless urban minorities were trapped in failing public schools. The misguided practice of social promotion was widespread, frequently causing students to graduate from high school without the basic skills or knowledge needed to succeed in college or the workplace. Parents desperately sought alternatives to these failing schools for their children, but few options existed.

In its 1993 ruling in McDuffy v. Secretary of the Executive Office of Education, the Massachusetts Supreme Judicial Court (SJC) challenged the Commonwealth’s system of educational finance and standards. The SJC determined in McDuffy that the state, rather than individual localities, was ultimately responsible for ensuring that every child received a quality education, regardless of their economic status or the fiscal situation of the community in which they lived.

The MERA included a comprehensive set of measures for addressing these challenges. It established a new system for financing schools, known as the foundation budget, which ensured that each district had sufficient revenues to provide every student with an adequate education. The act set high standards that students would be required to meet and created a statewide assessment system called the Massachusetts Comprehensive Assessment System (MCAS) for measuring progress towards those goals. As Dr. Candal explains, the foundation budget and MCAS made Massachusetts one of the first states in the nation to link educational funding to standards and accountability for outcomes. This was the “grand bargain” that served as the foundation of the MERA.

To provide parents with more public education options for their children, the MERA also included a provision establishing 25 charter schools in the state. The cap on charter schools has since been raised on several occasions, most recently in 2010.

The latest attempt to raise the cap took place in 2016, when the legislature came up short in its effort to craft compromise legislation and then the electorate voted down a cap increase at the ballot box later that fall. Current Massachusetts Governor Charlie Baker was supportive of those efforts and continues to advocate for expanding charter schools in the Commonwealth.

Unfortunately, the conditions that led to the creation of charter schools in the MERA continue to persist. Although Massachusetts’s public schools improved and became the nation’s best in the wake of reform, not everyone has shared equally in the benefits.

The achievement gap between more affluent students and their less privileged peers remains. Today, the majority of students in the Commonwealth’s urban districts attend schools whose performance ranks them in the bottom 20 percent of public schools statewide. Most of those children are poor, black or Latino, and many are immigrants.

Meanwhile, nothing has proven more effective at closing the achievement gap than our charter schools, which are the best-performing in the country. A Stanford University study found that Boston charters are doing more to close gaps than any other public schools in America. Statewide, charter schools dramatically outperform their district counterparts.

In recent years, Massachusetts charter schools have also been educating a growing percentage of English language learners and special needs students. Charters had long lacked the information required to reach out to these students, but a 2010 law mandated that district schools provide charters with the necessary contact information and required charter schools to submit plans for recruiting these students.

Today charter schools are on a path, within a few years, to enroll virtually the same percentage of English language learners and special needs students as the districts their students come from. A number of studies also show that these populations perform better in charters than in traditional public schools.

One of the reasons Massachusetts charter schools are so good is that the limited number of available charters has required that great care be taken to choose the very best from among numerous charter applications. Demand for the schools is high, as demonstrated by the tens of thousands of students on charter school waitlists, and we believe modest expansion would not compromise quality.

One way to help ensure charter school quality remains outstanding would be to eliminate the Commonwealth’s so-called proven provider requirement. Currently, the percentage of possible charter seats doubles in school districts that rank in the bottom 10 percent statewide. But any seats above the original cap can only be offered by operators with a track record of success in Massachusetts. The result discourages innovation by the very element of education reform designed to inject innovative ideas into public education.

Charter schools’ success has been achieved without sabotaging the school districts from which their students come. Unlike in other states that have charters, Massachusetts school districts are reimbursed for students who choose to transfer. Over six years, districts receive reimbursements equal to more than two years of funding for every student they lose to a charter school.

Massachusetts’s Education Reform Act was fundamentally progressive legislation, providing far more state aid to poor school districts than to affluent ones. Unlike affluent students, their less privileged counterparts rarely have the option of attending a private school or moving to a community with better public schools.

In this volume, Dr. Candal takes a clear-eyed look at charter public schools in Massachusetts, describing their successes and noting areas in which they need to improve. Ultimately, she explains how we have waited decades for all school districts to deliver on the promise of providing all students with a first-rate education. Until they do, and as long as an option that does deliver on that promise exists, the charter school debate will rightly continue in Massachusetts. To settle for the status quo would be to compromise our students’ potential for success.

Disclosure: The Walton Family Foundation provides financial support to the Pioneer Institute and to The 74.

William Weld is a former federal prosecutor who served as the Republican governor of Massachusetts from 1991-1997 and was the Libertarian candidate for vice president in 2016. Thomas Birmingham is a distinguished senior fellow of education at the Pioneer Institute and a former Democratic president of the Massachusetts Senate who co-authored the state’s 1993 education reform law.