Anti-Racist Educators in Texas are Building a Movement. It’s Time for Our Colleagues to Get on Board 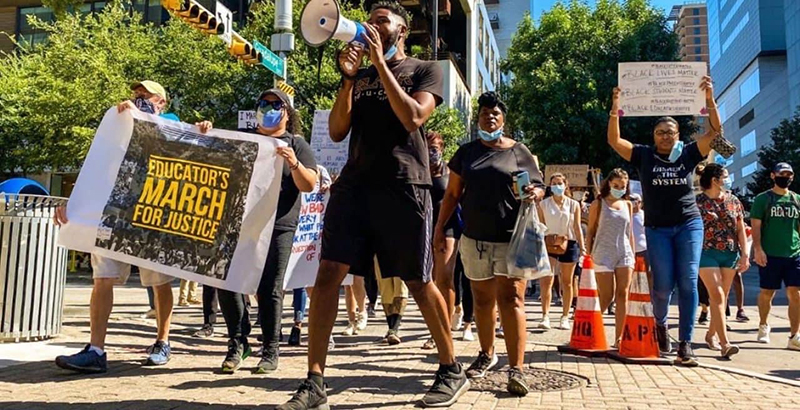 I’ll never forget the moment when a fellow teacher, a white colleague I had worked with for years, got in my face and told me that I didn’t care about a Black male student. She did this in front of my entire class, in MY classroom.

I’ll never forget how powerless I felt in that moment, and the anger that followed.

These feelings came flooding back after George Floyd’s murder. As communities across the country come together to grieve and to protest, I feel my own rage more acutely than I had in years. Even though these protests are primarily directed toward reform in our police departments, they’re really about pushing back against the racist structures and mindsets that have plagued American culture for the past 400 years. Black people have had enough.

That’s why this past June I helped to organize the Educators March for Justice, where hundreds of educators from Austin marched to demand racial justice in our classrooms. The stories my colleagues shared were heartbreaking. One Black educator, the principal of his school, was thrown to the ground and handcuffed by police after they were called because a student was suspected of having a weapon. His only offense? Being a Black man.

Other educators shared stories like my own. They’re fed up with being one of the few Black educators in their school, or tired of being gaslighted when they raise concerns about racism or implicit bias within their schools. For all of our frustration, the march also gave us reasons to hope that change is possible.

But while it was beautiful to see colleagues and educators of diverse backgrounds coming together in solidarity with Black co-workers, marching is only a small first step. The path forward will be harder and more complicated, because it involves examining our biases and changing our schools into places of liberation for Black students and teachers alike. To be clear: It is not enough for a school system’s mission just to be focused on delivering a high-quality education to students of color. Yes, that’s critically important. But impact comes by creating an anti-racist culture within our educational institutions so that Black students feel that they belong, and where Black teachers are valued and respected.

Here are three things that schools can do to embrace anti-racism as a core value:

The racism embedded in our public school curricula runs very, very deep. As a social studies teacher, I’ve seen the ways state standards ask us to teach history favoring a white and Eurocentric perspective. For example, the Texas Education Knowledge and Skills (TEKS) standards present a version of the Texas Revolution that glorifies white Americans as the heroes — and the only two people of color listed in that section of the TEKS are Lorenzo de Zavala and Juan N. Seguín, who helped white Americans take over Mexico, Texas. Texas standards are just one example; the problem is prevalent not just in Texas and in the South but throughout the country. We need to change the way we talk about our nation’s history — from its founding, through the Civil War, the Civil Rights Movement, and today. There are resources available to teachers who want to make this change, but it’s time for education leaders to mandate it at the districtwide, statewide, and nationwide levels.

Seventy-nine percent of teachers in the United States are white, and 76 percent are female. For as long as I can remember, the teaching profession has been the territory of white women. We need to move beyond paying lip service to the idea of hiring more Black teachers, particularly Black male teachers, and start doing the work to make our schools places that Black professionals feel welcome. This means supporting programs to cultivate prospective Black teachers, creating a pathway for Black teachers to be hired, including a more inclusive hiring process and alternative certification programs, and promoting Black teachers to be administrators, so that others can see a pathway for advancement within their schools. The benefits of empowering Black teachers within schools will be overwhelmingly positive for Black students, as well as others.

3 At the same time, create space for white teachers to confront their biases and become anti-racists

We can’t wait for more Black teachers to make change in our classrooms today. Our colleagues of all backgrounds — even those who consider themselves allies — need to do the work to confront implicit biases and change their perspective. School leaders must create the space for this to happen by prioritizing diversity, equity, and inclusion conversations, anti-racist readings, and racial equity trainings. Schools need to make this as much a part of professional development as we spend on mastering the new math or science curricula.

These are just three of many recommendations that teachers and administrators can commit to right now in order to change their school cultures for the better. I urge every superintendent, principal, and teacher who has “liked” a Black Lives Matter post on Facebook, posted a little black square on their Instagram page, spoken out in support of change, or even marched in the streets to now do the hard work of creating much-needed change in their own institutions.