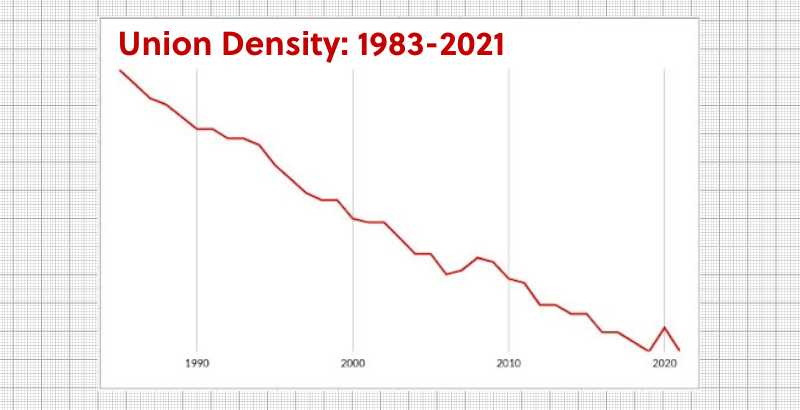 The U.S. Bureau of Labor Statistics released its annual report on union membership last week. It didn’t get much play in the press, because how many different ways can you report the same old story?

This trend has been going on with hardly a break for as long as we have been keeping these statistics. Since 1983, the U.S. economy has added 48.1 million workers and unions have lost 3.7 million members.

The one area of steady membership levels over the decades has been in local government. But now, even that is starting to sag. There are fewer than 4 million union members working for local governments for the first time since 1988.

One might think such tragic numbers would lead to some self-reflection on the unions’ part. That isn’t the case.

Unsurprisingly, the union-backed Economic Policy Institute echoed that position. “The substantial level of union activity in 2021 (including organizing drives and strikes), along with polling data showing the large share of workers who would like a union at their workplace, demonstrate that workers want and value unions,” it opined.

The notion that we should ignore the evidence of our own eyes in the service of what unions would like to be true seeped into reports all of last year.

“Here’s why 2021 could be a big year for labor unions,” reported CNN last March.

“With the American public’s popular support behind essential workers, a new union movement is perfectly primed to rise up in this country,” stated the Brown Political Review.

“America Is in the Midst of a Dramatic Labor Resurgence,” screamed a headline from The New Republic in October.

All these folks seem to subscribe to the idea that if you keep predicting the same thing over and over, eventually it will come true. After all, the world will end someday. But it is not this day.