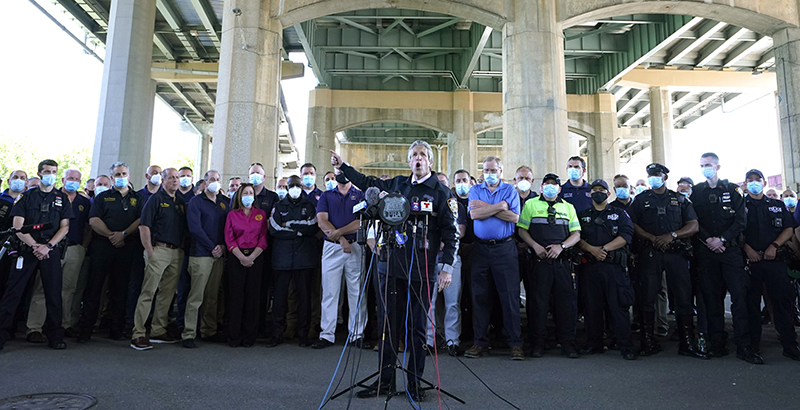 Unions representing police officers are different from other public employee unions. Their collective bargaining agreements intersect with, and sometimes circumvent, criminal law. And because the state authorizes cops to use physical and sometimes deadly force, accountability provisions have consequences well beyond those of any other union contract.

But they’re not that different.

Over the past week, we have been deluged with stories and editorials about police abuses and how unions protect officers to the detriment of the public welfare, particularly that of the black public. The Huffington Post, The New York Times, USA Today, The Philadelphia Inquirer, The New Republic and the Center for Public Integrity have all published scathing analyses of the various ways police unions are able to undermine the public interest. The list is long.

The Huffington Post says that “their political power with both Democratic and Republican officials has made them hard to tame.”

The New York Times says they are “one of the most significant roadblocks to change.”

“When liberal politicians do try to advance reform proposals, union officials have resorted to highly provocative rhetoric and hard-boiled campaign tactics to lash out at them,” the Times tells us. Not only that, but “as critics of the police get louder and more mainstream, union members have elected more aggressive leaders.”

A former attorney for the Service Employees International Union penned an editorial in USA Today explaining that police contracts often have provisions to expunge disciplinary records after a certain amount of time.

“Even in cases where an officer is fired for misconduct, the agreement requires an appeals process that frequently leads to reinstatement, especially if the investigating agency has committed procedural errors,” he wrote.

“The law enforcement community — and especially its unions’ — first response, when one of its officers is caught red-handed, is to circle the wagons, vilify the victim or survivor, and bat away any criticism or dissent as virtual sedition,” wrote Kim Kelly in The New Republic.

All these points should be familiar to union observers, and especially those writers expressing outrage these past few weeks. Not only have police unions been operating this way for a long time, but you could take any of the above quotes and apply them to teachers unions without hesitation.

This may help explain why other unions have been noticeably silent when the subject of police unions is broached. The Center for Public Integrity approached the leaders of 10 major unions and labor groups for comment on its story. None were willing to talk about police unions.

The backlash over police brutality is causing school districts to rethink their employment of sworn police, called school resource officers (SROs). These officers are usually contracted with the local police department, but in some cases they are school district employees, represented by the teachers union. Both the National Education Association and the American Federation of Teachers represent thousands of school security personnel, including SROs.

Momentum has been building over the past few years to eliminate SROs, but it is important to remember the pressure that was brought to bear by the public, politicians and teachers to deploy them in the first place.

School shootings were historically the impetus for much of the movement for placing cops in schools. “Let’s give school resource officers to every school that wants one,” said then-Sen. Joseph Biden in 2001. “Let’s give parents a little peace of mind that their kids are safe when they get on that school bus and head off to learn. Let’s give teachers a hand in maintaining order in their classrooms.”

A second boost to the idea was incidents of classroom violence. It is very easy to find multiple press stories and legislative testimony on it, usually brought to public attention by teachers union officers and representatives. Tennessee, Washington state, Connecticut, Pennsylvania, Ohio — all these tales describe assaults on teachers and the need for hiring more school resource officers.

Just a few months ago, in Kentucky, the Jefferson County Public Schools surveyed almost 2,600 employees at 51 middle and high schools to learn if they wanted an SRO in their school. Ninety percent did, and 82 percent wanted them to be armed.

Biden’s Tough-on-Crime Mantra Led to School ‘Militarization,’ Critics Say. Why His Legacy on Campus Cops Matters and Puts Him At Odds with Progressives

Only one school failed to give the idea majority support: the W.E.B. Dubois Academy, a middle school for boys that offers an Afrocentric and multicultural curriculum.

Many major districts now want to remove cops from schools. This may have a positive effect on race relations. Its effect on school violence is unknown. It’s also possible that all the attention being given to police contract provisions will cause the press and the public to demand greater oversight and transparency when it comes to public-sector collective bargaining in general.

I am not optimistic.