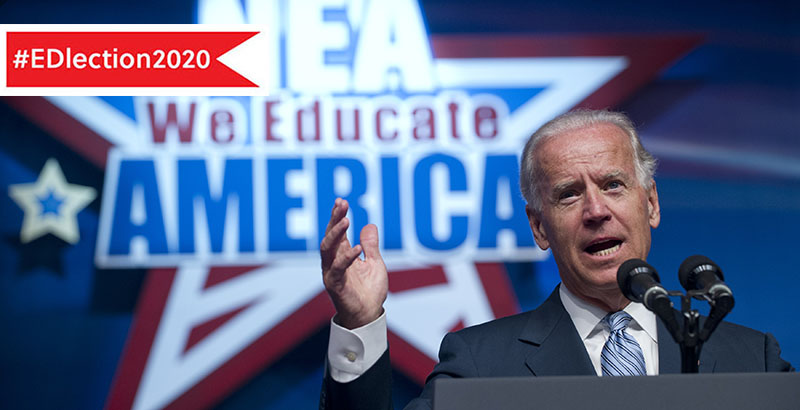 Both the National Education Association and the American Federation of Teachers were forced to cancel their conventions, scheduled for last month in Atlanta and Houston, respectively. Instead, they held virtual assemblies of union representatives from every state and U.S. territory. AFT was able to conduct most of its usual business, but the much larger NEA Representative Assembly was limited to three agenda items.

Outside of the ceremony, awards and speeches, both unions took up issues that required some action. This week, we will look at the NEA.

With 6,000 delegates, NEA could not reasonably conduct debates and votes online when those things are unwieldy enough in person. In April, the union’s board of directors approved a plan to postpone all the normal assembly business until July 2021, with the exception of electing officers, voting on an endorsement of Joe Biden for president and approving the union’s budget.

While all three could be discussed online at length, federal labor laws require voting to take place either in person or by mail. So, technically, the union took no formal action during the two-day virtual convention.

NEA tabulated the results of the mail-in voting last week, and there were no surprises.

Ninety percent of the delegates approved the budget, though we did learn from a hearing last month that even if they rejected the budget, the NEA board of directors had the power to approve it anyway.

This suggests that among union delegates, at least, NEA has been successful in bringing Bernie Sanders supporters back into the fold, after a very contentious Democratic primary season. There is no question about their unified desire to defeat President Donald Trump, but a question remains as to whether the pro-Biden delegates represent wholesale enthusiasm for the candidate among the rank and file. While Biden won a large portion of the vote, fewer than 5,500 delegates voted at all. That is a very low participation rate when compared with previous election years.

Finally, the delegates voted for NEA’s three executive officers. Officers are restricted to two three-year terms, resulting in leadership turnover that is uncommon for large national unions. However, the line of succession is more confined and traditional than even that of the Windsors.

The last relatively close election for the NEA presidency came in 1996, when Vice President Bob Chase defeated Secretary-Treasurer Marilyn Monahan with just under 60 percent of the delegate vote.

This year, Princess Moss of Virginia was elected NEA vice president with 88 percent of the vote. She was the sitting secretary-treasurer.

The real election battles occur for the post of secretary-treasurer, because that is where you enter the funnel for the presidency. Noel Candelaria, former president of the Texas State Teachers Association, won the position with 60 percent of the vote over three other candidates.

The question invariably arises about what kind of union president Pringle will be, and how she will differ from her predecessor. Chalkbeat has already interviewed her, but I would be cautious about making any early assumptions. No one inside or outside of the union knew Chase would be the purveyor of “new unionism” back in 1997, and I was convinced Lily Eskelsen García would completely supplant AFT President Randi Weingarten as the media’s go-to voice of teachers. I was very wrong about that.

Next week, we’ll look at AFT — “safety strikes,” a “raft of bold, progressive resolutions” and a one-person, many-votes delegate system.