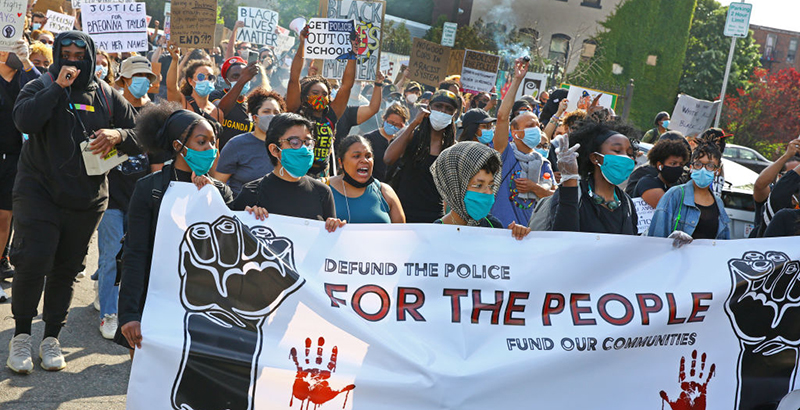 As more and more of the nation’s schools reopen, we will see the return of students, teachers, administrators, bus drivers, custodians, food service workers and … cops.

It seems like ages ago now, but the presence of law enforcement officers in the classroom was the hot-button issue in education circles for months. Police shootings outside the school environment and physical abuse of students within it led many to question the role of cops and school security personnel.

In 2016, a coalition of more than 100 civil rights groups called for “the removal of any law enforcement personnel assigned to be present on a regular basis in schools.” In the five years since, there has been movement in this direction in some places, but overall, the banning of police may have lost steam.

The school systems in Worcester and Somerville, Massachusetts, both suspended the use of school resource officers, who are sworn law enforcement personnel assigned to the districts. This was done only in the last two months. But the school boards in New Haven, Connecticut, and Poudre, Colorado, voted to keep SROs for now. The board in Fresno, California, is poised to follow suit, and Chris Geldart, the Washington, D.C., acting deputy mayor for public safety and justice, cautioned against removing school police too quickly.

“We’re always looking at how do we improve, but to pull [police] completely out of school, I don’t think that the community supports that,” said Geldart.

Activists and advocates are fighting to revive the issue. There have been student protests in the last few weeks in Providence, Rhode Island, and Fayette County, Kentucky. Recently, separate reports calling for the removal of school police were issued by The Appeal and the Brookings Institution. Even New York City mayoral candidate Shaun Donovan is championing the movement.

But all decisions regarding school personnel have to deal with the elephant in the room: the school employees unions. While some school cops are represented by police unions, many are members of either the National Education Association or the American Federation of Teachers. Both organizations have moved significantly away from their former full-throated support of school police, but they are still hesitant to get behind any effort that would inevitably lead to a loss of members.

In preparation for its virtual representative assembly in July, NEA distributed proposed amendments to its legislative program. The union uses the program to guide its lobbying of Congress and federal agencies. Many of the proposals have to do with police reform.

The focus of the amendments is on de-escalation of disciplinary incidents and review of procedures for racial and other forms of bias. But there is no call to remove law enforcement personnel from schools, and mentions of them carry an implicit assumption that they will remain.

The proposed changes to the union’s lobbying don’t lose sight of self-interest. NEA will absolutely oppose “the hiring of private security in place of school resource officers or sworn law enforcement officers.”

Fortunately for NEA, it has a way out of its school security membership dilemma. It will advocate for “reinvesting in federal programs to create safe and healthy school climates by increasing the number of mental health services to students, such as counselors, nurses, social workers, psychologists and other trauma-informed personnel.”

If governments and school districts embrace the hiring of these support employees in a big way, the unions may find it easier to let go of their police and security members. Until that happens, we won’t see widespread union support for their removal.