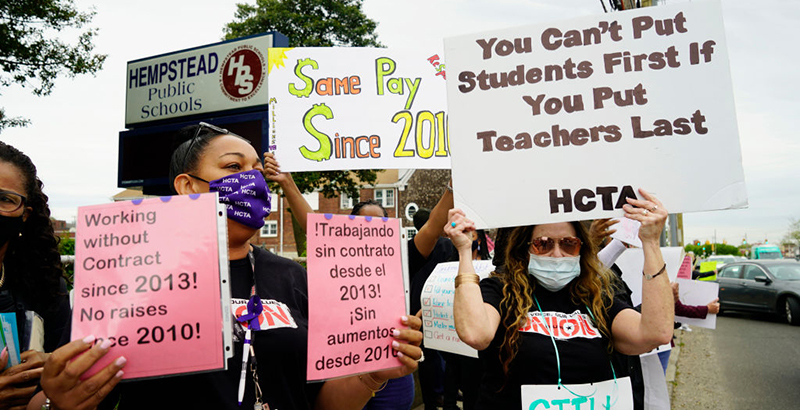 In one respect, however, they were very much alike. Little Rock spent 75.3 percent of its education funding on employee salaries and benefits that year. New York City spent 75.5 percent.

It is one of the anomalies of public education finance that the share of money devoted to compensation seems to have little relation to the location, size or union strength in a particular state or district.

The United States spent almost $657.5 billion on K-12 public schools in 2018-19, with 81 percent of that money going toward education employee salaries and benefits, according to figures published this month by the National Center for Education Statistics.

That share hasn’t changed much over the years, but the national average disguises the wide variety among states and local school districts. Here is a ranking of states from the largest percentage share spent on compensation to the smallest, computed from the NCES figures.

Click here if you’re having trouble viewing the chart.

One might have predicted that states like Massachusetts, Maryland and Washington, all with strong unions, would end up in the top 10. But no Virginia school employees had collective bargaining privileges in 2019. Nor do those in North Carolina. And Kentucky, Iowa and Indiana are not considered strong public-sector union states.

At the other end of the scale, you might expect Louisiana, Mississippi and Alabama — neighboring Southern states that all spend less than $12,000 per pupil — to have low percentages devoted to compensation. And they do. but all three are ahead of high-spending Ohio ($13,294 per pupil) and Alaska ($18,394 per pupil).

What’s more, just as the national average masks the differences among individual states, the state averages hide enormous variations at the district level. Here are just a few of the largest city school districts and the percentages they devote to employee salaries and benefits.

Click here if you’re having trouble viewing the chart.

I am hesitant to draw conclusions from this information. There is no question that the presence of teachers unions tends to result in more total spending on employee salaries and benefits. What these numbers seem to indicate is that their effectiveness in getting a larger share of that larger pie varies widely from city to city and state to state.

While the compensation figures raise a lot of questions, they firmly answer one important one. Dollars spent on public education overwhelmingly go to hiring employees, increasing the salaries of those already on the payroll or adding to their benefits. Spending on curriculum, textbooks, supplies and sundries is a small portion of school budgets.