Analysis: Delegates to AFT’s Virtual Convention Have a Very Long Wish List. That Doesn’t Mean the Democrats, If They Win, Will Go Along 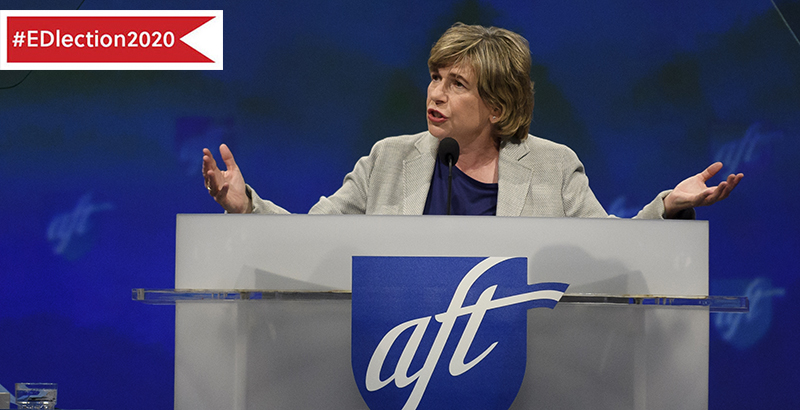 The American Federation of Teachers held its biennial convention entirely online late last month. Unlike the National Education Association, which was forced to severely limit its agenda, AFT carried on almost the same as it always has.

The smaller of the two national teachers unions, AFT is structured differently from NEA. It doesn’t practice term limits. Randi Weingarten is only its fourth president in the past 46 years, and will likely continue in that role for as long as she desires. An NEA delegate can get any business item on the floor for debate with the signatures of 50 other delegates. An AFT resolution must first be approved by a policy committee.

And then there’s the voting system for union officers.

NEA practices a one delegate, one vote system. AFT delegate votes are weighted by the size of the delegate’s local affiliate. New York City’s United Federation of Teachers had 123,219 votes this year. If only one UFT delegate returns her mail-in ballot this month, it will count for 123,219 votes.

Though AFT has locals in most states, it is dominated by one: New York. About 34 percent of its delegate votes come from New York locals.

It also bears mentioning that of AFT’s 10 largest local affiliates, only four are mostly made up of K-12 teachers. Government workers, college faculty, school support workers and nurses comprise the other six large locals.

In addition to presenting the usual speeches and awards, AFT delegates followed NEA by overwhelmingly endorsing Joe Biden’s bid to become president of the United States. But unlike NEA, AFT delegates chose to freeze dues levels for 2020. They will increase by 40 cents per member per month in 2021, with the money going directly to the union’s Militancy/Defense fund, from which strike support funds can be drawn.

AFT made national headlines last month when its executive council approved a resolution on reopening schools that included this segment:

“Nothing is off the table when it comes to the safety and health of those we represent and those we serve, including supporting local and/or state affiliate safety strikes on a case-by-case basis as a last resort…”

This was widely misinterpreted as meaning AFT was voting to strike, or authorizing a strike, or backing any “safety strike.” The resolution clearly states that such support will be granted on a case-by-case basis, which has always been AFT’s policy on strike support, regardless of the reason for a walkout.

It is entirely up to local affiliates whether to call strikes, as we are currently seeing in Detroit. It would be odd for AFT not to support a teacher strike, though the decision to contribute financially is why the “case-by-case” caveat is necessary. The union’s Militancy/Defense fund held less than $4 million in total assets as of Dec. 31, 2019.

AFT delegates passed a handful of COVID-19-related resolutions but expanded their agenda to encompass a vast array of what the union termed “a raft of bold, progressive resolutions.”

These final two have received the most reaction. AFT’s position on health care coverage has been criticized on the left because it falls short of fully endorsing Medicare for All.

At the same time, the left cheered AFT’s endorsement of the Green New Deal, while Frederick Hess and RJ Martin of the conservative American Enterprise Institute noted that AFT’s proposals run well beyond what the Democratic Party is advocating.

They also run beyond what NEA is advocating, at least in 2020. That’s not to say NEA would necessarily oppose a wealth tax, or removing cops from schools, or even the Green New Deal, but its representative bodies have not officially taken those positions.

The reason is simple: Most AFT delegates represent members from the Northeast and large urban areas. NEA’s membership is spread across all 50 states, with no one region dominant. Unlike AFT, NEA has to worry about how its policy positions play in places like Iowa and North Carolina.

Should Biden win and the Democrats capture the Senate, we will obviously see movement toward many of these AFT desires. But Biden is not Bernie Sanders or Alexandria Ocasio-Cortez, so AFT will have to wait until 2024 or beyond for its dreams to come true. And as we’ve learned in 2020, even the most unexpected things can happen to derail plans.