Aldeman: Mobility. Flexibility. Fairness. State Colleges Have These in Their Retirement Plans. So Why Don’t K-12 Districts? 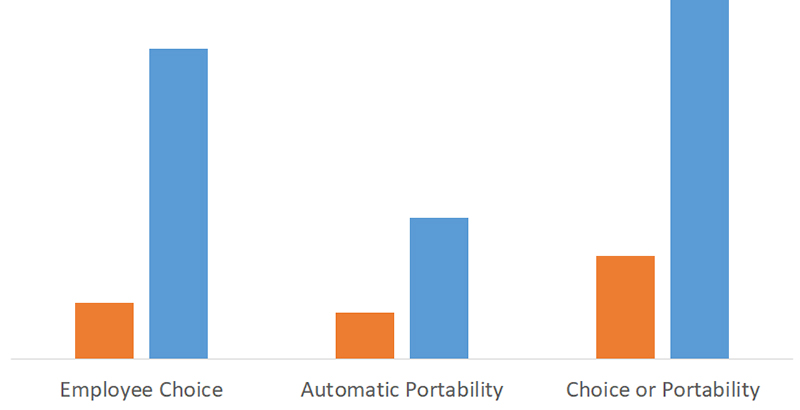 Author’s analysis of data from NASRA and NCTQ

Why do states give employees at public colleges and universities better retirement plans than they give their employees in K-12 schools?

The root of this disconnect started a century ago, when Andrew Carnegie created the Teachers Insurance and Annuity Association of America to provide guaranteed retirement income and life insurance, mainly to college professors who were at risk of changing employers without much in the way of retirement savings. Carnegie saw worker mobility as a given, and perhaps even a good thing, and wanted to design a retirement system that worked in concert with workers’ lives.

In contrast, states created their K-12 pension plans for a different type of employee who would stay at one job for his or her entire working life. At the time, many states forbade teachers from marrying or having children, and the only ones who remained in the profession had no other dependable sources of income. This was well before Social Security was extended to public servants, and states operated all-or-nothing retirement plans that awarded pensions to employees with 25 or more years of service.

In creating these plans, states could know exactly how many teachers they had at various years of service, and they could project how many people would become eligible for benefits. In this model, state retirement plans excluded transitory workers under the now-outdated assumption that workers who left the profession early could depend on other sources of income.

States have attempted to improve their plans over time, and 35 now enroll their K-12 teachers in Social Security, but pension plans still struggle to offer adequate benefits to workers who don’t remain in one school system for their full careers.

The graph below shows the bifurcation between these two very different approaches. In 33 states, higher education employees have a choice of retirement plans. In contrast, just six states offer their K-12 teachers a choice. In higher education, 15 states automatically enroll employees in a portable retirement plan such as a 401(k), a cash balance plan or a defined benefit plan with employer match. Just five states enroll their K-12 employees in any type of portable plan. All told, public higher education employees in 48 states either are automatically enrolled in a portable plan or have a choice to do so; just 11 states make the same options available to K-12 employees. 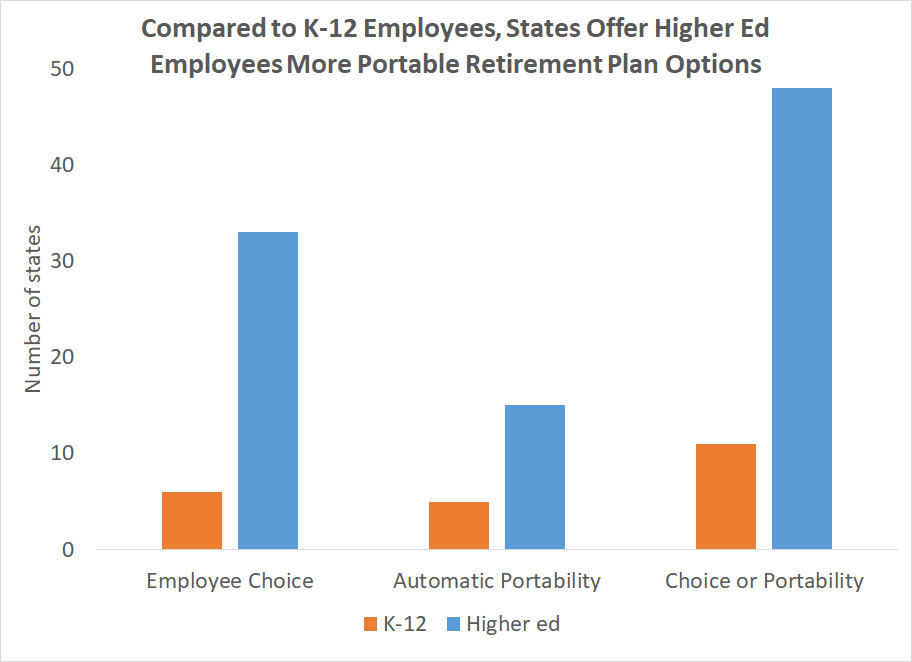 Author’s analysis of data from NASRA and NCTQ

But not only are the retirement plans offered to higher education employees more portable; in most cases, they are also more generous to workers.

The table below compares the portable retirement plan offered to employees at the University of California with what the California State Teachers’ Retirement System offers the state’s K-12 employees. (Both plans cover everyone on the payroll, including librarians, janitors, bus drivers and secretaries as well as faculty members.)

As the table shows, employees at California’s flagship universities have a better retirement plan on nearly all fronts. They have a shorter vesting period, meaning they qualify for employer-provided retirement benefits earlier. They get a larger contribution toward their retirement from their employer. And University of California employees are covered by Social Security, whereas the state’s K-12 teachers are not.

In addition to being generous, the university plan is cost-effective — unlike the K-12 CalSTRS plan, which has about $97 billion in unfunded liabilities. Between school districts and the state itself, the “employer” share of pension costs totals 28.2 percent of each teacher’s salary that must be put into CalSTRS, but only about one-quarter of that goes toward benefits. The rest, 20.6 percent of salary, goes to pay down those unfunded liabilities. In contrast, the University of California plan has no unfunded liabilities, and it never will, because it explicitly ties a worker’s benefit to the contributions made into the plan on his or her behalf. 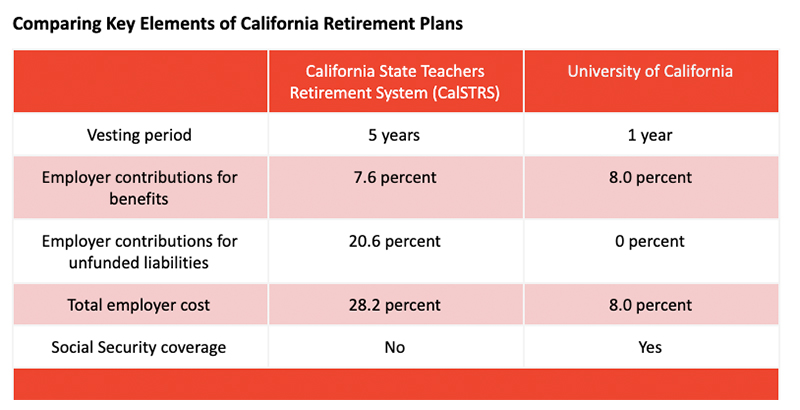 One final element is fairness. The University of California plan treats all workers the same: No matter how early they retire, university employees can depend on getting the same contribution rate as their colleagues.

In contrast, the CalSTRS pension plan has two benefit tiers based on the employee’s start date, and neither of them distributes benefits evenly. The pension formula awards disproportionately large benefits to teachers who stay for 25 or 30 years while giving else substantially less.

Taking all these factors together, it’s clear that participants in the University of California plan receive much more generous retirement benefits than K-12 employees in the same state. California is but one example, but it illustrates why all states should give their K-12 employees the same retirement plan choices as they offer to their higher education employees.

Chad Aldeman is a senior associate partner at Bellwether Education Partners and the editor of TeacherPensions.org. Bellwether was co-founded by Andy Rotherham, who sits on The 74’s board of directors.