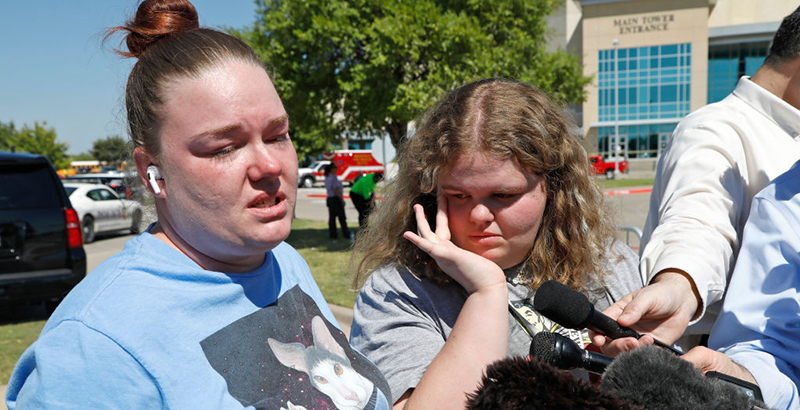 Stephanie Wade and her daughter Keeley, 14, talk to reporters as they are reunited after a shooting at Timberview High School on Oct. 6 in Mansfield, Texas. (Stewart F. House / Getty Images)

During a press call Thursday, leaders with Everytown for Gun Safety, the American Federation of Teachers and the National Education Association bemoaned a return to campus gun violence after a year without mass school shootings. There were 30 reported instances of gunfire on school grounds between Aug. 1 and Sept. 15, resulting in five deaths and 23 injuries, according to a tally by Everytown, a nonprofit advocacy group that promotes gun control measures. That’s the largest count during that back-to-school period since the group started keeping track in 2013 and comes amid a larger surge in violence outside of schools.

“For the past 18 months, we’ve been focused on keeping our students and educators safe, getting them back together in classrooms,” NEA President Becky Pringle told reporters. “Now, as students across the nation are returning to school buildings, we not only face the threat of an ongoing pandemic, we face record levels of gun violence on our school campuses.”

The most recent high-profile incident unfolded Wednesday at Timberview High School in Arlington, Texas, where four people were injured and an 18-year-old student was arrested and charged with carrying out the attack after a reported fight with another student. The suspect’s family told local media he was bullied and a robbery victim. Mansfield Independent School District spokesman Donald Williams said the school system is investigating the incident and its potential motives.

Earlier this month, on Oct. 1, a principal at the YES Prep Southwest Secondary charter school in Houston was injured after getting shot in the back on campus. A 25-year-old man who reportedly graduated from the school in 2017 was charged in the shooting.

Even before the pandemic swept the nation, America faced a gun violence epidemic, Pringle said. Yet, time and again, she said policymakers have failed to reach tangible solutions. She promoted gun control measures like expanding firearm background check systems and improving youth access to mental health care, but argued that other responses like arming teachers, active-shooter drills and school-based police could further traumatize kids.

The latest tragedies confirm the fears of criminologists and school safety experts who warned about the potential for heightened violence in schools as students repopulated classrooms after a year of isolation, economic hardship and social unrest during the pandemic. The carnage follows a year without a single mass school shooting, according to data from The Violence Project, a nonprofit research center focused on reducing such tragedies.

“As the mom of a teacher in Indiana, I was worrying a lot about what back-to-school would look like,” said Shannon Watts, the founder of the gun safety group, Moms Demand Action. “Sadly, back-to-school has meant back-to-school shootings for too many communities across the country.”

Though mass shootings happen elsewhere, the U.S. is a clear outlier. School shootings remain statistically rare and federal data suggest that schools have grown markedly safer in recent years, but there has been an uptick in campus gun violence leading to injury and death in the last several years. During the 2019-20 school year, there were 27 campus shootings that resulted in death and 48 in injuries, according to the most recent federal data. 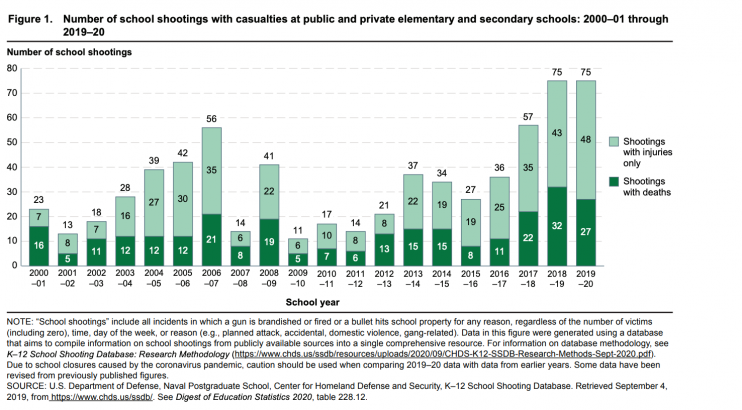 During the press call Thursday, advocates and union leaders said a comprehensive strategy is required to prevent gun violence in schools,

President Joe Biden has also called on Congress to back new gun control measures and for an increase in funding for police officers. Yet many of the proposed solutions highlighted Thursday — gun control, in particular — have long faced fierce opposition. Congress is already juggling several high-stakes, contentious issues including a potential budget impasse, an infrastructure bill and a long-term resolution of the debt ceiling.

“It shouldn’t be controversial,” she said. “There’s huge bipartisan support [among voters] for these common-sense safety measures.”