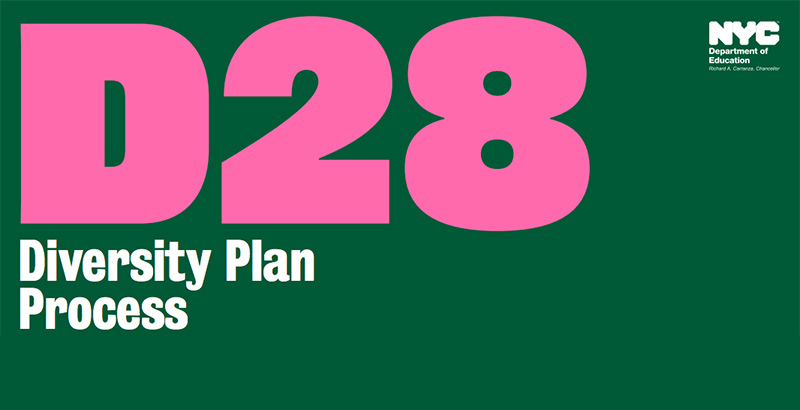 The New York City borough of Queens was declared the most racially and ethnically diverse of all large counties — those with over 1 million residents — in the United States in 2019.

For example, the district’s top-ranked middle school (out of 13), Queens Gateway to Health Sciences Secondary School, with 25 percent black students, reports almost 90 percent of its population performing at grade level on state math and English Language Arts tests. Lowest-scoring Redwood Middle School, which is 65 percent black, posts 22 percent of students testing at grade level in English and only 14 percent in math.

The Department of Education has engaged the consulting firm WXY Studio, which advised Brooklyn’s District 15 on making admissions at all middle schools unscreened, to work with District 28 on its integration plan.

Community meetings have been contentious, with parents arguing loudly over diluting school quality, busing 11-year-olds for long distances and the implication that the only way for students in the southern sector to get a good education is to head north. (It’s interesting to note that the second-highest-performing middle school in the district, Young Women’s Leadership School, Queens, is 41 percent black, 39 percent Asian and only 3 percent white. Could it be that white students aren’t the magic cure-all they’ve been touted to be? That some schools can survive perfectly fine with just a sprinkling of them?)

To many parents, the DOE was making it quite clear that educational resources are limited. And that families would be expected to fight for them. In response to the intense pushback, the Community Education Council announced a delay in the public workshops scheduled to commence in January.

The issues they were meant to address, however, aren’t going anywhere.

Lorraine Reid, the PTA president of Redwood Middle School in Jamaica, recently wrote a desperate letter shared widely across District 28. She begged for help fixing the school’s auditorium lights, which were dark ahead of a student holiday show, and complained of roaches infesting the gym.

“Practically everything in the building that the students in ALL three schools use is broken, damaged or in disrepair with no signs of ever being repaired or replaced,” she wrote. “How can that be possible, while we sit here and discuss diversity?”…

Integration could be a way to address disparities in both resources and academic achievement: Studies that show that attending diverse schools can help boost learning for all kinds of students and provide more access to resources like qualified teachers, and well-maintained buildings.

Please correct me if I’m wrong, but this seems to suggest that things like qualified teachers and well-maintained buildings (i.e., working lights and a minimum of roaches) are the exclusive, God-given right of “rich” schools?

Even as Redwood was struggling to literally keep its lights on, NYC School Chancellor Richard Carranza was proudly posing for pictures at Millennium High School, one of those icky screened schools that he believes are immoral (now that his daughter has graduated from one). Millennium High School, in downtown Manhattan, is 32 percent white, with 1 percent of students English learners. In 2022, it will be getting a new gym, five new classrooms and upgraded security on an additional, 5,000-square-foot floor.

Talk about diversity … of buildings. Nobody wants diversity of school buildings. School buildings should be as similar as possible, especially when it comes to things like lights and pest control (not to mention gyms, classrooms and security).

As for teachers, 71 percent were rated “effective,” while 26 percent were rated “highly effective” in 2017 — yet there are still, at last count, 23 NYC schools, all located in high-poverty/minority neighborhoods, with at least one class where not so much as a single student passed the math or English tests. If 97 percent of NYC teachers are good, how can it be that you need to attend a “rich” school in order to get a “qualified” teacher?

Wouldn’t an easier and more cost-effective solution than busing children to schools far from home be to diversify the teachers by sending “highly effective” ones to schools that could use them most?

But, no, it seems the DOE has decided that there is only so much “good” education, as defined by facilities and staff, to go around.

Instead of rectifying that problem, which is unlikely to encounter opposition (have you seen any protests regarding better facilities and staff for all?), the DOE is dead-set on merely adjusting who gets access to the “good” schools.

This plan does bring up the question of what will happen at the previously “good” school when the families who made it “good” are moved elsewhere. The DOE is likely planning to cross that bridge when they come to it. (Despite his promise that he will take responsibility for all consequences of his directives, Carranza will be long out of office by the time any effects of his work are felt.)

In the meantime, I am left with the sinking fear that NYC has come to the conclusion that a “good” education is a zero-sum game. That if one child in one school gets a “good” education, another child in another school must forfeit it. And instead of working their hardest to ensure that every student can learn from qualified teachers in a non-crumbling building, their efforts will be limited to a rationing system.

Because infrastructure and teacher quality? Well, you can’t expect the Department of Education to do anything about that. That’s the parents’ job. (Hat tip: Elizabeth Warren.)