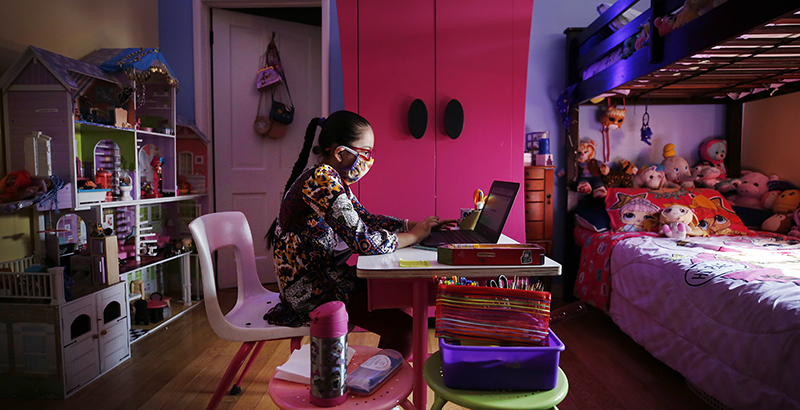 The Sunday of Thanksgiving, New York City Mayor Bill De Blasio unexpectedly held a press conference to announce the school reopening plan he’d promised the previous Wednesday but then said would be coming sometime in early December. (Got that?)

Hizzoner proclaimed that while middle and high schools would remain closed, elementary schools and District 75 programs for special needs students would open Dec. 7 and 10, respectively. What’s more, he promised that hybrid learning was being phased out, and those who had opted for in-person learning would soon be getting it five days a week.

Others were furious. As this dad wrote me:

This is absolutely outrageous. How can he possibly justify limiting 5-day a week in-person schooling only to those children whose parents had chosen the hybrid option when the choice was hybrid vs. fully remote. We chose to stay fully remote because the hybrid model was not worth the risk and the disruption just for 3 days of in-school learning every 2 weeks (which is what our school offered). If we had known the choice was 5 days per week in person learning vs. fully remote, we likely would have chosen differently. And I’m sure many parents are at the same point. Absolutely outrageous.

In the end, all were lied to.

1. Most schools will not go 5 days a week bc Staffing and space is not there.
2. Ppl also forget, that #1 heavily depends on HOW MANY FAMILIES R REMOTE in the school. So if you want your kids to go 5 days a week, ask more families to go remote. #thingsthemayorisntsaying https://t.co/Pm1RQx8Kk1

.@CannizzaroCSA skeptical most schools able to offer 5 days/wk in-person learning & "principals end up with the fallout…If they can’t do it they end up having to answer questions & people saying, ‘Well, why not? We were told that this would happen.’” https://t.co/7A3qtSZnvk

Within a few hours, the mayor was walking back his promise and The New York Times was changing its headline from “phase out” to “reduce” hybrid learning.

The simple fact of the matter is, the more students sign up for in-person learning, the fewer in-person days there will be. When pressed by reporters to name a single school that would be open for five days a week in person learning on Monday the 7th, De Blasio would only hedge that it was up to individual principals to figure out their own schedules — and budgets.

Based on the current opt-in numbers, even with De Blasio’s vague promises, two-thirds of all New York City students are still going to be learning remotely the majority of the time.

This is a problem. It’s a problem because the mayor’s and the school chancellor’s and the governor’s attention — and money — has been focused on reopening schools.

Very little attention — or money — has been focused on improving the remote instruction that affects many, many more kids in grades 3K through 12.

In August, teachers challenged Chancellor Richard Carranza’s narrative that they’d received “huge amounts” of professional development on how to optimize remote teaching. Some claimed they hadn’t gotten any.

In September, parents lamented the quality of remote instruction their children were receiving, which varied not only school to school, but grade to grade and teacher to teacher. (To keep dissatisfied parents from decamping to other schools, the Department of Education decreed that a bad education wasn’t a good enough reason to transfer. An interesting stance, considering that, at long last, many of the high-performing schools that the DOE had been trying to integrate by fiat now actually had the space for out-of-zone students and could have done so organically.)

In October, the DOE continued its grading policy from the spring. Teachers are not allowed to fail students. As a result, we have no idea how far behind our children may have fallen.

In Fairfax County, Virginia, reported the Washington Post, “the percentage of children earning at least two F’s rose by 83 percent this semester, with the largest increases observed among students with disabilities, English-language learners and Hispanic students…. Maryland’s largest school district… revealed that failing grades in math and English have increased as much as sixfold among Black and Hispanic students living at or near the poverty line.”

In Austin, Texas, reported the Texas Tribune, “almost 25% of students were failing at least one class, including 200 failing more than one subject.”

Is it unreasonable to extrapolate similar numbers for New York City?

Those who wanted a return to in-person instruction have gotten what they wanted. (Regular readers know that I’m a big believer in giving all parents what they want.)

So now, can we refocus our attention and resources to the remote learners? Can schools and teachers share best practices for what does and doesn’t work? Can they look to private schools and acknowledge that, despite what the teachers union claims, it is not impossible for the same teacher to instruct both in-person and remote learners at the same time?

And, oh, yeah: It’s been almost 10 months. Why are over 60,000 students, the majority of them low-income, still without learning devices?

We knew there were problems back in July, including confusion about who was responsible for delivery and payment, the DOE or the schools; devices being sent to families who didn’t request them; unclear instructions about how to return or repair a device; and multiple software issues.

The weather is getting colder, the infection rate is going up, and more and more families are going to choose to learn remotely.

The DOE simply has to do better.

And if it won’t, then we parents have to do our best to make up the deficit — for all children.

If you have a laptop, iPad or phone you can donate, please fill out this form to be matched with a family in need. Parents helping parents … if the government won’t.