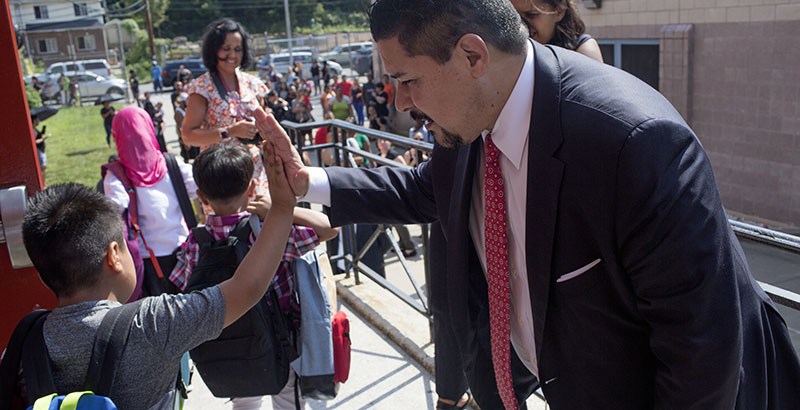 Last month, New York City Schools Chancellor Richard Carranza proclaimed that too many students were being labeled gifted and talented. Except he not only got the actual number of those who qualify for G&T programming wrong, he also displayed a rather scary lack of understanding about how statistics work. (Insert your own “he’s neither gifted nor talented” joke here.)

Carranza’s comments weren’t a surprise to those of us who’ve been following his rhetoric ever since the former head of schools in San Francisco and Houston assumed the top Department of Education spot in NYC almost exactly one year ago.

Carranza had barely unpacked his bags before announcing his plans to change admissions to New York City’s specialized high schools, expressing confusion as to why any family would opt for a screened school (despite his own daughter doing so in San Francisco). Then, after calling out a mother who objected to Manhattan’s District 3 setting aside 25 percent of seats in high-performing middle schools for kids who score either a 1 or a 2 on their state tests by suggesting she was specifically objecting to the presence of black students, he promptly turned his attention to elementary school gifted and talented programs.

Carranza told Chalkbeat: “We probably should be really clear about what we mean about truly gifted. The student that is doing algebra in the third grade, that’s a gifted kid.”

Earlier, a commentator took exception with one of my posts, 5 Secrets NYC Department of Ed Doesn’t Want Parents to Know About Gifted & Talented Programs. I had written about how even the top G&T programs weren’t all that accelerated. Citywide schools, which admit students from all five boroughs but accept only a fraction of those who score above the 97th percentile, and which teach NYC’s standard curriculum one year ahead, still only introduce algebra starting in middle school — whereas in Europe and Asia, all kids begin studying it around fourth grade.

The commentator countered: “In NYC we learned Algebra in 5th grade not 7th and I went to a regular non-gifted school. The kids I teach are in a regular public school and with Common Core now Algebra is being included in their 3rd grade math curriculum.”

I directed him to this post: I Thought I Was Taking Algebra but It Was Really Pre-Algebra.

But how hilarious would it be if NYC’s general ed curriculum did include algebra in third grade … but our own chancellor thought that was something only truly gifted kids could do?

Carranza also told Chalkbeat: “There is no body of knowledge that I know of that has pointed to the fact that you can give a test to a 4-year-old or a 5-year-old and determine if they’re gifted. Those tests — and it’s pretty clear — are more a measure of the privilege of a child’s home than true giftedness.”

Carranza is absolutely right. On the Upper West Side, the Upper East Side, and Brownstone Brooklyn, over 50 percent of students score in the top 10th percentile. Even those kids who score in the 99th percentile (placement in district gifted programs begins at the 90th) are merely bright children of college-educated parents who have been read to (and, quite often, prepped for the test).

But the chancellor is absolutely wrong when he assumes that the majority of NYC children in all neighborhoods couldn’t possibly do algebra in third grade.

The reason we need “gifted” programs in NYC schools is that our educational bar is set so ridiculously low. According to NPR, in some classes around the country, over 50 percent of pupils are performing above grade level.

Parents get their kids prepped for G&T testing, then fight tooth and nail to get them off waiting lists and into their first-choice schools, because G&T may not be all that — but it’s still better than the painfully dumbed-down general ed curriculum, which is literally years behind that of other countries.

I have three kids of my own. I understand that not all children can move through all subjects at the same pace (which puts me ahead of NYC’s gifted programs, which presume precisely that).

That’s why my modest proposal for improving schools, ending the de facto segregation of “good” and “bad” ones, and even solving the problem of fall babies being forced to start kindergarten before turning 5 years old, has always been to unshackle education from age and grade, and allow all kids to proceed at their own pace. It would even save the city money!

In my experience working with hundreds of families to help them find the best-fit schools for their children, I know that, save a few outliers, most parents don’t genuinely believe their kids are off-the-charts brilliant (the most advanced boy I ever worked with — doing algebra at age, not grade, 3 — had a mom who kept insisting he was average). They are merely unhappy with what’s available in a general ed classroom and see G&T as their one shot at getting something a tiny bit better.

But what if we could do a lot better? For all kids?

What if Richard Carranza is wrong even as he’s right?

What if we improved the quality of education for all children, not by a little, but by a whole, whole lot?

Alina Adams is a New York Times best-selling romance and mystery writer, the author of Getting Into NYC Kindergarten and Getting Into NYC High School, a blogger at New York School Talk and mother of three. She believes you can’t have true school choice until all parents know all their school choices — and how to get them. Visit her website, www.NYCSchoolSecrets.com. A version of this essay appeared on the New York School Talk blog.