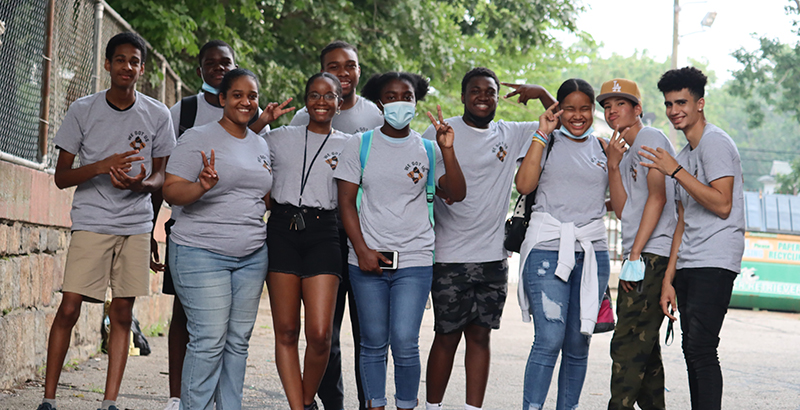 When coronavirus vaccines first became available to the public, Ira Habiba, 16, knew some immigrant communities might have difficulty accessing quality information about the safety and efficacy of the shots.

She herself moved to the United States from Bangladesh with her family when she was 5, and still remembers the feeling of struggling to communicate with her classmates in the years following. Many non-English speakers, the Quincy, Massachusetts high school junior feared, might miss out on potentially life-saving facts about the virus and immunizations.

“There’s that whole language barrier that makes it a lot more difficult to communicate and share accurate information,” she told The 74. “It also does cause a lot of [vaccine] hesitancy.”

Wanting to do her part to combat the problem, the teen in March signed on as a youth leader with the We Got Us Project, a Boston-based team of high school, undergraduate and medical students of color working to provide information about coronavirus immunizations to the area’s Black and immigrant communities.

Now, she leads online seminars — called “empowerment sessions” — that address some of the most commonly held misconceptions about the COVID shots. The sessions not only provide facts about the vaccine, but also speak to histories of medical racism, such as the infamous Tuskegee study of untreated syphilis where nearly 400 Black men were denied necessary medication for decades under the guise of free health care.

Including information on such egregious historical events allows presenters to acknowledge the reasons that undergird many Black, Indigenous, Asian and Hispanic residents’ reservations about the vaccine, said the group’s director of youth programming, Laetitia Pierre-Louis.

“We make sure that we have just these raw conversations about, you know, medical racism and what happened in the past and is still, unfortunately, happening today,” she told The 74.

Amid a pandemic that at every turn has taken a disproportionate toll on people of color, killing Black Americans at nearly twice the rate of white Americans, the We Got Us Project conveys reputable information on the virus to Boston’s most vulnerable communities from voices they can trust, its leaders say.

It’s the group’s makeup as primarily Black, Hispanic and immigrant youth that helps their message resonate for many residents, said Pierre-Louis, who is also a fourth-year premedical student at Northeastern University.

“I think it’s incredibly important who tells you about the information [on the vaccine],” she said, explaining that her Haitian lineage and ability to speak French have often made her conversations with people of that background easier.

“Having somebody who speaks with them in their own language, who understands their cultural background … and really understands what they mean when they share out their concerns about the vaccine definitely makes a large difference.”

Especially in discussions with young people, said Habiba, it helps to have a peer deliver facts about the vaccine.

“A lot of times, the things that adults can say to us seem more patronizing … like the way a parent would tell a child to do their chores,” she explained. “Coming from another person your own age, it kind of signifies the importance of it.”

We Got Us — founded in March 2021 by LaShyra “Lash” Nolan, the first Black woman to serve as student council president at Harvard Medical School — has so far presented to over 400 youth and adults. They’ve run sessions for groups from schools designed to serve immigrant students like the Boston International Newcomers Academy and nonprofits like the Interfaith Youth Core.

The team has also run door-knocking campaigns and held numerous community events. Most recently, in the primarily Black neighborhood of Roxbury, they ran a Nov. 30 session in collaboration with the Boston Children’s Hospital for youth to discuss the vaccine and receive shots.

Through its canvassing efforts, the organization has reached over 2,700 individuals, creating and distributing more than 1,500 mask and sanitizer kits and scheduling 97 vaccine appointments, Research Director Melissa Jones, an undergraduate student at Harvard University, told The 74. More than half of participants in empowerment sessions said on exit surveys that if the COVID-19 vaccine were offered to them, they would “definitely” take it.

Additionally, the youth-led organization has twice presented to members of the Massachusetts Department of Public Health to inform the agency’s approach to helping marginalized communities access vaccines.

Massachusetts has a higher-than-average overall share of Black, Hispanic and Asian residents immunized against the coronavirus compared to the rest of the U.S., according to numbers published Dec. 2 by the Kaiser Family Foundation. But gaps still remain: The Black vaccination rate (72 percent) lags behind the white rate (81 percent) by nine points, a wider margin than the national average. Numbers published by the state indicate a slightly larger 10 percentage point gap.

Though the Massachusetts Department of Public Health does not disaggregate youth vaccination data by race, numbers published in late November by the Massachusetts-based Vaccine Equity Now! Coalition show that communities in the state with higher shares of economically and socially vulnerable households tend to have lower COVID immunization rates among 12- to 17-year olds than locales with fewer vulnerable residents.

Across the country, racial disparities in youth vaccination worry officials. In five core counties in the San Francisco area, for example, 52 percent of Black students were immunized as of early November, compared to 85 percent of students overall — prompting fears that looming student vaccine mandates imposed by local school districts may have a racially exclusionary effect.

Those disparities underscore, in the eyes of We Got Us members, the pressing nature of their work. Still, when speaking to people who have their doubts about the vaccine, the group’s motto is to “convey, not convince,” Pierre-Louis explained.

Not as a participant but as a youth member, Habiba herself has felt invigorated by what she’s learned. Training to lead sessions for peers, she was introduced to information that school had never taught her, such as disparities in health care and the historical events that explain some residents’ current day distrust of the medical establishment.

“Once you start to connect those dots, it’s really eye-opening,” said the high schooler, who is considering studying epidemiology in college.

But every time she logs into a session with the We Got Us Project to promote vaccine equity, Habiba believes she’s working to combat those systemic problems.

“It definitely does feel like one small step,” she said.

Pierre-Louis is similarly gratified. She’s so passionate about her responsibilities with the organization, she said, that it “doesn’t really feel like work” despite having to squeeze in training sessions between her undergraduate courses and studying for the MCAT exam.

For her, the ultimate purpose of the project is about hearing and elevating the perspectives of marginalized communities amid a life-threatening pandemic.

It’s how she understands the name itself, We Got Us.

“It really means we’re here for you,” said the college senior. “We’re here to fight for you. We’re going to listen to you. And we’re really here to make sure that your voices are heard.”