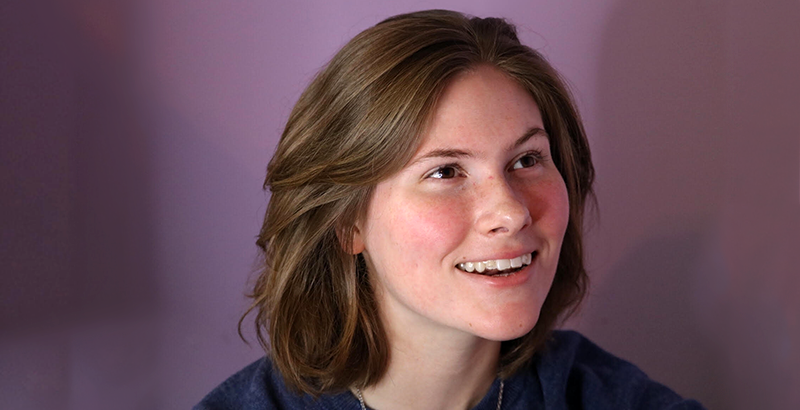 This conversation is the latest in our ongoing series of in-depth 74 Interviews (scan our full archive). Other notable recent interviews: Dallas Superintendent Michael Hinojosa on mask and vaccine mandates; Mary Beth Tinker on her activism that spurred a 1969 Supreme Court case to preserve students’ freedom of speech rights; and Generation Citizen CEO Elizabeth Clay Roy on why action-based civics education is patriotic.

Since Sept. 1, the country’s most restrictive ban on abortion has prevented Texans from accessing care if their pregnancy is beyond six weeks.

Two weeks after the law’s signing, then-high school senior Paxton Smith went viral for swapping her pre-approved valedictorian address to speak out against the legislation in her home state.

Since giving the speech, Smith says her life has taken a “massive shift.” Now a freshman at the University of Texas at Austin, she balances full-time school with beginning a music career and expanding her activism.

Smith is leading A War on My Body; A War on My Rights, a collaborative book featuring contributors across generations, from medical professionals to reproductive rights activists and prominent women’s rights attorneys Gloria Allred and Judie Saunders. The book’s title references the opening line of her valedictory address.

The larger aim, Smith said, is to highlight the abortion perspectives that are often ignored, including racial discrimination in accessing care and the experiences of minors and gender queer individuals facing pregnancy.

Her activist work, it seems, is just beginning. Smith also serves on advisory boards for two nonprofits: A is For, which uses art and storytelling to end abortion stigmas and shame, and the Women’s Reproductive Rights Assistance Project, which helps individuals access safe abortions and contraceptives across the country. And on Sept. 30, she delivered another speech at Variety’s Power of Women event, ending with a call to action:

It’s unclear when Smith and others Texans will regain access to legal abortions. Though a federal judge in Austin last week declared the law cannot be enforced, his ruling will be appealed to the conservative Fifth Circuit. The Supreme Court did not delay or prevent the law from taking effect, refusing to act on an emergency appeal made by abortion providers in early September. Efforts to codify abortion access through federal law will likely not pass the Senate.

President Biden has openly critiqued the Texas ban, issuing a statement that it “will significantly impair women’s access to the health care they need, particularly for communities of color and individuals with low incomes.”

Health care providers, lawyers and activists await December 1, when the Supreme Court will hear a Mississippi case challenging the state’s ban on most abortions after 15 weeks. Their decision may upend or solidify Roe v. Wade’s protection of the right to choose prior to “viability,” typically around 24 weeks.

The 74 spoke with Paxton Smith to get a pulse on how she feels given federal moves and why she’s decided to continue her activism through the collaborative book.

This conversation has been lightly edited for length and clarity.

What spurred your personal activism — was it in any way connected to or motivated by your education experiences?

My personal activism really sparked with the speech. In giving the speech, really what I wanted was for people to understand how it felt, what it really meant for a piece of legislation like this to go into effect and understand that having a pregnancy can have life-changing effects. Nobody else should have the right to make that life-changing decision than me. I am the person that’s going to live that future and I should be the one making those decisions. I wanted people to understand … what it felt like for the decision to be taken out of my hands and put into the hands of a stranger.

I know you’ve mentioned before that your family has often had open conversations on politics and other controversial issues at home even though you sometimes disagree — did you have that openness to talk and explore these issues during the school day as well?

Sometimes. I think in high school, a lot of times you find a niche group, where they carry a lot of the same perspectives, the same ideas. I didn’t necessarily have the exact same opportunity at school, where people might have had very different opinions than I do. But we definitely did have conversations about politics and things surrounding general human rights.

Why did you decide to continue your activism through a bigger project? How did you choose a collaborative book, and what impact do you hope that model of storytelling might have?

The reason it’s a collaborative book is really to better accomplish that goal, of telling those stories and different perspectives. If I wrote this book alone it would come from an 18- year-old, white, upper middle-class cisgendered girl. It would continue the problem of people’s voices not being listened to, and that’s not what I wanted.

What stories or issues stuck with you after submitting the first draft of the book?

I can’t really speak to the stories in the book as of right now. But I receive hundreds of messages from people, and a lot of times people share their stories surrounding abortion. Some of the biggest things that stuck with me are the stories of what took place before Roe v. Wade, when abortion was still illegal, and people had to take medical care into their own hands.

They were getting these back-alley, unsafe abortions and thousands of people ended up dying. Thousands of people ended up in emergency rooms. And thousands ended up with severe, life-long injuries. Just hearing these stories — firsthand accounts of people in emergency rooms and doctors saying they are not willing to help because they’re scared of the legal implications, or hearing the stories of people who lost their mothers to unsafe abortions — those really stick with me and motivate what I can try to do.

How did you learn about the Afiya Center and choose it as the place to direct proceeds?

I actually heard about the Afiya Center at a rally in Austin, Texas, that was organized by a 12-year-old reproductive rights activist. Ultimately we chose them because they address the racial disparities in accessing reproductive health care. It’s incredibly important to be able to open up access to more than just white people, because everyone deserves reproductive rights and access to care.

Do you see a future for yourself in education or politics? If not those fields in particular, what are you hoping to do in the future?

I’m actually hoping to become a musical performing artist. I make pop and pop-alternative music. I mostly do it alone. I played trumpet for about eight years and am pretty novice at piano and guitar. My main thing is music production.

Right now, I’m working on putting together a first album. I’m sending out some music to people to see what they think. It’s very much in the early stages but I’m excited to pursue music as a career. That has been my dream since I was a child and I have been so involved with music my entire life.

Why did you choose to stay in Texas and attend UT Austin?

I chose UT Austin mostly because of the music scene. There’s a lot of music downtown so I’m hoping to do some live gigs once or twice a week. My life has taken a massive shift with the speech and the activism takes up a lot of time.

What are your songs about? Do you imagine incorporating your activism into your lyrics and songwriting?

I think there’s definitely room to incorporate activism in songwriting. Generally, I write music about what I’m experiencing, thinking and feeling. My life is what runs through the core of all my music, so naturally some of it will be charged with my activism.

I wonder if we could reflect briefly about what’s happening at the federal level. SCOTUS refused to block Texas’s law and the House passed the Women’s Health Protection Act, an attempt to codify the rights established with Roe, though it’s unlikely to pass the Senate. The Department of Justice is also suing your home state, but that hasn’t reopened access. How are you feeling in light of these moves? How do you hope your peers might push for reproductive rights at this moment?

I’m feeling very hopeful. Really right now there’s a lot of things up in the air and it’s kind of hard to tell where things will land. I’m hoping that my peers continue to do what they’re doing now, which is putting pressure on legislators, bringing attention to the topic and all in all, making it extremely clear that they believe that abortion is a human right.

A War on My Body; A War on My Rights will be released Jan. 22, 2022, the 49th anniversary of the Roe v. Wade decision, by Di Angelo Publications, a small press in Houston. All proceeds will be donated to The Afiya Center, a reproductive justice organization run by and for Black women and girls to transform relationships to sexual and reproductive health. The center educates and provides resources to break down racial inequities, decreasing maternal death and HIV rates.