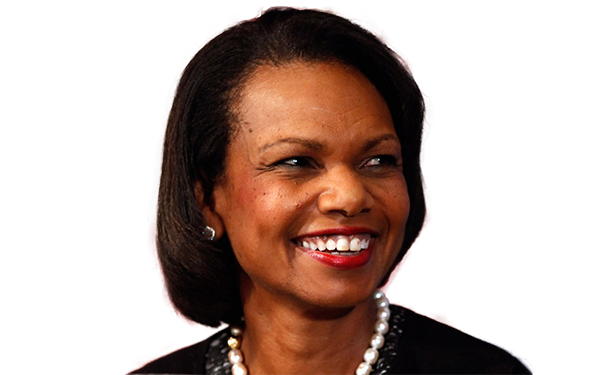 Condoleezza Rice is best known for serving as national security advisor and then secretary of state for President George W. Bush, but she was an academic — a Stanford political scientist and provost of the university — before her years of public service, and she later returned to Stanford.

She has long focused on how to improve learning, and she advocates for strong standards, school choice and building a culture of high expectations for both students and teachers — all of them essential, she believes, to ensuring that Americans can rise from impoverished beginnings through hard work and a good education.

Erosion of that belief was evident in this year’s election, she told The 74.

“That sense that we can do anything has been what holds us together. I think what may be breaking us apart is lack of confidence about whether that narrative is actually any longer available to most people,” she said. “At the core of that is education. If I can look at your ZIP code and I can tell whether you’re going to get a good education, I really can’t say it doesn’t matter where you came from.”

Rice served as chair of the Foundation for Excellence in Education’s board of directors from January 2015 through May 2016. She spoke with The 74 at the foundation’s annual conference in Washington, D.C., last month. The interview has been lightly edited for length.

The 74: Jeb Bush spoke earlier today about what he’d like to see happen at the federal level under unified Republican control. What would you like to see?

For instance, parental choice. I think nothing would transform the educational system more than for every child to have the funding, the opportunity, to go to a school and in circumstances that are best going to educate them. So I would hope there would be support for that — not just on the Republican side of the aisle, but some Democrats I know are education reformers, too.

I think the important thing to remember about the United States is, we’re not held together by ethnicity, blood, nationality, religion, so our ability to hold ourselves together is somewhat fragile. What has held us together is this aspiration, this belief that you can come from humble circumstances [and] you can do great things. And it’s been true. We have so many stories, and we all know the stories, and in our own families there are these narratives of people who started with nothing and ended up at the very top.

That sense that we can do anything has been what holds us together. I think what may be breaking us apart is lack of confidence about whether that narrative is actually any longer available to most people. At the core of that is education. If I can look at your ZIP code and I can tell whether you’re going to get a good education, I really can’t say it doesn’t matter where you came from.

The reason Joel and I did that report is, we see, and I see, education at the core of national unity, at the core of the fabric of America. There are lots of reasons that it’s important to national security. You want to have competitiveness internationally, and if you don’t train people for the jobs of the technologically sophisticated future, you’re not going to compete. You want to be able to have educated people in the military and serving in government. Today, when so many people can’t even pass the basic skills test to get into the military, that’s a real red flag. But I think the most important thing is that our social fabric is really held together by this aspiration, and education is so much at the core of that.

Today, four years after the report, do you think people see education as a national security issue?

If you talk to most Americans … they might not use the term “national security,” but they will see it as a high priority for a society that’s just. I’ve also called it the great civil rights issue of our time because it is for me at the core of a just society, that you’re not born into circumstances and you have to stay there because you can’t get a high-quality education. Yes, I think it’s a national security priority, but I think most people also see it as an issue of justice.

You, among other prominent Republicans, criticized President-elect Donald Trump over the course of the campaign. Now that he’s president, what are you looking for him to say on education or other issues to try to heal the divisions that emerged during the election?

He’s going to be president of the United States. He’s my president. I want him to have the most successful, transformative presidency of my memory. I’m committed to trying to help in any way that I can to see that happen.

I also think that the president-elect really tapped into something in the country that we need to pay attention to. There are too many people who have been left behind, who don’t feel that they have prospects in this globalizing, fast-changing, technologically sophisticated world, and so refocusing on human potential development, job skills training, making sure that when somebody gets a high school degree [and] they’re not going to go on to college, that it’s a high school degree that can land them in a job. If they are going to go on to college, maybe it’s two years with a community college that will both educate and credential. We have to do something about the job-skills mismatch that we have in the country.

I think there’s a huge agenda here for what I’ll just call a development of human potential. I think this is an administration that has really exposed the problem and I think has a finger on the pulse of some of the possible solutions.

One part of that preparation for college and career is standards. You supported the Common Core, but it’s facing increasing opposition nationally and in particular with Republicans. What should be done to fix that — a rebranding, a total do-over?

… The basic idea is, children in Alabama, Texas, California and New Hampshire ought to have essentially the same level of knowledge and skill at a similar grade level. Given the mobility of the labor force in the United States, that makes perfectly good sense. But somehow … as it started to be implemented, I think it ran afoul of the sense of local control of education.

I never really believe in rebranding, because that means, well, you just didn’t understand us the first time. What I believe in is, let’s look at what the basic idea was: The basic idea is, how do you make sure across the nation everybody has the same level of knowledge, skills, at a comparable period of time, that all third-graders can do the same math, that all ninth-graders can read at the same level. That all makes sense.

Do you have any proposals for what that delivery vehicle would be?

No. I’m an educational reformer because I’ve watched too many kids, in places where I live in California, right across the railroad track, not graduate. [There are less than] 70 percent graduation rates in high schools about a mile and a half from Stanford. I find that highly unacceptable.

My bailiwick is higher ed. I’m a professor, I was the provost of Stanford, and I know that I want to be able still to look out at my classes at Stanford and say there’s a first-generation kid who is the first in their family to go to college, and next to them is a fourth-generation Stanford legatee. When they leave, all that’s going to matter is they have that college degree.

What’s at stake for higher education is that increasingly that pool of people for that first-generation seat at Stanford or Harvard or Virginia or wherever isn’t going to be filled because the K-12 system is going to fail those kids when they’re in third grade and they’re not going to read, and then they have no chance of making it into that first-generation seat. That’s how I see the link between what we need to do in K-12 and getting kids to their highest levels of achievement.

I think the one thing that I’ve learned in large part by my relationship to this organization, Excel in Education, is that the states are tremendous both [as] laboratories and ultimately delivery vehicles for education reform. Because as much as I want the kid in Alabama and Texas and California and New Hampshire to know the same things, those circumstances are very different in those places, and the state legislature, the state governor, the local communities are closer to how to think about achieving that goal than Washington.

State and local leaders will have a much greater deal of control over education decisions under the Every Student Succeeds Act. What advice would you give governors or other local leaders?

First thing is, believe that every child can learn and have high standards for all of them. President Bush, one of the first times I heard him speak and became really devoted to him, didn’t have to do with foreign policy. I heard him talk about the soft bigotry of low expectations. If you have low expectations for kids, even my kids at Stanford, they will live down to them. So first of all, have high expectations.

Finally, give parents a choice. Right now, if I am of means and I have a kid, I will move to a school district where the schools are good. That will be Palo Alto [California] or Fairfax County [Virginia] or Hoover, Alabama, near where my relatives live, and the public schools will be really good. If I’m really wealthy maybe I’ll send my kids to private school. So who’s stuck in failing neighborhood schools? Poor kids. That’s the height of inequality. Give the parent of that child the same ability, whether it’s a charter school or inter-district mobility or whether it is a voucher, to put that child in a place where he or she is going to succeed.

Oh, and by the way, give them the chance to do something in the arts. I’m all for STEM education — it’s really important, science and technology and math — but the arts sometimes open up children’s minds and their horizons and their confidence in a way that nothing else does.