The Civil Rights Act of 1964 set out what seemed at the time to be a straightforward, albeit ambitious, task: to survey and document “the lack of availability of equal educational opportunity for individuals by reason of race, color, religion or national origin in public institutions.”
But the study’s results — released in 1966 and officially titled Equality of Educational Opportunity but known colloquially as the Coleman Report — sent shockwaves through the educational and political establishment.
Today, 50 years later, the ripple effects continue to be felt.
In fact, a series of studies examining the report’s legacy as well as educational progress over the past 50 years was released earlier this month at a conference held at Johns Hopkins University, where Coleman had been a sociology professor. The topics were far-ranging: segregation, school spending, accountability, parental involvement, stereotype threat and technology. An issue of the journal Education Next earlier this year raised some of the same issues.
One theme seemed to emerge: Newer research has led to a better understanding of the points made by the Coleman Report, but progress has often been disappointing in addressing many of the problems — including segregation, poverty and the achievement gap — related to educational inequity.
Secretary of Education John King, speaking at the Hopkins event, echoed aspects of this theme and called for a commitment to using evidence and a multi-pronged strategy for improving student outcomes.
Coleman’s findings spark surprise
Prior to the Coleman Report, the conventional wisdom, according to a review by Karl Alexander and Stephen Morgan of Johns Hopkins University, was that poor educational outcomes could be chalked up to mediocre schools and their lack of such resources as “modern science laboratories, a well-stocked school library and highly qualified teachers.”
In fact, however, the several-hundred-page report found that differences in student test performance varied much more within a single school than between schools — if kids in the same school got wildly divergent results, that meant academic performance couldn’t be attributed solely, or even largely, to the quality of the school.
“It is known that socioeconomic factors bear a strong relation to academic achievement,” the Coleman Report says. “When these factors are statistically controlled, however, it appears that differences between schools account for only a small fraction of difference in pupil achievement.”
The research also found that variations in spending among schools didn’t seem to explain differences in performance.
Instead, as Alexander and Morgan put it in describing the report’s finding, “family background factors afforded a much more powerful accounting of achievement differences than did any and all characteristics of the schools that children attended.”
The Coleman Report did note that schools were heavily segregated but found that poor students seemed to do better when attending classes with less disadvantaged peers. “It appears that a pupil’s achievement is strongly related to the educational backgrounds and aspirations of the other students in the school,” said the original report.

(Source: The Coleman Report)
The shorthand summary — papering over a great deal of nuance in the report — became that families and segregation matter, but schools and money don’t.
Segregation and achievement gaps persist
“Today, much has changed, but much also has yet to change,” Alexander and Morgan wrote. Indeed, the bleak picture of inequality in educational outcomes that Coleman identified remains an enduring part of American life.
Stanford economist Eric Hanushek has pointed out that outside the South, achievement gaps in 12th grade are only marginally lower than they were in 1965. 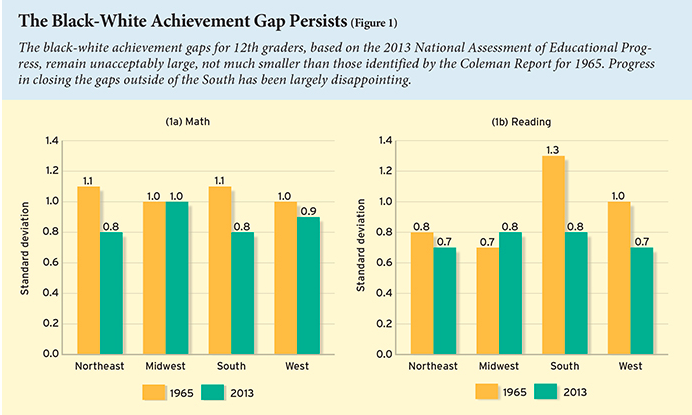 (Source: Education Next)
(The good news is that students of all races have generally made meaningful progress on fourth- and eighth-grade national exams, though achievement has been fairly stagnant among high school students.)
Additionally, the deep racial segregation identified by Coleman has either gotten worse or only marginally better, depending on how it’s measured. And schools have become more and more segregated by socioeconomic status. 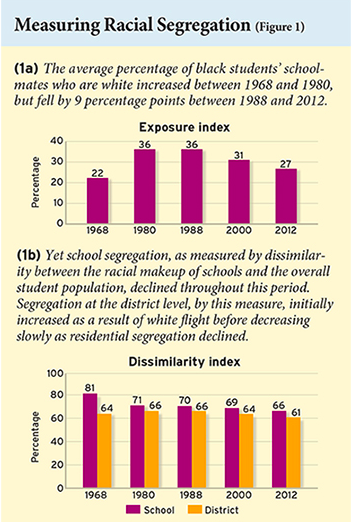 (Source: Education Next)
In a new paper for the Hopkins conference, Stanford sociologist Sean Reardon argued that the deleterious effects of segregation — found both today and in the Coleman Report — are caused by the concentration of students in poverty: “The results … are unequivocal. Racial segregation is strongly associated with racial achievement gaps, and the racial difference in the proportion of students’ schoolmates who are poor is the key dimension of segregation driving this association.”
An evolving understanding of the importance of teachers and money
Fifty years later, research techniques have advanced and new studies have accumulated. But the Coleman Report stands the test of time in several regards. For one, factors beyond schools’ control swamp school quality in predicting student achievement, as the report argued.
Precise estimates vary, but a reasonable ballpark number is that 20 percent of the variation in student outcomes is due to school effectiveness, with most of the rest explained by family and student characteristics.
But within that 20 percent, what explains why some schools are better than others? Although it didn’t get much attention at the time, the Coleman Report actually identified a possible answer: “the quality of teachers shows a stronger relationship [than school facilities and curricula] to pupil achievement. … Teacher quality seems more important to minority achievement than to that of the majority.”
More recent research backs up this view, argued University of Washington professor Dan Goldhaber in a retrospective about the report for Education Next: “New empirical work, using better data … and more sophisticated statistical techniques has, in broad terms, reinforced the Coleman Report conclusion that teacher quality is the most important schooling variable.”
This aligns with Coleman’s finding that student achievement seemed to vary mostly within, rather than between, schools, since teacher quality also appears to differ most within, rather than between, schools.
When it comes to money, policymakers and some researchers continue to debate the extent to which school spending results in improved outcomes. A new study, by Stephen Morgan and Sol Bee Jung of Johns Hopkins, found only a small correlation between school resources and student outcomes, seeming to confirm Coleman’s results.
But other national research that tries to isolate the impact of additional spending shows that more money does seem to help students. Three separate studies have found that court-ordered infusions of cash led to improvements in students’ test scores, high school graduation rates or long-term outcomes like college attendance and adult earnings. Local studies of school funding in Michigan, Ohio and Massachusetts have shown similarly positive results. Still other research has found that the benefits of school integration came about largely because more resources were directed to black students as a result.
Nevertheless, an impossible-to-prove dichotomy between spending more money and spending it wisely has taken hold among many policymakers and even some scholars. This is odd framing, since more money cannot be spent wisely if there is none to spend.
In short, the Coleman Report may have been limited by the research methods available at the time; although there may not be a correlation between spending and outcomes, careful research on cause and effect shows that money does matter.
John King embraces broad agenda for addressing inequality
Speaking at the Hopkins conference, Secretary of Education John King emphasized multiple approaches for addressing educational inequality.
King agreed with the report’s finding that family background matters, but he argued that schools do, too: “Unfortunately, [the report’s] 700-plus pages was reduced … stripped of nuance and used by some to argue that schools don’t matter, that the only thing that matters is poverty and students’ demographics.”
But, King continued, “There are others who make a differently naive argument: that school is all that matters, that we can ignore the factors in students’ lives outside of school and still expect to close achievement gaps.”
He rejected both views: “Clearly, neither of those two views is supported by the evidence.”
King praised several policy interventions that he said were backed by evidence: small schools in New York City, charter schools in Boston, resource equity, “high-quality” early childhood education, improved teacher collaboration and creation of career ladders, wrap-around services and school diversity.
King noted, though, that charter school quality varies by context: “We know that charters are not uniformly good, that charter authorizing matters a lot.” In a previous interview with Chalkbeat Detroit, King argued that charter authorizing is particularly problematic in Michigan.
King, who founded a charter school in Boston, did not mention Massachusetts’s pending ballot initiative on charter school expansion. A spokesperson for the Department of Education previously told The 74 that King does not plan to take a position on that specific ballot question.
On school integration, an issue King has long championed, he said, “We are not as far as even the authors of the Coleman Report would have expected, 50 years later.”
King and the department have backed a number of small-scale programs to encourage diverse schools, including through charter schools, magnet schools and innovation grants. He has also advocated publicly for more diverse schools, and the Obama administration proposed a budget item to advance integration, though it was not funded by Congress.
Some have questioned whether voluntary integration programs can ever lead to meaningful school desegregation, since research shows that some school choice programs have exacerbated, rather than ameliorated, segregation. “Many experts and advocates fear that while integration programs based on choice are necessary — anything that doesn’t give parents a choice is doomed to fail — they also have clear limits. That’s the narrow path any successful integration policy will have to navigate,” Alia Wong recently wrote in The Atlantic.
King closed his speech by emphasizing the importance of research and its role in helping policymakers learn what is — and isn’t — effective, and by highlighting the Coleman Report’s role in sparking increasingly advanced research.
“At the end of the day, one of the most important things we can do is to keep learning about what works,” King said.