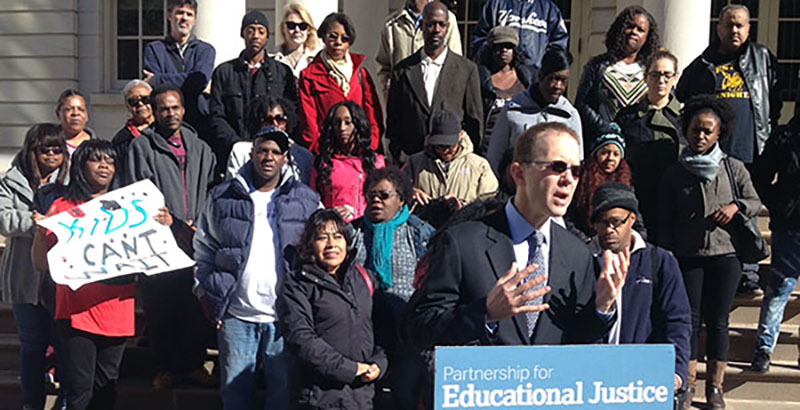 A lawsuit that could have huge ramifications for teacher job protections in New York will make its way back to the courtroom Thursday, when a judge with the state Supreme Court’s Appellate Division in Brooklyn is scheduled to hear oral arguments on whether the case should move forward.

Nine parent plaintiffs filed the lawsuit, Wright v. New York, against the state in 2014. The lawsuit was bankrolled by the national education reform nonprofit The Partnership for Educational Justice.

Here are three things to know ahead of Thursday’s oral arguments:

The lawsuit takes aim at teacher seniority and tenure protections, charging that “last in, first out” rules governing layoffs and other aspects of tenure impinge on students’ constitutional right to a “sound basic education” by keeping “chronically ineffective teachers” in classrooms.

Among the parent plaintiffs is Tauana Goins, whose daughter’s teacher at P.S. 106 allegedly bullied the girl and called her “a loser.” Goins told The 74 she believes tenure should be based on performance rather than seniority.

On its website, PEJ contends that New York’s tenure laws amount to lifetime job protections that are so extensive, “schools have to navigate a nearly endless bureaucratic maze to replace even the worst-performing teachers.”

2 The case has spanned years

The case began in 2014 with two separate lawsuits against the state Education Department challenging teacher seniority protections. Those lawsuits were merged, and PEJ argues that tenure protections “grant lifetime job protection to 99% of all teachers, mandate quality-blind teacher layoffs, and require overly expensive and lengthy bureaucratic processes to replace teachers who are ineffective or harmful.”

The lawsuit was inspired by a brief victory in the high-profile Vergara v. California case, filed in 2012, which alleged that job protections in that state kept “grossly ineffective” teachers on the job in violation of the Constitution’s equal protection clause. A 2014 ruling for the plaintiffs was struck down by a California Court of Appeals panel two years later, and the state Supreme Court declined to hear the case.

Plaintiffs in the New York case have been handed two minor victories, most recently in 2015, when a state judge denied a request from unions and education officials to dismiss the lawsuit. New tenure rules approved by the state legislature, the defendants had contended, effectively voided the plaintiffs’ argument, and so changes to teacher tenure rules rest in the hands of legislators, not judges. Earlier that year, New York lawmakers had approved rules that required schools to overhaul their evaluation systems to better track teacher quality. That change lengthened tenure eligibility requirements to four years and established a model for reviving poor-performing schools. However, state Supreme Court Justice Philip Minardo ruled the new education laws did not alter teacher protection rules enough to render the plaintiffs’ complaint moot.

3 The New York case is one in a series

PEJ is also seeking in court changes to teacher protections in Minnesota and New Jersey.

In the New Jersey lawsuit, HG v. Harrington, six plaintiff parents argue that “last in, first out” rules prevent children in low-income school districts from receiving a “thorough and efficient education.” In May, New Jersey Superior Court Judge Mary Jacobson threw out the case, contending the plaintiffs had failed to show how their children were harmed by the rules.

“I don’t see any link other than speculation and conjecture between the LIFO statute and the denial of a thorough and efficient education to these 12 children,” Jacobson said at the time.

The parents have since appealed that decision.

A PEJ-backed lawsuit filed in 2016, Forslund v. Minnesota, argues that state laws unduly protect “chronically ineffective” teachers. And though the state Court of Appeals previously ruled teacher tenure decisions are up to the state legislature, and not courts, the Minnesota Supreme Court agreed to take up the case earlier this month.

Disclaimer: The 74 co-founder and board member Campbell Brown founded the Partnership for Educational Justice.