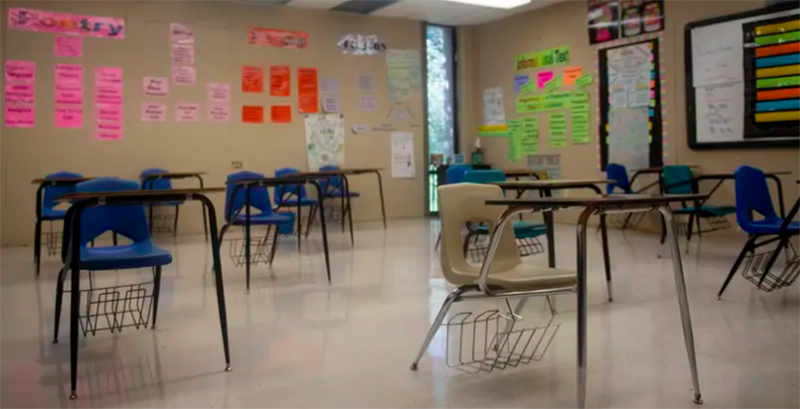 Desks are set up six feet away from each other at Premont Collegiate High School on Monday in Premont. (Allie Goulding/The Texas Tribune)

This analysis is published in partnership with TexasTribune.org.

During a pandemic, an economic recession and public protests against racial injustice and police violence, it’s hard to say what Texas voters will be thinking about in this year’s election. Here’s a candidate: reopening schools.

Public schools in Texas are getting ready to open. That might be the most important thing on the Texas political calendar this year.

In some districts, like Collin County’s Celina ISD, high school football players have already reported for the annual agony of August two-a-day workouts. Classes there and in some other districts start in a couple of weeks. Like other districts, they’ve tried to adjust to the pandemic. Parents can opt for virtual instruction if they’d rather not have their kids in schoolhouses. (Not every class will be offered virtually. One listed exception on Celina ISD’s website is welding, which ought to be a relief to the fire department.)

Elsewhere, plans for opening are more cautious. In the Fort Worth ISD and Hays CISD, for instance, virtual and in-person classes — parents’ choice — won’t start until after Labor Day.

Other districts are considering similar postponements, as they work on their preparations for online and in-person learning with a contagious disease in the air.

The results of this statewide lab experiment with 5.5 million student subjects will come in quickly, as Texas educators and parents find out what’s safe for the kids they’re trying to educate during a pandemic.

Everybody wants it to work. If there is a reasonably safe way to put kids back in classes without risking their health or the health of families and school workers, it would be a huge break after the first discouraging months of the coronavirus.

It would be good for the students. It would free parents who have been unable to return to their workplaces because their kids have been at home. It would mark a big step in the direction of whatever is going to be normal after all of this.

And it would be a significant victory for politicians who have been responding to the pandemic and the recession — especially the ones on the November ballot.

The timing has put those candidates — incumbents, challengers and those seeking open seats — in the spotlight.

They’ll be judged, in part, by what happens to those students. And it will happen — good news, bad news or no news at all — as more voters turn their attention to the elections, the candidates and the issues.

The experience in schools will be a proxy for the coronavirus, the most tangible evidence yet of the national, state and local government responses to the pandemic.

It’s a variation on what happens when the economy is suffering, when people “vote their wallets.” Personal experience can trump ideology, party and other issues. Voters looking for change — in an economy, in a response to a pandemic, whatever — can be hard on incumbents or anyone they see as an obstacle to relief.

Safely getting Texas students back to school — virtually or actually — could be the best evidence between now and the election that official responses to the pandemic are working. There are other ways to measure the COVID-19 responses, if they appear in that same time frame, like development of a vaccine, or big drops in the alarming numbers of cases, hospitalizations and deaths.

Those might happen. Public education will be in the mix no matter what. The schools open or they don’t. They stay open or they don’t. They’re safe or they’re not. Online learning is effective or disappointing, as is in-person learning in this environment. So many complications will affect public perception of what happens in the schools: education, health, transportation, food services, janitorial services, policing and so on.

It’s not just the kids. Public education is the largest employer in many Texas communities. Its biggest single source of funding is local property taxes, a singularly unpopular and politically charged way to raise money.

The obstacles to success are numerous. And for the political class, all of that is compounded by the timing of a big election that starts, with early voting, less than three months from now.

Ross Ramsey is executive editor and co-founder of The Texas Tribune, a nonprofit, nonpartisan media organization that informs Texans — and engages with them — about public policy, politics, government and statewide issues.