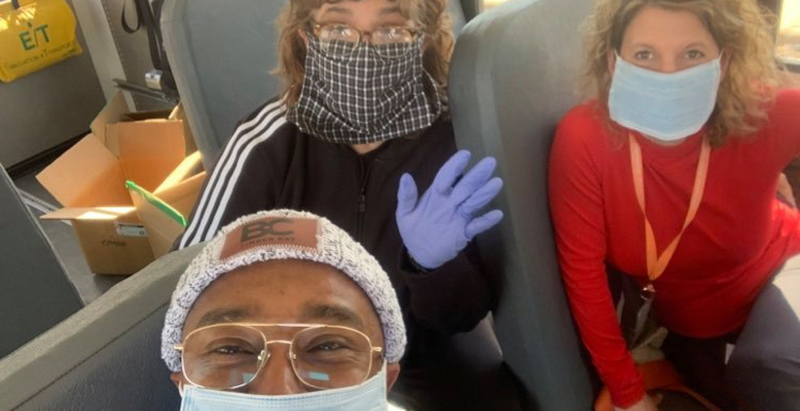 When Minnesota Gov. Tim Walz ordered his state’s schools closed, he directed them to continue to provide food for anyone 18 or under who needed it. Yet even as cafeterias were making the rapid switch to grab-and-go breakfasts and lunches, Rashad Turner was hearing from needy families who had no idea how to get those meals.

The founder of the Minnesota Parent Union, Turner and his team heard from 85 families in the first days after the closure was announced, with food insecurity topping the list of concerns, followed by where and when students could pick up Chromebooks and other technology.

For the most fragile public school families, Turner and other parent organizers and others say, long-standing gaps in the mechanisms that schools and districts use to communicate are in danger of becoming chasms. The communities that most need the safety nets schools are now providing need much more intensive outreach, they say.

“Imagine whatever cell phone you had two months ago, that’s been cut off because the bill wasn’t paid,” says Turner, who heads a team of 14 multilingual advocates who, before the pandemic, supported families in navigating everything from choosing a school to asserting their child’s academic and disciplinary rights. “The status quo ways of reaching out — what good is it if you have 1,000 people working on this and everyone’s not on the same page?”

Into these cracks between home and school have stepped family empowerment organizations, many newly organized as affiliates of the National Parents Union. One key advantage: They are already trusted visitors in families’ homes.

Turner, for instance, knew immediately where, geographically, follow-up was needed. After being asked the same questions about food distribution, internet connections and other school-based supports dozens of times, he created an old-fashioned flyer, visited public housing complexes and called on families at a shelter for victims of domestic violence, distributing photocopies.

As he ran into people, Turner also managed some expectations. School districts, he reminded parents, were still figuring out the answers to big questions about the rest of the school year.

“We hear the narratives about how parents don’t care, yada yada, but I’ve been impressed with the questions we’ve gotten,” he says. “Yes, they are concerned about how they’re going to pay rent, but a strong sense of ‘Our kids need to be educated in this time’ has really come through.”

In New Orleans, Our Voice Nuestra Voz Executive Director Mary Moran says she and her team have found that the best tactic is to ramp up their inquiries about families’ needs and schools’ plans, listening for disconnects.

“Over the last 2½ weeks, one of the big things we have done has been to check in with people on very specific indicators: health, food, distance learning, transportation, police interactions,” she says. “Some people have really just run out of food.”

Too few schools have sent out communications in Spanish, says Moran — or, for that matter, have thought past obvious conduits for information such as emails, robocalls and text messages.

“A lot of folks, their phone is disconnected, but their social media may still be on,” she says. Posting a letter to families on Facebook is less effective than personal communication via Messenger, WhatsApp or similar apps.

“Last week we spent a lot of time on the phone with CEOs and principals asking, ‘How well are you equipped to communicate with families? Do you need support with that?’” Moran adds. “By and large, everyone said, ‘Yes, we need support.’”

One of schools’ biggest challenges in locating families who are at risk of falling through the cracks is the tendency to communicate from the top down, versus tapping support staff who have the closest relationships with families. Principals and teachers, who typically handle schoolwide or classroom communications, are overwhelmingly white. Support staff are more likely to be people of color living in the same communities as low-income students.

“This is the unique challenge of right now,” Moran says. “Schools as a whole may not have those relationships, but there’s someone in that building that does.”

Judith Yáñez, the founder of RootED Northwest Arkansas, and about a dozen parents have been working for three years to help families navigate their school options. A large number are Latinos who don’t speak English and typically don’t see notices about school closings or emergency services. When they do receive communications from schools and public agencies, frequently they don’t respond out of fears arising from someone’s immigration status.

“Our families just stay silent,” says Yáñez. “So we’re having to step up for them. … I have to call and ask, ‘What is the process, and do you have to have documentation?’”

“And then I have to ask myself, ‘Do I feel confident sending a family to this, or do I have to go get it myself?’”

In the western suburbs of Minneapolis, Intermediate District 287 serves about 1,000 students referred for unique and intensive support from 11 surrounding traditional districts. Many have profound disabilities, intensive behavioral needs or challenges such as being teen parents themselves. They are spread across a wide geographic area.

Several days ago, Director of Communications Rachel Hicks sent out a survey asking about families’ needs. She got a reply from one parent whose niece lives in an isolated and impoverished corner of Minneapolis but attends school in a suburban district.

The girl’s family had no food, toilet paper or gas to get to a store, Hicks recalls: “We talked about things like just needing hand soap. Hand soap — the No. 1 thing public health officials are telling us we need to be safe. It was heartbreaking.”

Hicks alerted a school board member in Richfield, the city where the girl goes to school, so social workers could follow up. And she put the family on the list of households getting donated food distributed via school bus.

Riding one of those buses recently was Sammy White, a student safety coach at the district’s North Education Center. Himself the product of an education that left him susceptible to the dangers of the streets, White under normal circumstances spends a lot of time making sure kids feel seen and heard.

Now, he says, from his porch, he can see students walking in groups and tries to check in on them, albeit from a distance. He tries to assume they’re making good choices, he says, experience having taught him that an accusatory tone will just drive alienated young people further underground.

“If I only know one or two, I may have to pull them to the side and maybe have a more intimate moment,” he says.

By mid-morning on a recent day, White’s bus had delivered food to nine of 11 houses on the route, collecting information about how each family was doing. His immediate impression: In some ways, the challenges that will come when students go back to school will be harder to anticipate than the ones schools confront right now.

“For us, we find ways as adults to cope,” he says. “But our kids are reactive in the moment. They need help understanding their feelings.”

Moran, too, is thinking about relationships as the glue that will help hold things together as schools look to the future.

“Everyone is in a place of fear. We don’t really know what’s next,” she says. “Within that, there is an opportunity to create consistency and to provide a pathway for how we move out of this.”