The American Federation of Teachers is only about half the size of the National Education Association, and its ranks are filled with many members who work outside the field of K-12 public education. Nevertheless, its influence extends beyond its size. This is mostly because of where the bulk of its membership is located. AFT represents school employees — or shares representation with NEA — in nine of America’s 10 largest districts.

Though similar in policies and focus, AFT is structured differently than NEA. Since NEA comprises about 13,000 mostly small local affiliates, state affiliates are its main source of funding, staff and services. Conversely, AFT has very large urban locals but limited or no presence in many states. It only makes sense for its locals to handle the load.

That structure makes it difficult to paint a comprehensive picture of the union’s finances. A rundown of state affiliate finances, such as the one I compiled for NEA, would omit a major component of revenues (the locals), while a rundown of local finances would be a herculean, if not impossible, task.

What I’ve created here is a 2017-18 financial status table for AFT’s national headquarters and its K-12 local affiliates that are about as large as, or larger than, the smallest NEA state affiliate. The figures are culled from each union’s financial disclosure report to the Internal Revenue Service. I’ve left out AFT’s state and municipal employee affiliates, its nursing and health care affiliates, and its higher ed affiliates. 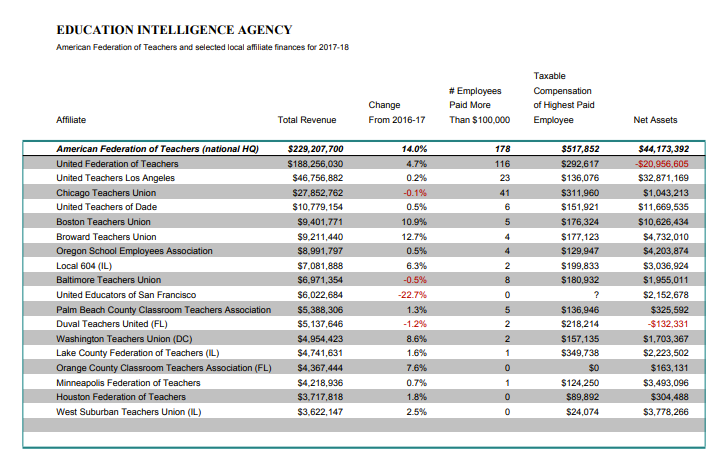 If you add up the revenues for AFT and these 18 affiliates, the total comes to $587 million — but the accounting is not that easy. Most local affiliates count the dues they collect for AFT national as income, and as expenditures when they send the money to Washington, D.C. To make a confusing situation more so, AFT then returns a portion of national dues to locals as subsidies.

If I tried to net that all out, I’m sure I’d make an error, so instead I report what each union reported as revenue, and add the caveat that some of its income was passed on to AFT national headquarters.

With that out of the way, you can see that AFT had a very healthy 2017-18 school year, with revenues up by 14 percent. Its $44 million net worth is substantially lower than NEA’s, but it doesn’t seem to be in any financial danger. AFT paid its president, Randi Weingarten, $517,852 that year, which was more than $100,000 more than NEA paid its president, Lily Eskelsen García.

The United Federation of Teachers, with 125,000 members working in the New York City public schools, also had a very good year. Its revenues were up 4.7 percent, though it maintained a net worth of negative $21 million, suggesting that UFT has yet to get a handle on its liabilities.

No large AFT local affiliate had an exceptionally bad year, with the exception of United Educators of San Francisco. That local saw its revenues drop almost 23 percent while its payroll costs increased 41 percent. The union reported that none of its 30 employees earned more than $100,000, so we don’t know what the highest-paid worker received.

The other mystery comes courtesy of the Orange County Classroom Teachers Association in Florida, which reported it had no employees but $38,261 in compensation expenditures. The union also reported that its four elected officers did no work — zero — for the organization.

I should also mention that 2017-18 financial reports were unavailable for two local affiliates that would have otherwise made this list, the Alliance of Dallas Educators and the Philadelphia Federation of Teachers. A third affiliate, the Asociación de Maestros de Puerto Rico, had its tax-exempt status revoked in 2012. As of September 2019, it had not been restored.

While it may be impossible to compile a comprehensive accounting of teacher union revenues, it is clear from these numbers that NEA, AFT and their major affiliates collect income tax-exempt revenue well in excess of $2 billion annually. Don’t expect them to run out of money anytime soon.