Riccards — Beyond Growth and Proficiency Lies Mastery: DeVos and the Crowning of Competence as King 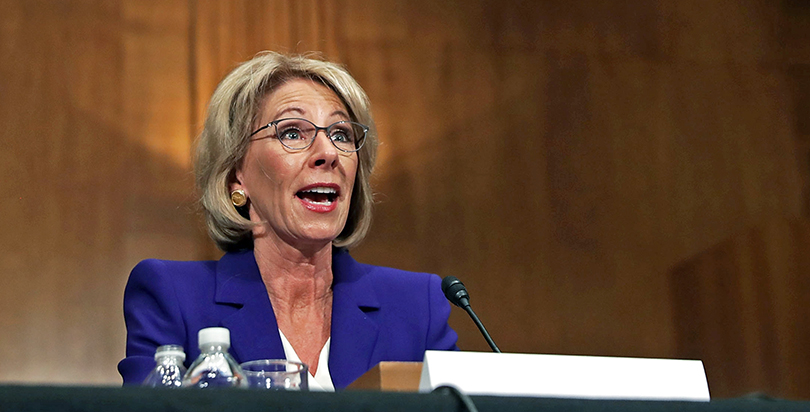 During the confirmation hearing on U.S. Education Secretary Betsy DeVos back in February, many in the education community were quick to assail DeVos over her handling of a question as to whether she favored proficiency or growth when it came to valuing student achievement.

For some, the line of questioning opened an important debate on both metrics, serving as a reminder that our public schools were shifting from a growth model embodied in the Adequate Yearly Progress (AYP) measure of No Child Left Behind (NCLB) to a proficiency model in the still-taking-shape Every Student Succeeds Act (ESSA). For others, it was simply another proof point that the edu-emperor had no psychometric clothes.

If recent events are any indication, it looks like DeVos and her brain trust have done a great deal of evolutionary thinking on the top floor of Maryland Avenue, SE. In a recent radio interview in Indiana, DeVos was again asked to take the proficiency-versus-growth taste test. And this time she opened door number three — mastery.

Since the U.S. made K-12 education compulsory, we have been measuring success in much the same way. An academic year was successful if one attended most of the 180 school days on the calendar. We know whether or not those days were successful by taking a single measurement during that year — typically a state exam — to provide a summative benchmark. Serve your time in a school desk, successfully prep for a single test, and you are promoted to the next grade. Rinse and repeat until high school is completed.

Such a time-dependent, single-measure model of school achievement may be today’s predominant mode of education, but it does not have to be the path that the schools of tomorrow choose to follow. By seeking to move the discussion from proficiency to mastery, DeVos demonstrates how yesterday’s modes of thinking — modes still used today — do not have to drive the schools of tomorrow.

Imagine success measured not by what is taught, but instead by what is learned.

Imagine success demonstrated by both what learners know and what they are able to do with that knowledge.

Imagine success documented not by a single test measuring a discrete piece of knowledge, but instead by multiple measures that determine how that knowledge is used in various ways, in conjunction with other pieces of knowledge.

Imagine learning that is as diverse as those engaged in it, in a learning environment that recognizes that students are no longer homogeneous and instead come to school with a range of experiences, knowledge, skills, abilities, learning styles, and other cognitive factors.

Imagine discussions on teaching and learning that are about the student, and not about the system.

Imagine what can be imagined.

Intentionally or not, DeVos has now opened the rhetorical door to what is possible when it comes to learning and learning mastery. As she came into the job, DeVos made clear that the type of learning environment was inconsequential. Whether it be a traditional community public school, public charter school, private school (funded with or without vouchers), or home school environment, all played a part in her vision for the future of K-12 education.

Now, by jettisoning the debate on proficiency versus growth for a more productive discussion of mastery, she is making clear that what a student learns and is able to do with those lessons is the key factor. DeVos has laid down a rhetorical marker that the top-down, one-test-fits-all model may indeed be a thing of the past.

The great challenge now is how to move these ideas into practice. In states like New Hampshire and Rhode Island, we are already seeing K-12 school systems shift to competency-based approaches that place mastery above all other metrics. ESSA already allows for such efforts, and the federal government has been funding school districts across the country to innovate in such a direction. So the process has begun, whether we realize it or not.

The next step will be attempting similar models in higher education, particularly in teacher education. While competency-based learning has been found in American higher education for decades, the time-based, Carnegie-unit model still reigns. But if we are looking for K-12 schools to shift to an emphasis on student mastery, it goes without saying those schools need teachers who were prepared in similar models.

Partisanship cannot and should not keep us from a future focused on what students both know and are able to do. Nor should it keep us from the deeper, multi-faceted learning mastery-based instruction offers. It is time to invest our efforts, regardless of the party in power, in support of the learning of the future.

Patrick Riccards is the chief communications and strategy officer of the Woodrow Wilson National Fellowship Foundation and the author of the Eduflack blog.

Patrick Riccards is the executive director of Best in the World Teachers. Patrick previously served as chief of staff to the National Reading Panel and as director of the federal Partnership for Reading Collaborative. He is the author of Why Kids Can’t Read: Continuing to Challenge the Status Quo in Education.