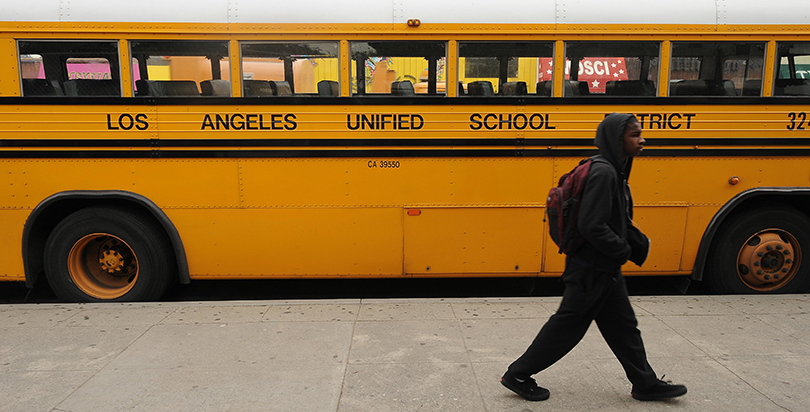 When I was a teacher in Watts, my students and I sued the Los Angeles Unified School District. Our goal? To force the district to respect its mandate to educate all students. We—and later a court — believed that LAUSD had abdicated their responsibility to protect the rights of its most vulnerable students and something had to be done. When I read the recently released memo outlining a plan to create more high-quality public charter schools in LA, I knew that its authors felt the same way.
School Board President Steve Zimmer denounced the effort — which would create 260 new public schools over the next eight years—and even went so far as to decry it “an outline for a hostile takeover.” But if I were a shareholder of LAUSD — and as a taxpayer, I guess we all are — I might welcome a hostile takeover.
In fact, a hostile takeover might be precisely what our district needs.
When we brought the aforementioned case in early 2009, only four percent of eighth graders at Markham Middle School were proficient in math.  Half a decade later, that number stands at only 6 percent. How can the leadership of this district justify being so adverse to outside help when 94 percent of students at a large middle school are failing?  How can they shun innovation when the proficiency rate has risen a paltry two points in five years?
Is the charter plan guaranteed to succeed? Of course not. And if it fails, we’ll try something new. But it’s time that this Board and this District disenthrall themselves from a status quo that is failing everyone besides the bureaucracy. When only 26 percent of eleventh graders are on track to graduate college-ready, a district has lost its right to have a monopoly over education. And besides providing much-needed options, the proliferation of new schools has the potential to improve existing schools as well.
Private-public partnerships, like charter schools that are privately operated but run with public dollars and public oversight, have proven successful across sectors, including in the fields of health care, affordable housing, and national defense. And one only has to look at FedEx and UPS to realize the benefits of private operators at times spurring innovation — and providing choice — in sectors traditionally run only by government. As President Obama said of charters, they have “demonstrated that innovation yields results that benefit all students.”
President Obama is not alone in this view. Parents across our city are demanding choice. In what is surely an indictment of the status quo, over 150,000 families have chosen public charter schools in LA, more than any other city in the country. And at least 40,000 additional families are on waiting lists.
It is no wonder parents are voting with their feet. Numerous studies have found that charters in LA have been outperforming their district counterparts. Rather than antagonizing these schools, the district should be learning from them. Critics of charters may point out that the district’s own magnet schools outperformed charters in certain cases, but that’s an argument for allowing more innovation within the district, not less. The true promise of charters is to spur innovation and improvement within the district by serving as laboratories of experimentation and providing choice to parents so that traditional schools — magnets included — need to compete for students. The success of magnets may be proof that charters are doing their job.
And if charters are not serving all students well, then they can be shut down. Arguments such as those made by Board Member Scott Schmerelson that charters “negate accountability to taxpayers” are maddeningly inaccurate. Charters are far and away more accountable than traditional schools that can stay open for decades irrespective of performance.
I believe LAUSD can become a district that befits the creativity and innovation of the city in which it operates. But that will only happen when it becomes more a “system of schools” than a “school system” — when it stops adhering to an orthodoxy that is not working.
Until every parent in Los Angeles can say that they would send their child to any school in LAUSD, then a hostile takeover may be just what we need.
Photo by Getty Images
Submit a Letter to the Editor
October 1, 2015

Nick is an attorney who is currently working as an independent consultant to education nonprofits. He is also an Adjunct Faculty Member at Loyola Marymount University, where he teaches a course on Education Law. Most recently, Nick was the Director of Policy and Legal Counsel for Great Public Schools: Los Angeles, an organization dedicated to improving the governance of the Los Angeles Unified School District. Nick’s path was inspired by his time teaching at an LAUSD middle school in Watts, Los Angeles as part of Teach For America.