Marchitello: Why Betsy DeVos Could Be a Boon for Progressive Education Advocates 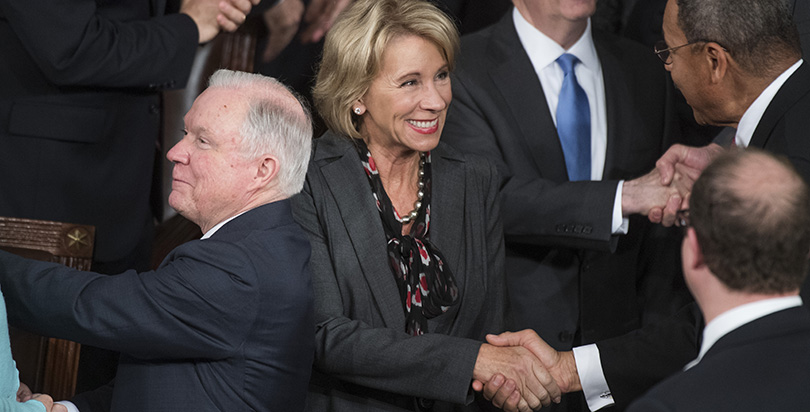 Despite protests, petitions, and roughly 1.5 million calls daily to Congress, the U.S. Senate confirmed billionaire Betsy DeVos as the next secretary of education by the narrowest margin in history.

But even with this disheartening defeat of the mass mobilization of those opposing DeVos, it is actually a great time to be progressive on education policy.

That conclusion may seem surprising since DeVos appears uninterested in progressive policy priorities. While we want to invest more resources in schools serving historically marginalized students, she instead believes the solution is to open federal coffers to fund private, often religious, schools.

The fact that our agenda will largely fall on deaf ears can actually be freeing. Knowing that we are unlikely to win meaningful victories, there is an opportunity for progressives, civil rights groups, and education reformers to decide what a unified progressive vision for public education could be moving forward.

Of course, this is not to say we shouldn’t keep advocating and guarding against bad policies. Rather, the valuable work that we have all been doing in our respective remits now needs to come together in a new way. And, since the DeVos-led Department of Education is unlikely to take up individual pieces of our agenda, we should instead make the biggest, boldest case we can. Then we must communicate that vision to people across the country. At this point, Congress and the department are secondary.

For too long the left’s message on education has been muddled. That was partly because the Obama administration’s openness to some of our ideas produced a degree of competition among our priorities. But a lot of it was due to the tension between those policies and reforms focused on students and those that prioritize adults. Civil rights and other advocates have for decades argued for more equitable school funding and ensuring that high-poverty schools receive at least as much money per pupil as low-poverty schools. But, fearing forced transfers, teachers unions often vehemently oppose policies that would require districts to close funding disparities. In other words, the needs of teachers and students were set in opposition to one another, as adversaries rather than allies — one’s gain was the other’s loss.

The student-versus-adult tension was on display during the reauthorization of the Elementary and Secondary Education Act in 2015, when many progressives were unhappy with the proposed (now codified) accountability system. The problem was that we didn’t have a good answer when lawmakers asked what we did want.

One part of a more unified progressive vision of public education might be to reimagine how accountability systems function at the state, district, and school levels. As it stands now, the punitive aspects of accountability largely fall on schools, while districts and states are mostly off the hook. That’s a problem since generally schools on their own are poorly positioned to make many of the changes necessary to improve student achievement. For example, schools have no control over whether they receive equitable funding. These funding disparities beget other disparities, such as the distribution of effective teachers, or access to AP courses. It’s a vicious cycle.

To counteract this structural problem that builds inequities or disadvantages into the very mechanisms of accountability, progressives could develop a different paradigm that is more carefully aligned with the capacities for improvement at the school, district, and state levels. A new federal accountability system could hold states accountable for the overall health of the system, for the equitability of its school finance system, and for districts responding effectively to underperforming schools. Districts would be accountable for equitably funding schools with local revenue while also ensuring all students have equitable access to critical education resources. Schools would be accountable for school-level activities, such as reducing discipline disparities and improving teaching quality. In short, create a system that holds institutions accountable for the things that are actually within their control.

This may seem like a Sisyphean task considering Trump is in the White House and DeVos runs the Department of Education. But the good news is that the last election — despite its Electoral College outcome — gave progressives a mandate to pursue their agenda. Remember, millions more Americans voted for Hillary Clinton than for Donald Trump. Equity, inclusion, and a belief that government should do more to protect underserved and marginalized populations were at the core of her agenda. That’s what the majority of Americans want. So we should take that desire and put it to work to ensure public schools focus on equity, better serve all students from all backgrounds, combat discrimination, and prepare all students for college and career.

This is not too much to ask. But to make it real, we need to be able to explain how all of this fits together — and we need to do this not only to enlist members of Congress but, more important, to enlist and to energize the public in support of this broadened vision. I believe that the most effective resistance to a bad agenda is to offer a better solution. So we need to seize this opportunity to negotiate our differences among ourselves and then broadcast our bold new vision of the world we want.