Bradford: When the Cost of Admission Is Paying Off a College, Americans Are Outraged. But When It’s the Price of a House Near a Good School, There’s Silence 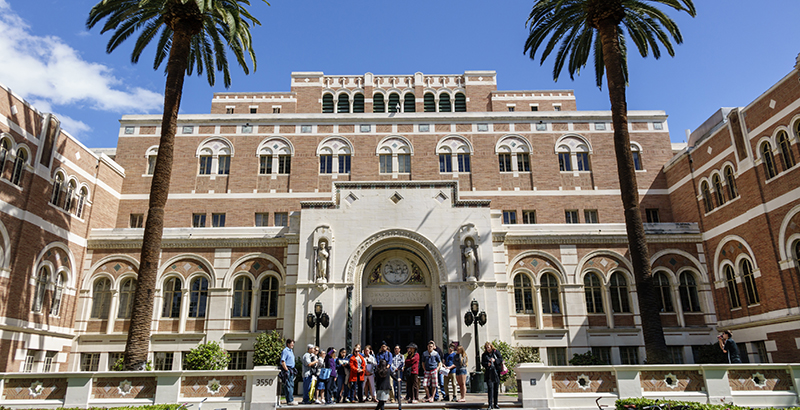 Teen students take a tour of the University of Southern California. (Jeffrey Greenberg/UIG via Getty Images)

Meritocracy is a cornerstone of the American ideological edifice. Or at least it was, until the FBI took a sledgehammer to it as it revealed Operation Varsity Blues: a sting that outed a long-running pay-to-play scam at some of the country’s best-known colleges and universities. The details — the bulk of which amount to Mafia-style interstate racketeering — have quickly become the stuff of Twitter trends. Righteous (and justified) indignation mixed with bitter schadenfreude has rarely been more plentiful.

Certainly, part of the current anti-privilege mood is implicated in all of this. Two wealthy celebrities are the faces of the conspiracy — the payouts they made are eye-popping to any ordinary citizen — even though they were not the greatest of the scheme’s offenders. The moralizing on bad parenting and setting the right example from many is deep, and again, pretty justified, even before the plight of the student who “might” have been admitted to one of these schools is discussed.

“I don’t know how much of school I’m gonna attend…but I do want the experience of like game days, partying…I don’t really care about school, as you guys all know.”#AuntBecky had to pay bribes to get her in school.pic.twitter.com/flWmx2XkHQ

For every child who doesn’t know how much school he or she will attend, there could be a hardworking striver out there, someone eager to take on the challenge of college and reach his or her full potential. In all these cases, it seems unlikely we will ever know.

In a rare moment of political and social clarity, the takeaways (at least one of them) from this debacle seem to be clear. Americans don’t think you should be able to buy your way to the front of the line to get a great college education. And, I suspect, they don’t think the way to fix this problem is to let “higher education” figure it out on its own. Surely the apparatchiks can’t be trusted to eliminate the breadlines — they are too busy eating caviar as folks queue up for their daily ration to change things.

All of which brings up the question: If this behavior is so reprehensible at the college level, why is it completely acceptable in K-12 education across this country?

Some might believe this is a long leap, but it isn’t. The “best” education in America is always purchased — occasionally with tuition, but more often with a mortgage. Indeed, the mortgage to a “great” public school district routinely dwarfs tuition at any private school. The $600,000 house that is the cost of admission to your free, neighborhood public school in the Northeast makes the bribes paid by many Varsity Blues offenders seem a comparable pittance. And while the appetite to attack the college conspirators is voracious, on the K-12 side you’ll find no volleys at privilege; merely the wagon-circling of the defenders of neighborhood public schools both clutching their pearls and looking the other way. Paying off a college official is bad, but gaining school access through America’s skewed housing market is OK?

I guess it’s easy to hurl slights at the front of the line until you’re at its head yourself.

And what of America’s K-12 issues as they pertain to those striving students looking for a school that’s the right fit but who are chronically assigned to ones with long records of underperformance? These same families are asked to put their ambition, their hard work, their futures, and their faith in “the system” instead of being given some leverage against it or, perhaps, a ticket out. Surely all the expertise to fix what ails our schools lies in a universe that must also reconcile the demands of striking teachers, the privilege of self-serving elitists, celebrities who sequester themselves in public schools with opaque admissions requirements and politicos of one flavor or another on their way to the next office while trying to make a point for the cameras. Among all constellations of interests, this one must be able to solve its own problems to ensure all students get a fair shake, no?

I won’t hold my breath.

Hypocrisy abounds in the overlap between the college scam and the one in K-12 that uses the housing market as the proxy for the buying and selling of schools and that asks the divided interests of the country’s school districts — which are notably entangled in the creation of the problem — to untie themselves as they solve it. The hypocrisy is bad, but the symmetry here is worse. And now is the perfect time for the righteous defenders of the House-to-Schooling Pipeline, aghast at how money and privilege manipulate the world of higher education, to take a very, very long look in the mirror.