Analysis: This Poor, Rural Maryland District Is Beating the Odds in Math. Here’s How They Do It, and What I Saw in Their Schools 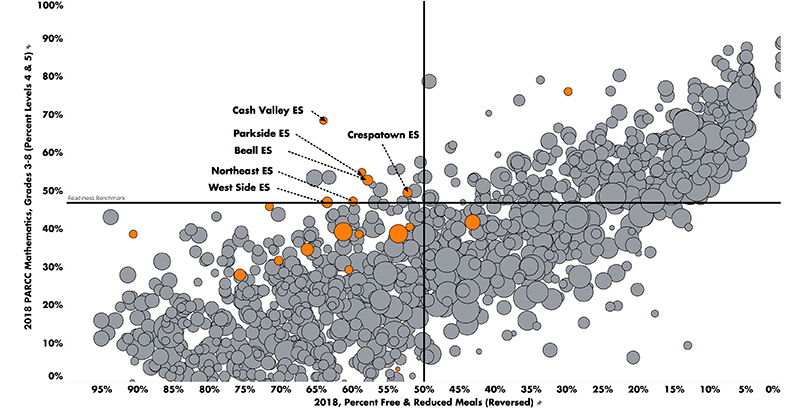 Last year, colleagues and I tried to launch a network of schools to improve math achievement across the Mid-Atlantic states. We didn’t win the outside funding we needed, but along the way we discovered a surprising bright spot: the school district with the greatest number of high-poverty elementary schools beating the odds in Maryland (and second-highest among all the states in the PARCC testing consortium) is one you’ve probably never heard of: the small-city and rural Allegany County.

Nationally, very few schools — about 3 percent — have both high poverty rates and high student achievement. Of the 1,200 elementary and middle schools in Maryland shown below (each circle represents the size of a school, with the poorest schools on the far left), only 23 are in the upper left tier, considered to be beating the odds. Allegany has six such schools, shown in orange, and six more that are close to high-performing. For comparison, Montgomery County, the nation’s 17th-largest school district in suburban Washington, D.C., has 82 schools where more than half of all students qualify for free and reduced-price lunch, yet only three of them are beating the odds.

What’s Allegany County doing differently? What lessons might there be for other districts seeking to break the link between students’ learning and their socioeconomic background? The answer is straightforward, if unsexy: a steady effort across the district to create coherent learning systems of professional development and coaching, curriculum matched closely to assessments and extra time for all students, all bound together by a strong vision from the district’s leadership.

Take Beall Elementary, which still has an open floor plan, with no walls between classrooms, that was in vogue when the school was built in 1974. During a recent visit, my colleagues and I watched as a small group of students in Shari Ross’s fourth-grade math class arranged 11 decimals, from 0.4 to 8.7, in order from smallest to largest. Ross then instructed:

“I’m going to give you each two index cards, and you must come up with two new decimals you can place in this number line. But you have to include a number that goes to the hundredths place.” The first two students successfully completed the task. A third student wrote 2.055 and placed it between 2.5 and 3.3 in the number line.

Across the way, math teacher Carly McGann was working with a small group on a similar lesson involving decimals, while the rest of the class worked independently. Five students used laptops to complete math problems in a supplemental online program.

To solve 18 x 18, one student approached the problem conceptually, rather than with the familiar procedure of “carry the 6 and add a 0” that most of us learned in school. He put the laptop down and sketched an area model on his whiteboard: 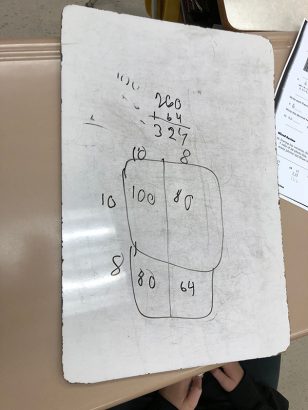 The need for standards-based math lessons became clear in 2012-13, with the challenges of transitioning to Common Core. Chief Academic Officer Kim Green-Kalbaugh and Mike McGowan, head of elementary math and science, hired a well-regarded professional learning services firm to spend two years training teachers and coaches. The math consultants worked with teachers half a day once a month to interpret the new standards and help them understand the implications for changing everyday teaching. The standards ask educators to make a giant shift, to balance an emphasis on teaching math procedures (the steps you take to solve a problem) with applications and conceptual understanding (why steps taken to reach an answer make sense). They also learned how to use Number Talks, short discussions where teachers present problems and don’t tell students how to solve them but quickly elicit their reasoning and thinking.

“I love math and had a really hard time at the beginning with fractions,” said McGann. “Why can’t I just teach the procedures?” But now, she said, she sees the benefit — having students who have been taught conceptually in earlier grades. It makes teaching easier, she said, because the kids understand why they’re doing what they’re doing.

Ross said students are communicating more with the teachers and with one another than ever before. “They’re not afraid to raise their hand and answer questions. They see that mistakes are OK because we learn from each other’s mistakes,” she said.

In 2014-15, the consultants worked with the district coaches to develop a new curriculum framework and pacing guides that lay out what should be taught each month, within and across grades. The coaches, in turn, worked with cadres of teachers from around the district to create instructional units (approximately 5 to 6 per course) and links to resources kept in a district portal. The units line up with similar ones created by Eureka Math, which is one of only 12 curricula rated as “rigorous and coherent” by EdReports.org. But the district doesn’t have a single textbook used by all teachers. The pacing guides and units help drive consistency across schools, but not everyone is expected to be on the same page of the same textbook every day. Teachers have broad latitude — or “voice and choice,” as McGowan said — about their lesson plans.

Allegany used to give its own quarterly benchmark assessments, but it had to roll them back under the state’s cap limiting time on testing. Three times a year, teachers give commercially available interim tests, which predict and report student growth over time. The results are linked with student grades and PARCC scores in a Google spreadsheet, so teachers can see not just the data from the current year but also each student’s learning trajectory over the previous three years.

The three math specialists split their time across 10 of the district’s 14 Title I schools and use data to anchor their weekly meetings with grade-level teams. The specialists sit with teachers, reviewing data to create small groups of students with similar needs and prepare the next week’s lessons. Principals support this work and ensure follow-through. In between, there are lots of online group chats to help teachers resolve instructional issues big and small. In 2017, they also began analyzing the released student examples of the hardest test questions from PARCC. For the current school year, the districtwide focus is on reasoning and modeling because their PARCC scores were low in these areas. According to Jamie Clark, one of the specialists, they use the items to discuss specific students in depth.

The specialists don’t have an observation tool for evaluating how well math is being taught (such as Harvard University’s Mathematical Quality of Instruction) and lack formal authority to evaluate teachers, but they prefer it this way. This, said Clark, allows them to go into classrooms to offer feedback when a teacher wants it. Research by Mary Kennedy of Michigan State University finds that this approach — coaches collaborating with teachers on planning lessons and developing strategies for struggling students — is more effective than having the power to evaluate.

A final important factor is extra time. Allegany elementary schools allocate nearly an hour and a half each day for math, which gives plenty of opportunity for full-class and small-group work as well as independent time.

A recent analysis by Eric Hanushek and Paul Peterson found that in American schools, the achievement gap has stubbornly persisted for the past 50 years. But Allegany, a district with 61 percent of students receiving free or reduced-price school lunch, performs just as well as Maryland schools with 20 percent fewer students in poverty. The district is outperforming its predicted achievement by 17 percentage points.

Allegany is closing the gap by having a coherent vision for math instruction — a common set of curriculum units, anchored by more conceptual teaching, integrated with assessments, data analysis and frequent learning opportunities for teachers, led by the math specialists.

“We want teachers to focus on things in their control,” said McGowan. “We want to move forward every year. We have 14 elementary schools, and they’re not all beating the odds. We’re not satisfied.”