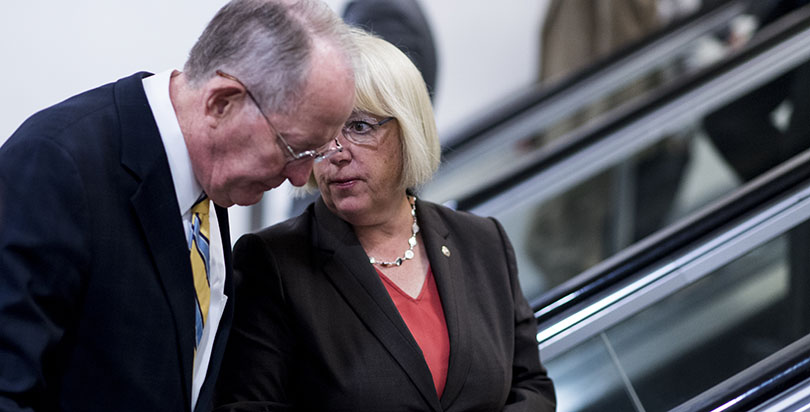 “There are a number of issues with the American health care system, but if your house is on fire, you want to put out the fire, and the fire in this case is the individual health insurance market,” Alexander said. “Both Republicans and Democrats agree on this.”

He emphasized that he’ll work with Murray, his Democratic counterpart, and with the leaders of the Senate Finance Committee, whose jurisdiction overlaps with the HELP Committee on some health care issues.

Murray, in a tweet expressing her happiness at working with the Republican Alexander, noted, “We’ve tackled tough issues together before!”

With Trumpcare rejected in Senate, I'm glad to get to work on health care w/ @SenAlexander. We've tackled tough issues together before! -PM https://t.co/rhV4D0Yc28

One of those tough issues was their bipartisan push to rewrite No Child Left Behind, which kicked off with that February 2015 announcement that they’d work together.

“We know our constituents expect us to fix this broken law [NCLB] and improve education for students, families, and communities across the country — and we expect to succeed,” they wrote then.

The bipartisan Senate NCLB rewrite — which became the Every Student Succeeds Act — came after failed efforts to advance a partisan bill in the upper chamber the previous year. And, much as in the health care debate, restive arch-conservatives in the House nearly torpedoed an already conservative education rewrite that got no votes from Democrats, forcing leaders to delay the vote and reconsider a modified version later.

Though the partisan differences on health care seem insurmountable, the huge questions and ideological differences on education were no easy lift, either.

The education bill forced members to consider such large fundamental issues as the appropriate role of the federal government in K-12 education, balancing conservatives’ desire for a hands-off approach against liberals’ concerns over protecting civil rights, as well as smaller — but no less charged — concerns such as which grant programs to fund.

Throughout the legislative process, more fights arose that could have sunk the effort. A push by Democrats to add anti-bullying provisions nearly stalled committee approval, while a fight over the formula used to dole out federal dollars almost halted movement on the Senate floor.

Alexander and Murray, though, managed to earn unanimous approval from the HELP Committee, which runs the ideological gamut from conservative Sen. Rand Paul to progressive Sen. Elizabeth Warren, to advance the bill to the floor, and then gained the support of more than 80 senators for the final bill. Then-President Barack Obama famously called its passage a Christmas miracle.

The law was one of the few large-scale bipartisan accomplishments passed between the Republicans retaking control of the Senate in 2014 and the end of the Obama presidency.

To be sure, that goodwill was short-lived: Alexander balked at the Obama administration’s proposed regulations to implement the bill, and Democrats have expressed frustration at Republicans’ overturning one of those rules earlier this year.

(The 74: The ‘Miraculous’ Rise and Ugly Fall of ESSA: Is Congress’s Education Coalition Too Broken to Tackle Higher Ed?)

Relationships on the committee reached a very public new low early this year, in no small part over the confirmation of Education Secretary Betsy DeVos.

But both Alexander and Murray are more pragmatic dealmakers than partisan hacks.

Murray crafted a budget deal in 2013 with no less a conservative than now–House Speaker Paul Ryan. Alexander quit the Republican Party leadership in 2011 to work on more bipartisan issues and challenged the Trump administration’s early moves on the implementation of ESSA.

(The 74: A Summer Education Meltdown: Why Everyone in DC Is Mad About ESSA, Congress, Charters, Choice – or All of the Above)

Their hyperfocused effort on the individual market should avoid many of the thorniest health-related issues, like whether the federal government should fund Planned Parenthood.

Signs are looking good that the dynamic ESSA duo can, in the favorite words of the chairman, once again “get a result.”